Q. Is a 'reflection filter' worth the money? Skip to main content

Q. Is a 'reflection filter' worth the money?

I've been thinking about trying out an SE Reflexion Filter or similar device. So far, however, I've been hearing mixed reviews and seeing a lot of DIY stuff when looking them up. Some folks say that they're not worth the money, but the DIY options — hanging duvets and hooking up foam contraptions — look so complicated that I figure it must be, to a certain extent. My studio is treated, but I'd still like to tighten up on the vocal side of things. I've been going back and forth looking at different options, but I just don't know whether it's worth it and don't know anyone who has one I can try. Can you give me some advice?

SOS Technical Editor Hugh Robjohns replies: All of these products are useful to some extent, but they aren't a magical cure‑all and can't instantly turn a bad‑sounding room into a good one. Most people use cardioid‑pattern mics for recording vocals and, if you think about the physics of the situation, the mic is therefore most sensitive in the direction facing the performer, and only slightly less sensitive to the sides. So it's going to pick up any sound reflected from rear and side walls that bounces back over the shoulders and around the performer.

It should be obvious, then, that the single most important area to treat with sound-absorption material is directly behind and to the sides of the performer. This is why we champion the SOS mantra of hanging a duvet (or similar) behind the vocalist: it really does make a massive difference to any recording sessions (unless you are lucky enough to have a properly treated studio). 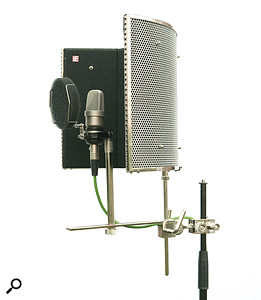 As a vocal mic is so sensitive in the direction of the singer, it will pick up reflections from any walls or surfaces behind and to the sides of the singer, so whether you decide to use a reflection filter or not, acoustic treatment in these areas is a priority. A Reflexion Filter or similar device is designed to absorb some of the sound that would hit the rear of the mic, so if you're thinking of buying one, it makes sense to use it in conjunction with acoustic treatment to the rear of the performer, rather than simply using one or the other. 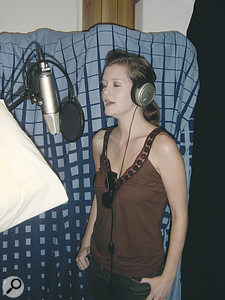 The idea of the reflection filter type of product is to provide some helpful absorption of sounds that would otherwise reach the rear-facing sides of the mic, and also to catch and absorb some of the direct sound from the vocalist. The latter helps to minimise the amount of energy that gets out into the room in the first place, thus reducing the amount that subsequently bounces around to get back into the mic.

The differences between the various alternative filter designs really come down to the usual compromises of size, weight, cost and the efficiency of their low‑frequency absorption. Bigger is generally better, as is thicker (both lower the LF‑absorption frequency roll-off).

Whereas most products use a simple acoustic foam panel, the SE design uses clever multi‑layer panel construction, which is designed to extend the LF performance without making the unit excessively heavy or thicker! However, simple DIY filter constructions can be virtually as effective as commercial versions, and if you have an experimental nature I'd certainly recommend having some fun with a foam panel to see whether the idea is useful to your specific recording situation or not!

However, start with the absorbers behind the performer — the ubiquitous duvet — because that will make much more of an improvement.

From DX to MODX with Manny Fernandez | Podcast
4 days 6 hours ago.