Q. Should I choose Windows 8 or 10? Skip to main content 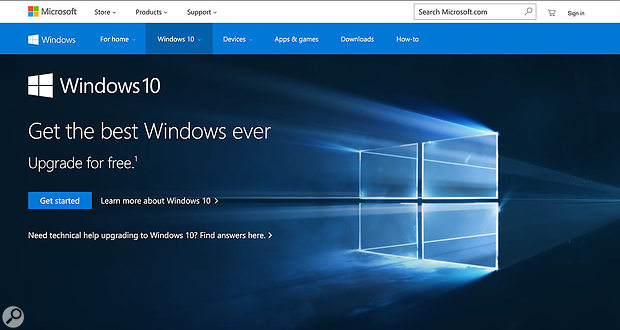 I’m currently looking into a new music PC build and wondered which Windows operating system you’d recommend I opt for at this time. What advice are you able to offer me?

SOS contributor Pete Gardner replies: There are many musicians and engineers still happily running Windows 7 systems, but with that version of Microsoft’s OS having entered its ‘extended support phase’ at the start of this year, and with its production now long ceased, the choice for a new machine’s primary installation is pretty much exclusively between Windows 8.1 or Windows 10. Whether Windows 10’s particular benefits will appeal to you depends to some extent on what you wish to do with this machine, as I’ll explain below.

Windows 8’s GUI may sometimes have been divisive with users but by the time the 8.1 was released this had been refined and was much improved. The underlying engine also proved to be more efficient and better performing than the older operating system — generally a big improvement. Windows 10 takes all those improvements and makes further changes in the layout and design which, so far, seem to be getting positive feedback from many users (though, as always, your own views may differ!). Along with those changes are a number of improvements in the native WASAPI (Windows Audio Session Application Program Interface) and MIDI drivers that may hold appeal for the average music maker.

The new MIDI API allows multi-client access to a single piece of MIDI hardware, along with jitter-free operation and other smaller bug fixes. With this API being implemented across all of the Windows 10 builds, right down to the editions catering for Raspberry Pi-style devices, it could open up the possibility to piece together some interesting controllers in the future, as well as being a general benefit to those who rely on MIDI on a daily basis.

Also touted by Microsoft are the improvements to the ‘audio stack’ and WASAPI itself — the native equivalent of ASIO drivers for handling internal audio routing. Having had a chance to run some tests, I’ve found that the claimed 15 percent improvement over the older WASAPIs seems to be holding true; if anything, it may be a conservative claim. This may prove useful for some applications, especially those running on mobile Windows devices, but the performance is still not as good as with a decent set of ASIO drivers. So for recording and getting the best out of your main music-production machine ASIO remains the way to go, whichever OS version you choose.

For those looking to move from Windows 7 or 8.1 to Windows 10, rather than to buy the whole OS license afresh, there’s a one-year window in which to accept a free upgrade, and I’d recommend taking full advantage of this generous window of time. The early days of the Windows 10 roll-out saw some big surprises for some audio manufacturers and developers: there was a flurry of announcements from various software and hardware manufacturers advising users to hold back until they can release updates and drivers to fix bugs and ensure great driver performance. They’re reacting fairly quickly to put things right, but it makes sense to check for announcements from manufacturers of any gear or software you plan to use on your new system, and wait for them to give the all clear and confirm support for Windows 10 before you take the plunge. For most of us, that will probably mean holding back on the upgrade for a few months.

If buying the OS license outright, you could still opt for Windows 8.1 and upgrade for free over the coming year. Note that you won’t be able to run both OSs side by side on the same machine on a single license, though you should be able to roll back from a Windows 10 installation to the previous version if you need to. In that sense, Windows 8.1 allows you to defer your decision while buying 10 outright does not. That said, plenty of music makers are already happily running Windows 10 systems!