Q. Can I use an effects pedal for vocals? Skip to main content

Q. Can I use an effects pedal for vocals?

I have an Electro-Harmonix Big Muff effects pedal that I’d like to try out on vocals, drums and possibly some other things during tracking. How would I go about putting this between a dynamic or condenser microphone and the mixing console? 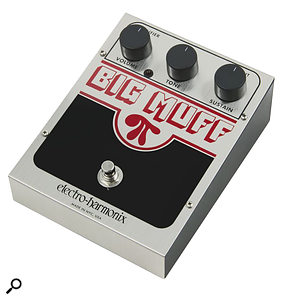 Reviews Editor Matt Houghton replies: There will be people who tell you to track clean and add this sort of effect to a vocal only while mixing — but it can be both fun and inspirational to try mangling things while tracking can’t it? Still, they have a point: the sort of fuzzy distortion a Big Muff Pi can be responsible for is not something you can undo. For that reason, it makes sense to track a clean part alongside your distorted one, and there are a few ways of doing this. If you have a small mixer (or even a large one!) you could simply mult the clean mic signal out to another track and process that. You could try patching the pedal in as an insert effect on that channel, and this will work to some extent, but there’s likely to be both a level and impedance mismatch, which means the pedal probably won’t operate quite as it would on the instrument signal for which it’s intended. Whether it’s working, though, is a subjective matter — use your ears, and if you like what you hear then great! If not, then you need some way of overcoming those problems.

Using the Big Muff as a send effect might improve things, as you can change the level going into the pedal using the mic channel’s aux send control. If that doesn’t work, what you’re looking for is a DI/re-amp box. The re-amp signal goes to the Big Muff’s input, and its output goes via the DI to a line input on your mixer or recording device. If you have no mixer, you could do pretty much the same thing, but beware of latency. You’ll need an interface with zero-latency monitoring with which the input signal can be routed straight to an output without passing through the A-D/D-A converters. The incoming mic signal is routed both to your DAW and to a physical output. That physical out goes into the Big Muff (the same level/impedance considerations apply) and the output comes back, either via a DI box to a mic input, or straight into an instrument input if your interface has one. Alternatively, you could just use the processed part in your monitor mix and ‘re-amp’ the clean signal through your pedal later, when you might have a little more control over the tone.

Finally, if you do prefer to just track the distortion effect on its own — or if you want to use it on live vocal parts — there are a couple of devices dedicated to this sort of thing. One is the Eventide Mixing Link (http://sosm.ag/eventide-mixinglink) and the other the Meris 440 (http://sosm.ag/meris-440). Each of these offers a mic preamp and an instrument-level effects loop.