Q. What are auxes, sends and returns?

Excuse the simplicity of the question, but I'm always coming across these terms in the magazine, and I don't know what they are: auxes, buses, sends and returns. Can you explain to me what are? Are they all part of the same thing or completely unrelated? 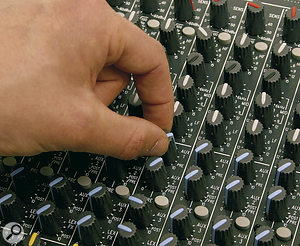 The aux sends on a mixer (whether hardware or software) allow you to send independent mixes to performers on stage or in the studio. You can also use them to feed effects processors at mixdown.

SOS contributor Mike Senior replies: All of these terms are related, in that they are all ways of talking about the routing and processing of audio signals. The word 'bus' is probably the best one to start with, because it's the most general: a bus is the term that describes any kind of audio conduit that allows a selection of different signals to be routed/processed together. You feed the desired signals to the bus, apply processing to the resulting mixed signal (if you want), and then feed the signal on to your choice of destination. If that description seems a bit vague, that's because buses are very general‑purpose.

For example, it's common in mixing situations to hear the term 'mix bus', which is usually applied to the DAW's output channel. In this case, all the sounds in your mix are feeding the bus, and it might then have some compression applied to it before the sound is routed to a master recorder or recorded directly to disk within the software. A 'drums bus', on the other hand, would tend to refer to a mixer channel that collects together all the drum‑mic signals for overall processing, routing them back to the mix bus alongside all the other instruments in the arrangement. Other buses are much simpler, such as those that can be found on a large‑scale recording mixer, feeding the inputs of the multitrack recorder, or those which carry audio to/from external processing equipment. Some don't even provide a level control.

An 'aux' is just a type of bus that you use to create 'auxiliary' mixes alongside that of the main mix bus: each mixer channel will have a level control that sets how much signal is fed to the aux bus in question. What you do with your aux buses is up to you: the most common uses are feeding a cue signal to speakers or headphones, so that performers can hear what they're doing on stage or during recording; and sending signals to effects processors during mixing. In the latter case, the aux bus that feeds the effects processor is usually referred to as a 'send', while the mixer channel that receives the effect processor's output will usually be called the 'return'. For more information, check out Paul White's 'Plug‑in Plumbing' feature back in SOS April 2002; you can find it at /sos/feb02/articles/plugins.asp.