Q. Should I use a boundary mic when playing piano live?

I play an acoustic baby grand piano and sing in a new bar. The environment fluctuates from being quiet to being 'moderately' noisy later on. There is permanent kit on top of the piano during performance (meaning, at present, that there is not the option of opening the lid). I'm ultimately not convinced that the piano is acoustically loud enough for when the room gets more noisy, but I'm more concerned about my ability to hear the piano. Due to the logistic difficulties of lack of space and inability to leave the lid open during performance, I'm thinking of getting a boundary mic to lay inside the instrument. I appreciate that this is not necessarily going to be the final word in creating a great piano sound, but at very least I'm looking to feed this signal to my monitoring, to help resolve that issue.Do you have any advice? I've never actually used a boundary mic in anger before. If it could work, it would be great if you could recommend suitable models.

SOS Editor In Chief Paul White replies: I'd definitely be inclined to try a couple of boundary mics fixed under the lid so that you can get a balance between the treble and bass strings. Pretty much any model will work adequately in what you have already recognised as a less than ideal situation, so there's no point in spending too much money. As long as you can open the lid long enough to fix the mics to the underside of the lid, using double‑sided tape or sticky fixers, you should be able to bring about an improvement. Suitable models cost from around $40 to $300 each, with the inexpensive Audio-Technica ATR9 looking like a good bet. Though this is no longer in production, it may still be available from certain retailers for under $40. Further up the price range, the Beyerdynamic Opus 51 and Beyerdynamic MPC65 would also be suitable. Also, the now discontinued AKG 542 could be a good bet, if you can find it. You will, of course, need a mixer with two spare mic inputs and phantom power to run the microphones, and you may have to experiment with the mic positioning to achieve a reasonable balance between the various strings. 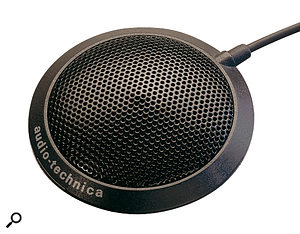 At the budget end of the boundary mic market, the Audio Technica ATR9 is a decent option. This model is no longer in production, but it should still be possible to find it on sale at a low cost. If your budget will stretch further, the rather more expensive Beyerdynamic MPC65 offers excellent quality. 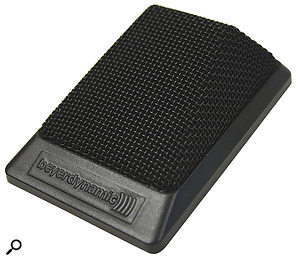 SOS Technical Editor Hugh Robjohns adds: I agree that using one or two boundary mics would be a practical solution, and with careful placement should be capable of a reasonable (if inherently very close) sound quality. Boundary mics are available across a wide price range — www.microphone‑data.com lists 34 current models to choose from — and, in my experience, even the low‑price models can deliver quite usable sound quality.

The biggest problem is likely to be mic overload; a grand piano is a powerful instrument when played enthusiastically, as you're likely to be doing in a noisy environment, so look for a model with a moderate sensitivity and a high maximum SPL. I'd also recommend choosing one with a flat frequency response: many have a heavy presence boost which will tend to make a piano sound very 'shouty'.

I second PW's suggestion of the Beyerdynamic MPC65, and I've also had good results with the MBHO 621E with a closed‑lid piano. It really does pay enormously to devote plenty of time to finding the optimum location for the mic (or mics), though, as small changes of position will result in big changes to the sound.

Once you've found the best place(s) for the mics, make sure that they're fixed really securely — but flexibly — to the underside of the lid. The last thing you need is a loud clunk half way through your performance, followed by a 'honky‑tonk on a firing range' effect as the mic falls into the strings and bounces around for the rest of the number! On the other hand, you don't want mechanical vibrations from the piano mechanisms being passed directly into the mic through the mount, either. A soft rubber base or a layer of foam helps a lot here. And be careful with the cables; I've known of mic cables being badly pinched, and even completely severed, when the lid was closed again! 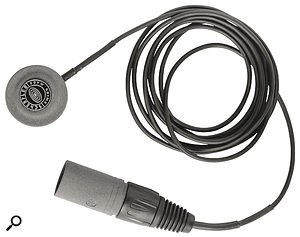 An alternative to boundary mics for use with an acoustic piano would be a contact mic, such as the Schertler DYN‑P. This might prove easier to securely affix to the piano, and would reduce the risk of the mic falling into the instrument mid‑performance, but could be a more expensive option than boundary mics.

An alternative to the boundary mic is the contact mic, which gives stunning separation and may be easier to fit in your case. Again, some experimentation will be necessary to find the best location(s), but I've been really impressed with the quality obtained using Schertler DYN‑P (and DYN‑GP) pickups. Not cheap, but worth it in situations where isolation is the priority. The pickups are fitted to the underside of the soundboard using a 'blu‑tak'‑like putty, which is usually very reliable and might be a lot easier to install than boundary mics inside the lid, in your situation.