Q. What equipment is suitable for my 'sound installation'? Skip to main content

Q. What equipment is suitable for my 'sound installation'?

I'm planning to write a piece of music for a sound installation using Logic Pro. There would be 10 tracks, which I'm hoping to route from an audio interface such as a MOTU 828 to 10 different active speakers, so that there would be one speaker for each track of the piece. I'm quite new to music technology, so I'd appreciate it if you could explain some things to me. Firstly, would this setup actually work? Secondly, is a MOTU 828 a good device to use or would something else be better? Also, what leads do I need, what active speakers would you recommend for use outdoors, and how should I protect the speakers and other equipment from getting wet, without compromising the sound?

I have around £1500 to spend on speakers, audio interface and leads, and I would really appreciate your help. 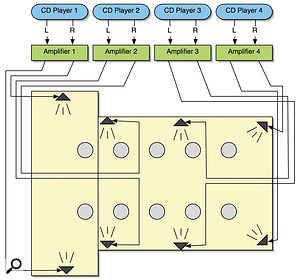 This system diagram shows the plan of an eight-channel sound installation in a fairly large church. Each of the four CD players was sending a split-mono signal to dedicated amplifiers, which were connected via two-core mains cable to speakers around the building. The result was, well, spacious! News Editor Chris Mayes-Wright replies: In response to your first question, the answer is yes, it will work; in fact, I've done a number of similar projects myself. The MOTU 828 that you mention would indeed be a suitable device, but it only has eight analogue outputs. Analogue outputs are the kind that you can connect directly to the line inputs on the back of an active speaker. So, basically, if you used the MOTU 828 on its own (without additional equipment), you would only be able to feed eight different signals to eight different speakers. If doing this, you should use quarter-inch balanced jacks to connect between the back of the MOTU 828 and the inputs to your active speakers.

If you really need 10 channels, you can use the MOTU 828's stereo S/PDIF output: this is a digital audio connection that needs converting to analogue before it can be plugged into the back of a speaker. You can buy digital-to-analogue (D-A) converters from most music technology equipment retailers, such as the ones that advertise in these pages, but they can be quite expensive. With your budget, I'd suggest aiming at the lower end of the market. Behringer manufacture a product called the Ultramatch Pro SRC2496, which has D-A functionality, as well as some other features. It costs £109 including VAT, so it shouldn't take up too much of your budget, but if you can make do with just eight speakers, I would suggest using the MOTU interface on its own.

You mentioned that you'd like to use active speakers. When I've done installations in the past, I've found that using passive speakers with separate power amplifiers was far easier (and safer). I'm a big fan of the JBL Control 1 speakers (they cost under £100 for a pair and are really rugged), which seem to work well with Samson Servo 170 amplifiers, although these seem to have been superseded by the Servo 200 model, which costs around £100.

The reason I suggest passive speakers coupled with amps is that if you are using active speakers and they're spread out over a wide space, you will need to distribute power to each of them, which is not a good idea over distance, especially outdoors. I would only suggest active speakers if you can guarantee that there will be a power socket next to each one.

If you use passive speakers powered with amplifiers, you can keep all the amplifiers (and therefore power) in one place, then run long lengths of speaker cable to each one. Mains electricity cable works well to carry the signal between the amplifier and speaker, as its per-metre cost is cheaper than 'proper' speaker cable, and it's tough enough to withstand a bit of trampling in grass or on concrete.

Remember that you only need one stereo amplifier for every two speakers, because a stereo amplifier has two separate inputs and outputs. As long as you feed a dual mono signal into the amp, you will get the necessary separation at the speakers.

You also mention that you are planning on running all of this from a laptop. If so, bear in mind the security aspect; it's probably not wise to leave a laptop unattended at a public event. Also, the fact that the audio would be running from a hard drive (which is not the most stable of media) may be a concern.

If these things worry you, and you're not too bothered about the sync of the material being ultra-tight, I would suggest using a bank of CD players; these can be located near the amplifiers to help keep the power supply in one place. I have used CD players for exactly this purpose in the past, and it is by far the easiest and most reliable way to play out sound for a long period of time.

Again, as with the amplifiers, you only need one stereo CD player for each two channels of your sound installation. But you'll need to bounce five stereo mixes (or four, if you're only using eight speakers) from Logic, then burn them onto CD. Previously, I've used the Tascam CD160, but any CD player with line outputs (usually red and white phono sockets) would be fine. The cabling for connecting the CD players to the amplifiers can be done using phono-to-jack connectors.

I found the Tascam player to be particularly good at this job: it can be rackmounted, it's pretty robust, and if you have a stack of them the infra-red remote control can be used to start them off simultaneously, to achieve a reasonably good sync between them! Of course, you could get a few of your friends to press the play buttons at the same time, but this approach is a little rudimentary.

As for your concerns about the weather, the most important thing is to run everything through a safety breaker circuit, so if you get a problem the power instantly cuts and everything is made safe.

To prevent the rain getting to your speakers, you can cover them with plastic refuse sacks. Also, make sure all electrical contacts are insulated with electrical tape, and if you are using a stack of power amps, ensure that these are well covered, while keeping vents, which require a constant airflow around them, clear. Make sure you lift the equipment off the ground, too (perhaps on a table or wooden pallet), and erect some kind of cover, such as a garden gazebo or large patio umbrella, over it all. Good luck!