Q. What factors affect the quality of a microphone capsule?

I am curious to know more about the design and construction of capacitor mic capsules. For example, what is it about the capsule or the way it is mounted that dictates the polar pattern of the mic? If the capsule is sturdy and made from good-quality parts, what other factors come into play which affect its sound quality? Do capsule designs really differ that much from mic to mic?

Besides the capsule itself, the design and construction of the mic body and internal electronics also shape the sound of the mic.

Technical Editor Hugh Robjohns replies: A capacitor mic capsule is an extremely complex thing, and the very best are expensive and time-consuming to make.

There are two basic types of capsule, working according to two different principles — pressure-operated and velocity-operated (also known as pressure-gradient). The former is constructed a bit like a snare drum — the capsule is, in essence, a sealed box with a diaphragm stretched across one side. The diaphragm acts like a pressure sensor, comparing the pressure changes caused by passing sound waves with the static internal pressure inside the box. The result is an omni-directional polar response —the direction of the sound waves don't matter, the diaphragm is only sensitive to the fact that they pass by.

The other way of doing things is to suspend the diaphragm in free space so that sound waves can get to both sides. In this case, the diaphragm moves (hence 'velocity') as a result of the pressure difference (pressure gradient) between the two sides. This arrangement gives a figure-of-eight response — the capsule is sensitive to sounds from front and back, but insensitive to sounds from the sides.

Often, it is more useful to have a mic that is sensitive to frontal sounds but rejects rearward ones — the familiar cardioid polar pattern. A cardioid pickup pattern is produced by combining equal proportions of pressure operation and pressure-gradient operation, and the earliest cardioid mics actually did have both an omni and figure-of-eight capsule side by side in the same box, with their outputs summed together before reaching the output terminals. 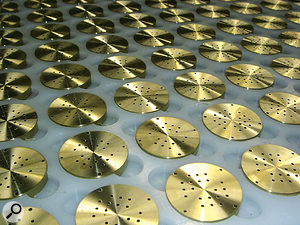 As Paul White discovered when he visited the Rode Microphones factory (see SOS August 2005), the utmost precision is required for drilling holes in a cardioid mic's backplate.

These days, most cardioids are 'phase shift' or 'labyrinth' designs which are constructed with a single diaphragm, like a pressure-operated mic (the snare drum), but with special convoluted passageways in the rear plate which allow sound to find its way through to the inside of the diaphragm after a time delay. The way this works is rather less obvious than the two prime capsule designs, and would take more space to explain than I have available here, but you can learn more about the subject by reading this article from SOS September 2000: www.soundonsound.com/sos/sep00/articles/direction.htm.

In terms of construction, there are literally dozens of different parameters to consider. There's the material the diaphragm is made from and its shape, thickness and tension, there's the spacing between the diaphragm and the back plate, the damping arrangement, the isolation dielectrics, the polarising voltage and so on and so on.

In the case of a cardioid capsule, there is also the complex arrangement of the rear chamber labyrinth to consider, and how that affects the polar pattern and the linearity of the capsule's off-axis frequency response. Entire books have been written on this subject alone!

Then, once the capsule has been designed and built, it has to be mounted in a mic body, the size and shape of which (along with the grille) affects the response of the capsule. And then there is the impedance converter circuitry, the powering circuitry and the output circuitry to consider, all of which affect the sound of the mic further.

This is why it is relatively easy for manufacturers in the Far East to reverse-engineer established mics and build copies very cheaply. But it is extremely hard for them to design new models from the ground up because the real science involved is known by a relatively small group of people.