Q. What makes some interfaces more expensive than others? Skip to main content

Q. What makes some interfaces more expensive than others?

When it comes to computer audio interfaces, what is it that we are really paying for and how does the price relate to the quality of the A-D/D-A converters? Devices like the MOTU Traveler and the RME Fireface 800 cost more than, for example, the Focusrite Saffire or Digidesign M Box 2, so what does the extra money get you? When I look at the A-D/D-A specifications (sample rate, dynamic range and so on) of interfaces which differ quite a lot in price, they often seem very similar. So do more expensive units sound better? 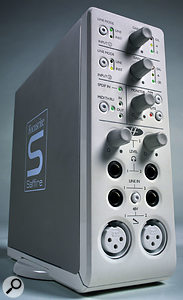 PC music specialist Martin Walker replies: When it comes to audio quality, there's a lot more to computer audio interfaces than the choice of A-D/D-A converters — having a low-jitter clock is vital if the sound is to remain 'focused', and the design of the analogue support circuitry (the input preamps and output stages) also modifies the final sound to a lesser extent, including the choice of op-amps, some of the capacitors, the power-regulator design... the list goes on!

Many manufacturers start the design of a new audio interface by establishing a rough feature list along with a likely price point, and then the engineers have a complex juggling act to perform to meet this brief. Entering the equation are the quality and price of the converters, the quality of the analogue circuitry (particularly the mic preamps, if there are any), the quality of digital circuitry, plus the controls, connectors, casework and so on. However, when it comes to the converters, many companies tend to choose exactly the same components from one of a handful of manufacturers like AKM Semiconductor, Cirrus Logic and Burr Brown.

The converters may only end up contributing a tiny part of the overall build cost, but their specifications often become an important part of the marketing process, particularly when new features like 192kHz support are available (though in the real world I still regard this as a red herring for most recording musicians). Some audio interface manufacturers also quote specifications for the converter chip alone, which can be misleading, since once all the support circuitry is added this inevitably compromises overall performance to some extent. Others quote real-world performance for the entire interface, which is far more helpful.

The Focusrite Saffire and the MOTU Traveler are both 24-bit/192kHz Firewire interfaces, so why does one cost twice as much as the other?

With many audio interfaces you are predominantly paying for the array of features on offer, so an eight-in/eight-out interface will cost a lot more than a stereo one simply because there's nearly four times as much circuitry, socketry and controls. You will also pay more for additional features such as mic preamps, built-in limiting, word clock I/O and so on, which is why I always stress the importance of choosing the interface that best suits your needs. A £1000 interface with loads of features may not benefit you if you really only need one with basic stereo in/out capability that could give you similar audio quality for half the price or less. On the other hand, if two interfaces with similar features and I/O are at wildly different prices, the more expensive one is almost bound to offer better audio quality, although whether or not you'll really benefit from it depends to some extent on the rest of your gear.