Q. What happens when audio is converted from AIFF format to AAC and back again? Skip to main content

Q. What happens when audio is converted from AIFF format to AAC and back again?

I understand that data-compressing audio files is really just chopping out frequencies we think we don't need, but I don't understand what encoders do to go the other way — converting an AAC file to an AIFF, for example. I say this because I've found that an AIFF ripped straight off a CD on my iTunes sounds pretty close to an AIFF that used to be an AAC. Both AIFFs sound better on my classic hi-fi system than the AAC — but the AIFFs don't quite sound the same as each other either... But it's hard to know if I'm hearing a difference or imagining it! So, can you tell me what the difference is between a first-generation AIFF (the original 'rip' from CD) and a second-generation AIFF (first-generation converted to AAC, and that AAC converted back to AIFF)? 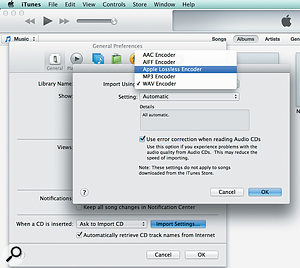 Loss-less audio data compression options, such as FLAC or ALAC (as being selected here in iTunes), may not reduce the file size as much as lossy codecs like MP3 or AAC — but neither do they sacrifice any actual audio data, and so the quality remains every bit as good as the CD, WAV or AIFF original from which the compressed file is created.SOS Technical Editor Hugh Robjohns replies: The first AIFF is, in theory, a bit-accurate copy of the CD audio and should sound identical to the CD. In practice, the accuracy of the rip depends on the cleanliness and quality of the CD itself, and the capability of the disc player and ripping software. The second AIFF is a 'capture' of the output from the AAC file decoder. There is no 'up-conversion' as such: lossy data codecs such as AAC throw information away and it can't be retrieved.

Here's a crude analogy. If the original CD were an arty photograph hanging in a gallery, the equivalent of your first AIFF would be a direct reprint of that picture taken from the same negative. The image is identical in every way. The equivalent of the AAC file would be a photo, taken in the gallery of the original on the wall, using a high-quality large-format camera. The resulting negative would then be blown up and printed to the same size as the original, but with the printer deliberately punching hundreds of small holes in the paper, so it wasn't quite so heavy. From a distance, the image would appear the same as the original, but closer inspection would reveal that many small parts of the image were physically missing. Your second AIFF is the equivalent of another high-quality photo, but this time of the hole-infested image. The resulting negative is enlarged and printed somewhere else — but with a better printer that doesn't punch holes in it. Again, the image will look, from a distance, like the original, but when you get closer you can see that the image has captured all the holes on the AAC version — because even though the holes aren't physically in the new print, the actual image data is still missing.

Lossy data-reduction identifies and throws out specific narrow frequency components, and the frequencies it chooses to discard change moment by moment, depending on what the codec's model of human hearing says we can't hear. This, in concert with other tricks, results in a data stream which is much smaller than that of conventional PCM audio. The AAC decoder receives the data stream and untangles it, rebuilding the audio output as far as it can, but there are still missing frequencies and other artifacts. So, returning to your listening experiences, the second AIFF and AAC file should sound identical to each other, and both should be degraded slightly in comparison with the first AIFF and the CD. Audio data was lost when the AAC file was created and it stays lost: there's no 'up-conversion' process from AAC to AIFF, only a format change.

If you're hearing something different then you are either suffering from 'confirmation bias' (where your brain is overriding your ears) or there's something odd going on with the file handling and format conversion in the computer: playing an AIFF is straightforward, but playing an AAC file requires active decoding, and those different processes can contaminate the audio output in subtle but audible ways, most usually by inducing data jitter.

There's no problem in storing AAC files for hi-fi listening if you accept the slightly reduced quality (and, to be fair, high-rate AAC is pretty good). If you want exactly the same quality as the original CD, though, you must rip the CD directly to an uncompressed PCM format (AIFF or WAV), or to a compressed file that's created using a 'lossless' codec. Lossless codecs such as FLAC or Apple Lossless (ALAC) remove 'redundancy' rather than 'irrelevancy' and work a bit like the ZIP and RAR formats for compressing computer files. They're not as efficient at space saving as AAC — typically only halving the file size, rather than quartering it (or more) — but on replay the audio is rebuilt completely as a bit-accurate output that's identical to the original CD. I use ALAC in iTunes to store my ripped CDs for this very reason.