Q. Will my mic preamp work with my Shure SM7B microphone? Skip to main content

Q. Will my mic preamp work with my Shure SM7B microphone?

I have a Focusrite Trackmaster mic preamp, and I'd like to know if it will work properly with my Shure SM7B dynamic mic? I've heard that SM7s require lots of gain and I'm not sure if the Trackmaster is up to the job.

SOS Technical Editor Hugh Robjohns replies: "The short answer is "yes”, but the longer answer involves some sums. The idea that the Shure SM7B needs lots of gain comes from its relatively low sensitivity. The published specifications state that it generates an output voltage of 1.12mV when detecting an acoustic air pressure of 1 Pascal. For reference, 1 Pascal is a sound pressure level of 94dB SPL, and that's roughly the sound level of normal speech at about 1cm from the mouth. So, if you speak normally into an SM7B mic with your lips on the foam, you'll get 1.12mV out of it, which equates to a signal level of about -57dBu. 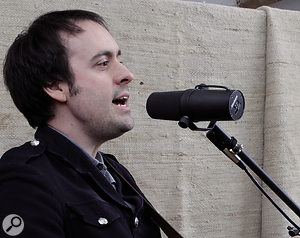 The Shure SM7 receives many plaudits, but how much gain does your preamp need to deliver to make it work?Now, the Focusrite Trackmaster has a maximum of 60dB of gain available from its mic preamp, so with the mic gain wound fully up that -57dBu input signal is raised to +3dBu at the analogue output. That's fractionally below standard line level — 0VU on an analogue meter.

Of course, we normally want to record into a DAW with a digital signal, and according to the published specs the internal A-D converter in the Trackmaster clips (reaches 0dBFS) at +22dBu. That's 19dB higher than our mic signal, so our normal speech into the SM7B would peak at about -19dBFS on the computer's digital meters. That's actually a perfectly workable level, but it's roughly 10dB lower than the ideal peak level when tracking. Fortunately, another 30dB of extra gain is available in the Trackmaster from the compressor's make-up gain control, should you need it.

Note though, that people normally sing much louder than they speak. In fact, levels in excess of 130dB SPL have been detected from professional rock singers! Working the maths again, with the Trackmaster mic gain flat out you'll only need 113dB SPL at the business end of an SM7B to clip the converters, and only 103dB SPL to reach the ideal -10dBFS peak level for tracking. That is easily achievable, even by novice singers.

So, yes: the Trackmaster will cope with the output from the SM7B when tracking vocals without any practical problems at all — but you should expect to work with the mic gain close to the maximum setting.