Q. What microphone should I use for single-mic recording? Skip to main content

Q. What microphone should I use for single-mic recording?

I am looking for one big bluegrass microphone! I would like to purchase a high-quality one for recording my band. Can you give me some brand names to investigate and where I can order one?

News Editor David Greeves replies: The traditional way of recording a bluegrass group, and, if you go back far enough, just about any kind of group, is to use one microphone. The musicians simply arrange themselves around the mic at appropriate distances to achieve the correct level balance between the instruments. If a particular instrument needs to be highlighted, during a solo for example, the musician can move closer to the mic and then back again.

You'll still find this technique used in professional studios today, but even in the staunchly traditional world of country music, more modern techniques are far more common. When we spoke to renowned bluegrass recording engineer Bill VornDick as part of our feature on Nashville production techniques in SOS October 2002, he explained that his usual approach was to use a stereo pair on each instrument. A closer comparison to what you're aiming to do can be found in our interview with the band Aberfeldy and their producer Jim Sutherland, which appeared in SOS September 2004 (www.soundonsound.com/ sos/sep04/articles/aberfeldy.htm). They recorded the band's debut album Young Forever using just one microphone. Though it's not a bluegrass record, it's a good example of how liberating recording with one mic can be, though it throws up a whole new set of challenges for both the engineer and the performers. 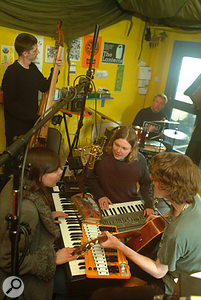 You'll get the best results using a condenser mic with an omnidirectional pickup pattern and preferably a fairly flat and even frequency response. This could be a large- or small-diaphragm mic. Though a large-diaphragm mic might intuitively seem most appropriate, small-diaphragm omnidirectional mics typically exhibit a more linear (that is to say, less coloured) off-axis frequency response, and this could be to your advantage if you have a lot of musicians to position around the mic! That's not to say that you won't be able to acheive excellent results with a large-diaphragm mic, but smaller capsules (when properly engineered, of course) can get closer to the unachievable ideal of a truly omnidirectional pickup pattern — equal sensitivity to sound from all directions at all frequencies.

In terms of large-diaphragm omnidirectional mics, there are lots out there to choose from, ranging from affordable offerings from the likes of Rode, SE Electronics, Red5 and Sontronics to premium products from famous names like Neumann, Microtech Gefell, Beyerdynamic and AKG. Many are dual-diaphragm, multi-pattern mics which offer an omni mode. Dedicated omni mics have a single diaphragm, mounted across a sealed box, a bit like a snare drum. Earthworks and DPA are two notable manufacturers of very high-quality small-diaphragm omni mics.

If you do intend to part with a sizeable amount of money, find a friendly and reputable dealer. Once they see you're serious they should be more than willing to let you try out a few different mics until you find one that suits you. Some manufacturers — SE Electronics for one — offer direct trial/loan schemes too. It's also worth considering after-sales service — if you're going to spend a lot of money on a mic, make sure you're covered in the event of it developing a fault.

Before we get too carried away with the mic, it's important to consider the rest of the signal chain — there's no point blowing your entire budget on an exceptional microphone if it's going to be let down by other equipment that doesn't meet the same high standards. So consider what sort of preamp and A-D converter or soundcard you plan to use and factor this into your budget. Buying a mid-level mic and upgrading the rest of your equipment will lead to a better end product than spending all your money on a high-end mic alone.

Likewise, don't underestimate the importance of the role played by the room you'll be making the recording in. When using multiple directional mics to record a group it's usually possible to limit the amount of reflected sound picked up, but this isn't an option with an omni — as well as your performers, an omnidirectional mic will pick up a lot of room sound. Acoustically treating a whole room can be a tricky and expensive business. Since you're taking a traditional approach, perhaps you'd be best off finding a good-sized room or hall with a naturally pleasing, but not overpoweringly reverberant, sound.

Of course, this single omnidirectional mic approach will result in an inherently mono recording. If stereo is required, then a coincident or back-to-back pair of cardioid or sub-cardioid mics might be a better bet.