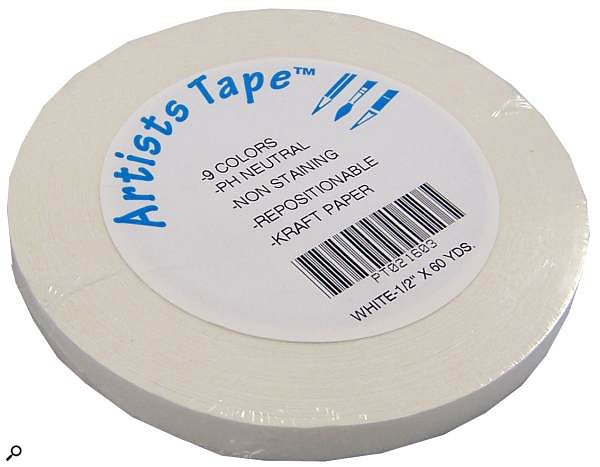 Artist tape is designed to leave no residue and not to yellow —a much better choice for labelling up your console than typical decorators' masking tape!

What is the best tape to use for sticking to mixers and writing down what each channel is being used for? I currently own a Tascam DP‑32SD Portastudio and like to have a strip of tape below the faders for each song I'm working on, with the key of the song, tempo and what's on each track (kick, snare, etc). I then keep these on a strip of plastic and have my own non-DAW recall system!

Currently, I use ordinary masking tape, but once it's stuck on it goes a bit dark, and even with black pen it can be hard to read the writing. I thought about white electrical tape but assume it's going to be hard to write on with a normal pen. I also want to make sure that it doesn't leave a sticky mess when removed as well. Do you have any recommendations?

SOS Technical Editor Hugh Robjohns replies: The simple answer is to buy a roll of Hosa LBL‑505, also known as 'Scribble Strip Console Tape', which is available from most audio equipment/accessory retailers. In essence, this is a white paper-based tape — which means it's easy to write on with any normal pen — and it tears easily and peels off the console in one piece, without leaving any residue regardless of how long it's been in place. The downside is that it is quite expensive! It's available for around £17$23 including tax for a 0.75‑inch by 60‑yard reel. That said, there are cheaper alternatives such as the slightly narrower (half-inch) JVCC ART-11 tape, which costs closer to £10$13.50 for the same length reel. This kind of tape is often sold as 'artist tape' or 'drafting tape' in stationery outlets, and comes in a variety of widths, lengths and colours, so it might be worth searching on those terms for bargains.

A lot of people just use ordinary electrical insulation tape for the purpose and seem to be quite happy with it, but I'm really not a fan and wouldn't recommend it. The biggest issue with insulating tape is that it tends to ooze a sticky residue to the sides of the tape, as well as leaving glue on the surface when removed. Yes, it can be cleaned off with isopropyl alcohol, but that may also damage the paint surface in some cases and should be used very cautiously — and it adds to the overall cost too. Apparently, the matte versions of insulating tape tend to leave less sticky residue when removed, and are both easier to write on and less likely to smudge than the glossy versions. The other thing to bear in mind is that insulating tape is often difficult to tear; it tends to stretch rather than break cleanly.

The other option is decorator's masking tape, but again it's not something I'd recommend. There are several different types, but I've found they all tend to become increasingly difficult to remove the longer they're left in place, and can leave nasty marks and residues — so I will stick with and continue to recommend artist tape, which doesn't have any of those problems!