Q. Which amp should I buy to use with some Mixcubes?

A mate is moving abroad and selling lots of his studio, which is good for me as I'm about to buy his pair of Avantone Mixcubes off him! But, unfortunately, he's taking his amp with him.I only have $200 to spend on another one. What's best? The only reference monitor amp I can find in this range is the Samson Servo 120, but I'd like to have some more choice. Do you have any other good suggestions for something suitable I could buy without spending much more money? I was thinking perhaps a hi-fi amp, such as one of the cheaper Cambridge Audio amps, like the Cambridge Audio Topaz AM1? 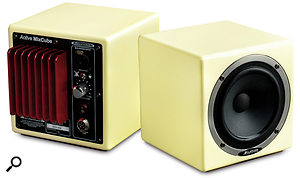 The Avantone Mixcubes are great secondary monitors, but you'll need an amp to go with them! Something like a second-hand Rotel RA 612 should do the job for very little outlay.Via SOS web site

SOS Reviews Editor Matt Houghton relpies: These aren't exactly intended to be your primary reference monitors, so an old hi-fi amp should be fine. I use a second-hand Rotel RA 612 for a similar job and that set me back about $70. Alternatively, a Cambridge Audio amp (seeing as you mention them) would also be fine if you want something that looks a little newer. Personally, while I see the value of Auratones, Avantones and similar secondary monitors, I don't see why anyone would want two of these speakers when one would do the job just fine.