Q. Which room should I record in? Skip to main content

Q. Which room should I record in?

I am about to do a recording at a farm in the North York Moors. It will be done 'live', using two acoustic guitars and two voices, and we will add bits of percussion, mandolin and accordion afterwards. The site has a choice of buildings to set up in (using my own equipment). Should I choose the huge, high‑ceilinged barn or the small, cosy stable? 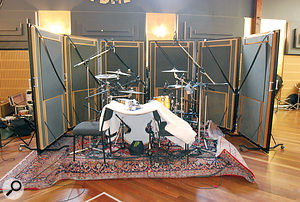 With a choice of large recording spaces to work in, acoustic screens can be very useful for tailoring the room characteristics to suit your players.

SOS contributor Martin Walker replies: It's really difficult to generalise about the acoustics of a room without seeing it personally. The small, cosy stable might provide a more intimate acoustic that works well with your small acoustic ensemble, especially if it includes lots of wooden stalls that result in lots of pleasing diffused reflections. On the other hand, it might sound really nasty, depending on its dimensions and whether it's built of rough stone or breeze blocks. In general, smaller rooms can tend to sound more 'boxy'.

A larger space with good dimensions can exhibit a flatter response down to a lower frequency, and hence better acoustics, and it may give you a richer and grander reverberation whose amount you could alter by how close you place the mics to the performers. A larger space also provides you with more opportunities to place several mics at different distances from the performers; close ones capturing the intimacy of the performance, and more distant ones capturing the ambience of the space, recorded on to additional audio tracks that can be later mixed in to taste. However, this doesn't necessarily mean that your particular barn will sound good, especially if you end up with several discrete reflections coming back off plain, unadorned walls and a concrete floor.

Ultimately, you really do have to use your ears. Don't worry if you don't have sufficient experience to judge room acoustics immediately on entering the space. Just set up one of the performers (with an acoustic guitar, for instance), put on some high‑quality, closed‑back headphones and move both performer and mic about while you monitor their performance. While this will be vital in helping you find the optimum mic position to record each instrument and voice, it will also tell you a lot about the room acoustics (probably a lot more than clapping a couple of times, as so many people do).

Acoustic guitars often benefit from a 'live' sound, so you may find it beneficial to place the performers near some reflective surfaces such as doors, a hard floor, or those stable stalls. You may also find that using a couple of mics on each instrument works well, such as one below the bridge and another near the neck of the guitars. You can find lots more useful advice on mic positions and distances for recording acoustic guitar in SOS August 2001 (/sos/aug01/articles/recacgtr0801.asp).

If the room sound proves to be poor, it's handy to have a few movable acoustic screens (or even improvise some with clothes horses and duvets) to add some extra absorption close to the performers. Such screens can also be used to increase acoustic separation between the players. However, I suspect that your safest option is not to restrict yourself to the stable or barn. Since you're recording at a farm, see if other rooms in the farmhouse itself could be used. Many excellent acoustic ensemble recordings have emerged from such cosy environments, which normally contain enough furniture to provide plenty of absorption and diffusion. Starting with a room that sounds good is always easier than attempting to knock a poor one into shape.