Q. Why Are Some A-B Stereo Arrays Angled Outwards?

Can you offer any guidance on what’s essentially an A‑B stereo array, but with the mics angled slightly outwards? I ask because I’ve seen it used a lot in sessions by the BBC, Abbey Road etc, but it’s not one of the ‘official’ stereo arrays (A‑B, X‑Y, NOS, DIN, ORTF etc). 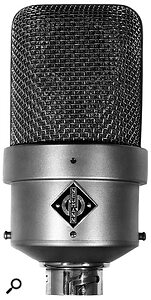 The Neumann M50, the ‘omni’ mic traditionally used in the Decca Tree, partly because of its increased directionality at high frequencies.SOS Technical Editor Hugh Robjohns replies: The NOS, DIN and ORTF all use cardioid mics exclusively, and the X‑Y format uses any directional pattern mic. So none of those formats are really valid comparators for the A‑B or ‘spaced omni’ array. Moreover, there’s no ‘standard’ spacing/angle for A‑B arrays; not even the famous Decca Tree arrangement has a single specified set of dimensions!

Spaced mic arrays theoretically capture only inter‑channel time/phase differences and, in general, increasing the spacing between capsules increases the time differences, and thus decreases the stereo recording angle. Of course, few omni mics are perfectly omnidirectional at all frequencies; most become more directional at higher frequencies. So the reason for angling the mics outwards is to take advantage of that modest HF directionality by using it to introduce some inter‑channel amplitude differences at higher frequencies. The combination of this and the inter‑channel time differences generated by the physical spacing of thee mics enhances the impression of stereo width and improves the imaging accuracy.

So the reason for angling the mics outwards is to take advantage of that modest HF directionality by using it to introduce some inter‑channel amplitude differences at higher frequencies.

Many recording engineers fit ‘acoustic pressure equalisers’ (APEs, or ‘spheres’) to their omni mics to increase the natural HF directionality even further. In fact, the capsule in Neumann’s classic M50 ‘omni mic’ is integrated into a 40mm sphere and thus has noticeable HF directionality, which is why the outriggers on a Decca Tree (which, traditionally, employs a trio of M50s) are pointed outwards.