Q. Why aren’t my vocals audible in the car? Skip to main content

Q. Why aren’t my vocals audible in the car?

I've used a 'stereo-izer'/widener on a track, along with two more separately taken tracks panned far left and right, respectively. There are three tracks in total for the chorus of the track.

When the vocals play on the chorus, it's barely audible, but only when I play the track in the car. There may be a difference on my iPod or my monitors, or my cinema system. But the difference in the car is very dramatic.

I can only guess that the separate audio tracks are cancelling each other out. (I've read something about phasing, I think). But why is the effect so pronounced in the car?

SOS Technical Editor Hugh Robjohns replies: Without knowing exactly what the source tracks are and what you've done, it's hard to give a precise answer, but it does sound as though there is some serious cancellation going on between channels, and that also implies that the two channels are being summed to mono at some point in the car.

Firstly, that stereo-widening effect you mentioned will inherently reduce the mono compatibility and may well lead to significant sound-quality changes between listening in mono and listening in stereo. Secondly, if you have two near-identical signals, and one has an inverted polarity with respect to the other, adding them together will result in them trying to cancel each other out, leaving nothing behind at all. But for that to happen you (a) need to have opposite polarity signals, and (b) need to add them together (either electrically or acoustically).

From your descriptions, you can hear a hint of the effect on your other systems, but it is very pronounced in the car. What that suggests to me is that there is some out-of-phase aspect to the signals — probably caused by the stereo widener effect — but that your other systems aren't summing the left and right channels together, so the full cancellation isn't happening. However, in your car it would appear that the channels are being summed together somehow, and hence near total cancellation. Exactly how that is happening, I can't say. It could be that your speakers are wired in a peculiar way, or that there is some odd signal processing (surround effects?) happening in your car hi-fi. 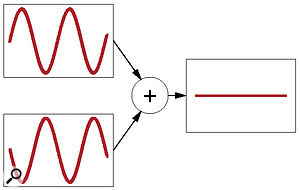 If you have two almost-identical signals, and one is polarity inverted in respect to the other, adding them together will result in phase cancellation. This could be causing our reader's vocal track audibility problems.

The only way to get to the bottom of this is to analyse the source material carefully for phase anomalies, and use some known reference material to evaluate exactly what is going on in your car.