Q. Why choose a condenser mic? Skip to main content

Q. Why choose a condenser mic? 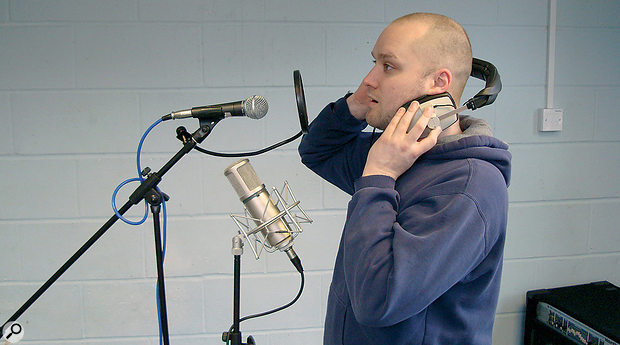 Dynamic mics and capacitor mics use different approaches to convert sound waves to electrical signals. But while the capacitor mic is usually considered superior technically, it’s not necessarily always the best choice.

Why do people recommend a condenser microphone over a dynamic? I know it’s an idiot question, but I’m new to this!

SOS Technical Editor Hugh Robjohns replies: It’s not really an ‘idiot question’ — I can understand why it can seem confusing. But understanding the nuances requires a knowledge of some microphone basics.

Almost all mics employ a physical diaphragm to sense the minuscule changes in air pressure/velocity that carry sound waves. The lighter the diaphragm, the more sensitive it can be — the less sound energy that’s required to get it moving — and the easier it can change directions when moving. So the lighter the diaphragm, the better the mic’s high-frequency and transient responses.

In a moving-coil mic — which I think you mean by ‘dynamic’ — the diaphragm has a great lump of metal glued on to its back, in the form of many coils of copper (or aluminium) wire which pass over a magnet. Long ago, one Michael Faraday explained how a wire conductor moving through a magnetic field generates a current, and this is how moving-coil mics create an electrical output with a waveform that’s analogous to the sound waves. All that metalwork glued to the diaphragm inherently makes it heavy, though, which increases its inertia and results in insensitivity — and a limited high-frequency extension and relatively poor transient response. But that’s not necessarily a bad thing...

For example, a lot of recording engineers prefer to use moving-coil mics when close-miking drums, because their limited transient response acts almost like a compressor, ignoring the fastest transients and delivering a denser and better-controlled sound, without the transient peakiness that a capacitor mic would provide. Much the same is true when recording a heavily strummed acoustic guitar part, and it can help with some vocal styles too.

It should also be remembered that these are broad generalisations — there are some very high-quality moving-coil mics that produce an almost capacitor mic-like frequency response. There’s also another form of ‘dynamic mic’ (a mic that works on the electro-magnetic principle) capable of superb results: the ribbon mic still generates its electrical output by moving a conductor through a magnetic field, but the conductor is the diaphragm itself, usually a very thin strip of aluminium foil. This foil has very low mass, so inertia isn’t a problem, and the frequency and transient responses are greatly improved too. Sensitivity would be too, except that with only one pass of the conductor within the magnetic field (there are many possible conductor passes in a coil), the generated current is very small, and the output correspondingly low. A lot of gain is needed to raise the signal to something usable, which means that electronic noise can be more of an issue.

Those are some of the key characteristics of dynamic mics, so what about the capacitor (or condenser) mic? This (in all its forms) works on an electro-static principle, in which a metalised diaphragm forms one plate of a ‘capacitor’. In case you don’t already know, a capacitor comprises two conductive plates arranged parallel to each other and separated by a ‘dielectric’ medium (which could simply be air). It basically stores electric charge, and there is a known relationship between the stored charge (Q), the distance between the plates (which defines the capacitance, C), and the voltage (V) that can be maintained across the capacitor: Q=CV. If the back-plate is fixed and the front plate is the diaphragm, any movements of the diaphragm in response to sound waves alters the capacitance, and if the amount of stored charge is held constant then the voltage across the capacitor varies in direct proportion to the wanted sound.

The usual configuration is called a ‘DC-biased capacitor microphone’, in which the charge stored within capacitor capsule is maintained by an externally generated voltage (typically around 60V) applied across the two capacitor plates via a very large resistor. Changes in the capacitance are detected as a varying voltage across the capacitor by an impedance-conversion circuit (usually employing a valve or FET) which translates that into a stronger signal that can be passed to the output. The 'impedance conversion' circuit is critical as it maintains a very high impedance around the capsule to stop the stored charge leaking away, while presenting a very low source impedance to the output cable so that the signal can be passed on to a microphone preamplifier without losses.

Like the ribbon mic, there’s nothing attached to the capacitor capsule diaphragm, so it’s very light and has excellent frequency and transient responses. It’s also very sensitive to low-level sounds, and it generates a relatively high output, so doesn’t need anything like as much electronic gain as a typical dynamic microphone.

Consequently, capacitor mic technology is in most respects considered to be technically superior to all other forms — it certainly provides the best technical specifications and greatest precision as an electro-acoustic transducer. That’s why capacitor mics are so routinely recommended as ‘the best studio mic’. However, technically best isn’t necessarily the same as the most appropriate, either practically or artistically!

For completeness, I should also mention that there are a couple of other ways of making capacitor mics. Perhaps the most common is the ‘electret mic’ which basically works in the same way as the DC-biased capacitor capsule described above, except that the stored charge doesn’t come from an external voltage source. Instead, it comes from a pre-charged dielectric material which is physically attached to the back-plate inside the mic capsule, and that holds a fixed static electric charge inside the capacitor at all times. (This charge can leak away slowly over time, but that’s typically many decades with modern designs).

A radically different approach is the RF-capacitor mic, in which the capacitive mic capsule is used as the tuning element in a radio-frequency oscillator. This technology was exclusive to Sennheiser (marketed as the MKH range), but Rode now offer a very similar design in one of their NTG models. In this ingenious system, passing sound waves cause the capsule capacitance to vary, and that in turn causes the RF oscillator frequency (which is nominally around 8MHz) to vary in the same way. So in effect the microphone behaves like a simple FM radio station! However, instead of broadcasting this varying RF signal, it is passed directly to a demodulator circuit inside the microphone and converted back to an audio output signal.

Although electronically complicated, there are several technical advantages to this approach, of which the most important is that the capacitor mic capsule works in a very low-impedance environment (as opposed to the very high-impedance environment of DC-biased and electret capacitor capsules). The significance of that is that it makes the capsule immune to condensation and humidity changes, which can affect conventional capacitor mics very badly, causing the charge to leak away and resulting in very nasty ‘rustling’ or ‘frying’ noises! This might not sound very important from the dry warmth of a recording studio, but if you’re recording Sir David Attenborough in a tropical rain forest it makes a really big difference!

A final thought that occurred to me is that as you’re “new to this malarkey”, you may be considering buying just one decent quality mic. And with that in mind, it’s perhaps worth pointing out that you can buy a very high-quality moving-coil mic for a lot less than the equivalent quality capacitor mic — so if you have the chance to do so, do try out a few different mics before you buy.