Q. Why does it take so long to freeze a VST Instrument track? 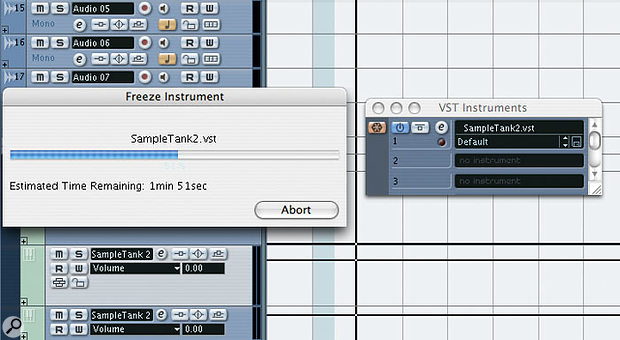 The time it takes to freeze a track in Cubase SX 2 will vary depending on the length of the Project.

I use Cubase SX 2 and find the Freeze function for VST Instrument tracks very useful. I was disappointed to note that it can take six or seven minutes to freeze a VST track. Why is this, when it only takes one to two minutes to export an entire composition as a WAV file?

PC music specialist Martin Walker replies: Steinberg introduced their Freeze function in Cubase SX version 2.0, and it's certainly handy to be able to turn CPU-hogging software synths into normal audio tracks and then deactivate them, especially as it's a reversible process, so you can still go back and make changes later on.

Unfortunately the current version of Steinberg's Instrument Freeze function relies on the Project Length when performing its calculations (you can find this in the Project Setup window, launched from the Project menu). By default, each time you create a new project, its length gets set to a different default setting depending on which template you select. For instance, the 16-track MIDI Sequencer template defines a length of six minutes, the Empty and Default templates both have lengths of 10 minutes, while the 16-track Surround Mix and 24-track Audio Recorder are both defined as a huge 30 minutes.

Each output of the various VST Instruments used in your songs is also scanned for a potential audio signal throughout the entire length of the project, which further complicates the calculations, making them take longer. Steinberg have admitted that this is the 'first generation' of their new Freeze function, and have already stated publicly that improved features and speed increases are planned for future releases.

In the meantime, since most songs tend to be far shorter than the default settings, the easiest way to ensure that your freezes take less time is to open the Project Setup window and set the Project Length to just slightly longer than your song. Leaving this extra room should ensure that any long note-release times and reverb tails are properly captured in the frozen version.