Q. Why does my USB mixer make a whining sound?

I have a Core 2 Duo PC, Yamaha MW10 USB mixer, Alesis RA150 power amp and JBL speakers. I use high-quality cable from amp to speakers, a TRS-wired jack lead between the mixer output and amp, and a good-quality USB cable between my mixer and computer.

My problem is a slight, audibly noticeable (and recordable!), annoying high-pitched 'whine' from both speakers when Reaper is booted up and set ready for recording. To date I have isolated or switched off all other equipment and had only the computer, amp, mixer and LCD monitor powered from one surge-protected domestic plug board going to its own mains power socket in my small bedroom studio, but the noise persists. Apart from this noise, all the audio works fine via the loaded MW10 drivers. Other stuff in my studio includes some outboard hardware powered by wall-wart PSUs, but I've had these switched off and disconnected and the whine still persists. I'm stumped.

Reason's Hardware Interface is the key to using up to four external hardware controllers to control the devices in the Reason rack. Devices are chosen for each MIDI input bus using pop-up menus accessed by the arrow button under each channel 'LCD'.Malcolm Furneaux

SOS contributor Martin Walker replies: I suspect that you have run into a common problem faced by many musicians who use USB and Firewire peripherals. The whining noises you hear are due to a ground loop, and you may also notice them changing when you move your mouse, access your hard drive or update your graphic display.

A ground loop occurs when there's more than one ground path between two pieces of gear, and nowadays is comparatively common when connecting an earthed computer via an audio interface to an earthed mixing desk or power amp. As I described in SOS July 2005 (www.soundonsound.com/sos/jul05/a...), there are three common ways to break such loops safely (depending on whether or not the gear you're using provides balanced inputs and outputs), and they are: using balanced audio cables; using pseudo-balanced audio cables; or using a ground-loop eliminating box containing an isolating transformer, such as the ART Cleanbox II, reviewed in SOS August 2005 and typically costing under £35 in the UK or around $50 in the US. 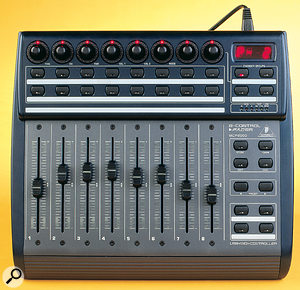 They may not be touch-sensitive, but the motorised faders on the Behringer BCF2000 are a bonus at this price point.

In your case, the Yamaha MW10 mixer and the Alesis RA15 power amp both provide balanced I/O on TRS-wired jacks, so if you've already got a pair of balanced, TRS-wired cables between the two for left and right channels there's no possibility of a ground loop here. You've already been systematic by unplugging all the gear except the computer, monitor, mixer, and amp, to rule out other ground-loop possibilities.

So where's the problem? Well, since your PC and USB mixer are each earthed via their respective mains plugs, the ground loop is, on this occasion, completed via the USB cable that connects the two. Try unplugging the amp and USB cable, and then listening to the headphone output on the Yamaha MW10. If the whine only reappears when you plug the USB cable back in (or even touch the metal of its plug to the chassis of the other gear), you've confirmed the culprit.

I'm sure that many manufacturers of mains-powered USB and Firewire audio peripherals incorporate safeguards that circumvent such computer ground-loop problems. Nevertheless, I know of many owners of USB or Firewire mixers, audio interfaces, MIDI interfaces, and even the occasional music synth/keyboard controller with USB MIDI output for connection to a computer, that have been plagued by them.

Synth users can often cure such problems by abandoning the USB output in favour of the alternative opto-isolated MIDI connection, while laptop owners can safely bypass their computer's mains earth by running on batteries or replacing an earthed mains PSU with a Universal double-insulated model (see the PC Notes column in this very issue for more details). However, desktop and tower PCs require a mains earth, and you can't remove this for safety reasons. US readers might like to try Ebtech's Hum X adaptor (www.ebtechaudio.com/humxdes.html), but I haven't yet found a European equivalent.

I have heard of a few musicians modifying the USB or Firewire cable by cutting through its outer plastic sheath near the plug at one end and carefully severing its outer screen connection, but although this may cure the audio interference, it often prevents reliable data transmission. Specialist USB isolators are available that are, in effect, DI boxes for USB connections (one example is the USB-GT from Meilhaus Electronic (www.meilhaus.com), but they generally don't come cheap.

If you experience this problem, you may simply have to minimise its effects. Plugging all your mains appliances into the same mains distribution board, to create a 'star' system with everything powered from the same mains wall socket, can often reduce the interference, as can trying different lengths of USB/Firewire cable (generally, shorter ones will be better). If I track down any more definitive solutions, I'll publicise them in PC Notes.