Q. Why has Paloma Faith's latest track been recorded 'out of tune'? 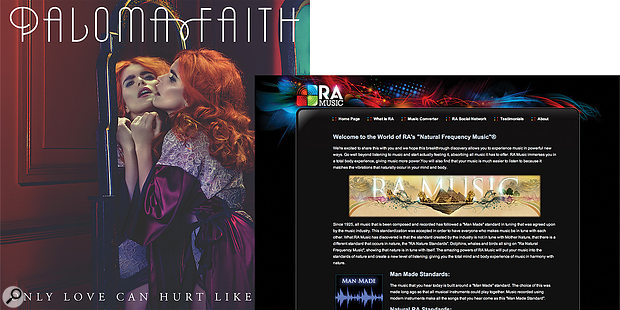 Is the eccentric tuning on Paloma Faith’s ‘Only Love Can Hurt Like This’ due to design or mistake?

I realised yesterday looking at the official YouTube video for Paloma Faith’s new song ‘Only Love Can Hurt Like This’ that it has been recorded out of tune by about 50 cents. This means that unless you have a keyboard that can be detuned you cannot play along! I found this out when teaching it to a singing pupil and I’ve never come across it before. What would be the reason for doing this?

SOS contributor Mike Senior replies: Having imported this track into my own DAW, it sounds like it’s about 35 cents sharp, in fact, and as you say it’s enough to put a spanner in the works if you want to play along — so I’d expect any producer operating in the mainstream pop arena to have second thoughts about doing that deliberately.

From a technical perspective, one reason you might want to do this is because you’re building the track around some crucial element that isn’t at concert pitch. Live ensembles will often retune to match an unavoidably off–pitch piano or organ, for example, and in this specific production I wonder whether the brass riff you hear at the outset might be a phrase sample that was slowed down to fit a new tempo, thereby dropping its pitch. Paloma might very well have then recorded a load of vocals over the programming without anyone noticing the non–standard pitch reference, at which point any subsequent change would have risked unwanted pitch–processing artifacts on the vocal recordings — potentially a reasonable justification for sticking with the sharper pitch. That said, I don’t give that explanation much credence myself, because I reckon there’s pitch processing all over this record already, and I’m not convinced 35 cents more shift would have made a tremendous sonic difference with any self–respecting pitch–correction algorithm.

Producers frequently change the pitch of a production so that it better fits the singer’s vocal range, especially in cases like this where the line happens to cover such a wide range — almost two octaves. But I don’t think this would be a good reason here, as a shift of 35 cents would make very little difference to the singability, so there would have been no impetus to stray from simple concert–pitch transpositions on those grounds in my opinion.

My best guess is that a repitching decision was made more on aesthetic grounds, and that the track’s playback rate was increased late in the production process (possibly even during mastering), to remedy a perception that the initial tempo choice was too slow — a common pressing–room quick–fix back in the analogue days wherever the master tape machine boasted a varispeed control. Although software can now change the tempo of a complete mix without changing its pitch, many people prefer a bit of pitch–change to the warbling side–effects that can arise with even the most sophisticated digital time–stretching algorithms.

Mind you, another forum poster suggested an intriguing alternative thought: that the music might have been deliberately recorded in the RA Natural tuning system, which uses a 424Hz reference pitch, thereby shifting the musical ‘grid’ of semitones about 64 cents flat — or 36 cents sharp (depending on how you look at it), which would tally pretty accurately with what’s going on in this song. You can check out the full philosophy behind RA Natural tuning at www.ramusic.com, but basically it revolves around the two mathematical values Pi and Phi, manifestations of which are abundant in Mother Nature. Proponents claim it helps music to communicate more directly and instinctively. However, there are no other pitch–offset tracks on Faith’s album, A Perfect Contradiction, and I couldn’t find any amongst other work from the single’s two producers either, so I’m pretty sceptical that esoteric mathematical theory was a hot topic in that particular control room.

But given that this song has been the artist’s biggest UK hit, might the RA Natural effect have been a contributing factor? Come to think of it, the song is in tune with UK mains hum too, which also happens to be 35 cents sharp of concert pitch — maybe that was responsible! Clearly, Diane Warren’s songwriting credit had nothing to do with it. (And, before you ask: no, Warren’s very much a 440Hz kind of lady!)