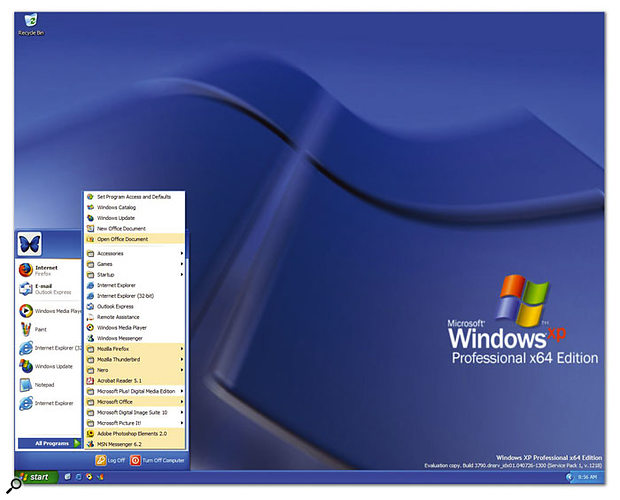 Apart from a new design of wallpaper, there's little on the surface to distinguish the new Windows XP Professional x64 Edition from the 32-bit XP versions, although the underlying code is completely different.

The magic number of 64 is gradually working its way into all aspects of our PC experience: processors from both AMD and Intel, the Windows XP OS, hardware drivers, and — coming soon — 64-bit music apps. But what should we be aware of as we consider the transition from 32-bit?

Intel's new Pentium 4 600-series 64-bit processors were launched in February, giving anyone about to purchase a new budget PC a rival to AMD's increasingly popular Athlon 64 range. Initial tests with Intel's 600 series indicate that its 3.6GHz P4 model offers almost identical performance to an AMD Athlon 64 3800+ model with the current 32-bit Windows, although as I write this it seems too early to form an opinion about their relative 64-bit performance, as so few 64-bit applications are available. However, as with many past comparisons, an Intel-based solution still seems to be slightly more expensive than an AMD one of equivalent performance.

Microsoft's Windows XP Professional x64 operating system is due to ship in April (so should be available by the time you read this) and will finally enable many existing users of PCs with processors including AMD's Athlon 64 and Opteron, and Intel's Xeon and P4 600 series, to benefit from 64-bit computing. However, as I mentioned in last month's PC Notes, only applications that have been optimised and re-compiled to take advantage of its new capabilities will provide better performance.

Most mainstream users are unlikely to get worked up about 64-bit computing, unless the marketing people pull off something really special, as it won't benefit the vast majority of mainstream or even office applications. However, a fully 64-bit PC will theoretically be able to utilise far more memory (64GB in the case of Intel's new range, and 1024GB for AMD's 64-bit processors), which means that some musicians may be able to abandon sample streaming from their hard drives in favour of 'instant' access from system RAM, with correspondingly vast polyphony as a result. However, the actual RAM ceiling of any 64-bit PC is more likely to depend on the motherboard limits than anything else.

The second benefit of 64-bit architecture for musicians is its improved floating-point performance and the greater number of internal registers, each of which is 64 rather than 32 bits wide. This will result in far more efficient audio algorithms: early indications from Cakewalk's Sonar x64 Technology Preview indicate that we can hope for performance gains of up to 30 percent from a 64-bit-capable processor running under Windows XP Pro x64 in 64-bit mode (compared to using a processor of the same clock speed with the Windows XP 32-bit operating system and 32-bit Sonar application).

Fortunately, all the signs are that Windows XP x64 is already extremely compatible with most existing 32-bit apps (subject to a few caveats that I'll come to shortly), which is a relief, considering how much most of us have invested in them. Existing 32-bit apps will also be able to access up to 4GB of memory if the Large Address Aware switch that I discussed in last month's PC Notes has been used.

In Gigastudio 3, Tascam abandoned their previous regime of saving NFX1 plug-in user presets into a single file in the C:\Windows folder and replaced it with a collection of individual FXP files inside the C: \ Program Files \ Tascam \GStudio \ Presets folder. Tascam also took the trouble to convert the contents of any existing NFX files to the new format, so if, like me, you upgraded from version 2.5, your old NFX1 presets will be ready and waiting for use in their new format.

This also means that presets can be swapped more easily with other GS3 users. During my exploration of the NFX1 reverb plug-in as part of a Gigastudio Power Tips feature in SOS September 2002, I created a bank of 21 presets ranging from halls, gymnasiums and cathedrals to special effects such as 'Ricochetverb', 'Boomverb', and 'Splatterverb'. NFX1 has always been more capable of smooth tails at low CPU overhead than many users realised, and of course GS3 Solo and Ensemble purchasers don't get the Gigapulse Pro convolution reverb, so if anyone would like a copy of these presets, just drop me an email.

Perhaps understandably, Microsoft have finally abandoned support for 16-bit legacy and DOS applications in x64, so we may have to leave behind some of our 'old faithful' utilities. Unfortunately, many 32-bit applications also use 16-bit installers, and these will need updates from their developers before they can be installed under x64, so yet more may fall by the wayside. There's no doubt about it: the change-over could be messy for many people, especially since every hardware item will require 64-bit drivers to be compatible.

While some interface manufacturers, including Creative, Edirol,and M Audio, have already developed suitable drivers for their audio interface ranges, many others haven't yet, and some never will. For instance, my Yamaha SW1000XG soundcard would be an early casualty, as Yamaha have long since abandoned further development on a product that was originally launched in 1998. Its MIDI synth may not be cutting-edge, but I'm not looking forward to having to discard it altogether.

Other casualties are likely to be scanners, printers and the like, which are often so quickly superseded by newer models. Even the various devices on the motherboard will require 64-bit drivers in order to function, and at the moment some early adopters of Windows x64 are finding themselves (for instance) unable to use some onboard SATA RAID controllers and sound chips.

Nevertheless, for anyone thinking about buying a new PC at the moment, it makes sense to strongly consider a 64-bit one, even if, for the time being, you buy it with the 32-bit Windows XP installed and continue to run it in 32-bit mode until you replace any non-64-bit hardware. Microsoft have announced their intention to offer a 'Technology Exchange Program', so that customers who buy a 64-bit capable PC with Windows XP Pro pre-installed can swap their operating system for XP Pro x64 later on. This won't be an update — it will require a clean install and re-installation of all your applications, which is usually a major undertaking. Nevertheless, it does sugar the pill for those who simply can't wait to buy their next PC, yet don't want to make an expensive mistake.

Meanwhile, further to my discussions in PC Notes January 2005, dual-core desktop processors (two processor cores on a single piece of silicon, shipped in an identical package to a single-core processor) are now expected from both AMD and Intel during the second half of this year. However, while AMD's dual-core Toledo Athlon 64 processor range should require only a BIOS update to be fitted onto most existing Athlon 64 motherboards, Intel's new Pentium D will require a new motherboard, with an as-yet-unreleased 945 or 955X chipset. So, for the moment, it looks as if buying a PC based on the Athlon 64 is safer for anyone who wants their investment to last as long as possible.

Like many other enthusiastic designers using the PC-only Synthedit design environment, Jean-Marc Duchenne's web site offers both plug-ins and soft synths. However, he's also a musician with a passion for spatialisation and 'acoustic space composition', so once you enter the world of Acousmodules (http://acousmodules.free.fr) the idea is not to get your head around the sounds, but rather the sounds around your head. 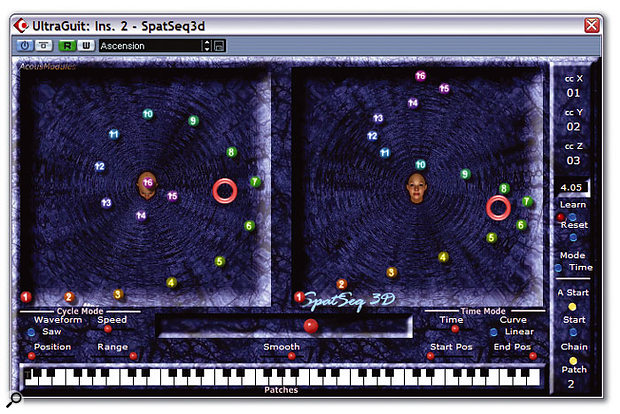 If you like experimenting with surround, you'll love these freeware offerings from Acousmodules, which offer sophisticated control over the movements of multiple samples in a 3D world. They also allow you to generate three sets of MIDI controller information, based on user-created paths, for controlling further spatialisation plug-ins.

On offer are 'Playing Surfaces' such as Animasampler 3D, which animates various parameters of eight samples using a 3D gaming joystick (one with a rotating handle) into eight outputs, designed to be fed into eight speakers set up at the corners of a cube. Other hardware controllers, such as a mouse, standard joystick or graphic tablet, can be used with his Joysynth, Joysampler, and Joymachine. 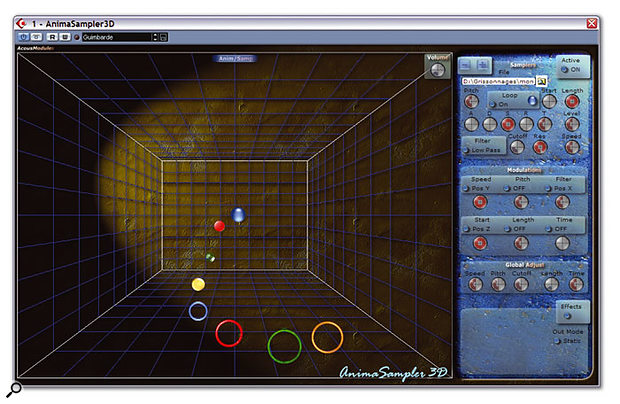 For host applications that can accept MIDI output data from plug-ins (such as Cubase, Nuendo, Sonar, Energy XT, Synthedit, Console, and Bidule) there's a range of MIDI controller plug-ins that can generate up to 24 sets of controller data derived from just one gesture on a 3D joystick, or animate them from mouse movements. There are also 'trajectory' plug-ins to capture performance movements, or generate 3D paths that are output on three MIDI controllers, for spatial or other multiple-parameter control, MIDI processors that generate, transform or refine MIDI note or controller data, various utilities and test generators, and even plug-ins to visualise and control the P5 virtual reality glove controller (www.essentialreality. com).

Various spatial processors are also available, such as Spatgrains 8, which provides octophonic granular processing so that each grain can be separately positioned within eight outputs. You can also try out multi-channel feedback delays, resonant filters and frequency band-splitting.

There are dozens of free downloads here, and many of them look visually stunning with their spatial animation. Some are still experimental and are very CPU-hungry. Nevertheless, this is a truly inspiring collection for anyone who wants to explore new control methods and spatial possibilities.