Things get messy as we explore Live’s numerous distortion effects...

Screen 1: When fed a sine wave, Live’s six distortion effects produce the wave shapes and frequency spectra in the right column from the settings shown to their left.

These six devices offer a variety of unusual features that are covered in detail in the May 2011 Live column ‘Distortion Effects In Live.’ This month we’re going to look at how to choose among these devices, how to combine them with other Live effects and where to place them in the effects chain.

A Sine Of The Times

Let’s start with a look at how each of these devices affects the simplest thing you can feed it: a sine wave. This will indicate how noisy the results can be and how you might expect more complex sounds to be affected. Screen 1 (above) shows control panel settings for each device, along with the waveshape and frequency spectrum of the result of using these settings to process a sine wave. The spectra were captured from Live’s Spectrum audio effect, which is a good tool to keep in mind when exploring distortion plug-ins.

The prominent peak about a third of the way through each spectrum marks the frequency of the sine wave source, A2 (220Hz) in this case. Erosion with noise modulation adds the most noise and the fewest clear peaks, with Redux bit reduction coming a close second. Redux also produces the most radical waveform: the setting of 4-bits allows only 16 levels across the full amplitude range. Noise-modulated Erosion produces a constantly changing waveshape. Vinyl (in Tracing mode) and Saturator create the clearest peaks along with the least noise, and the corresponding waveforms look the most natural. Dynamic Tube and Overdrive fall somewhere in the middle — adding clear peaks along with a bit of noise — and the resulting waveforms exhibit some clipping.

What each of these effects will do to your source material is not at all obvious, so one good way to choose among them is to try them all. The easiest way to do that is to use an Audio Effects Rack with a chain for each effect along with an empty chain that you can select to hear the unprocessed sound. The Rack at the bottom of Screen 2 (below) shows this setup with the Rack’s Chain Selector mapped to the first Macro knob. Because the seven chains do not overlap and the Auto Select button (circled in red) is turned on, changing effects with the knob, or a MIDI controller mapped to it, conveniently brings the associated effect into view. (The Saturator control panel shown at the right end of the bottom Rack is expanded from the control panel shown in Screen 1, thereby revealing Saturator’s six controls for dialing in your own waveshaping waveform.)

To get to grips with using these effects on a variety of sources, I’ve created a similar Instrument Rack (top of Screen 2) to select among four different Live instruments: Operator, Electric, Simpler and Impulse. The Operator preset uses only Oscillator A and is intended for auditioning the effects applied to simple waveforms — it was the source of the sine wave used in Screen 1. Electric lets you try various electronic keyboards, Simpler is for triggering loops and one-shots from your library, and Impulse holds a basic drum kit. Here are some things to keep in mind when using this setup:

You can, of course, combine any distortion effect with other effects processing. There is no ‘right’ choice for the order of effects in the chain, although distortion effects are often placed first. With EQ, for example, deciding which effect comes first depends on whether you want to distort the EQ (EQ first) or EQ the distortion (EQ last). The chain at the top of Screen 3A uses Dynamic Tube’s Warm Tube preset to process an electric guitar loop containing three loud peaks. The original preset has the Bias set low with no Envelope applied. Increasing the Bias comes close to the sound I want and the negative envelope setting partially compensates for the peaks. Preceding Dynamic Tube with Compressor’s Brick Wall preset lets me tame the peaks further, dialing in the amount I want with Compressor’s Dry/Wet knob. There is some cost in brightness, however, and using EQ Three at the end of the chain compensates for that as well as cutting off some unwanted low end. Any other order for the effects does not accomplish the same thing. 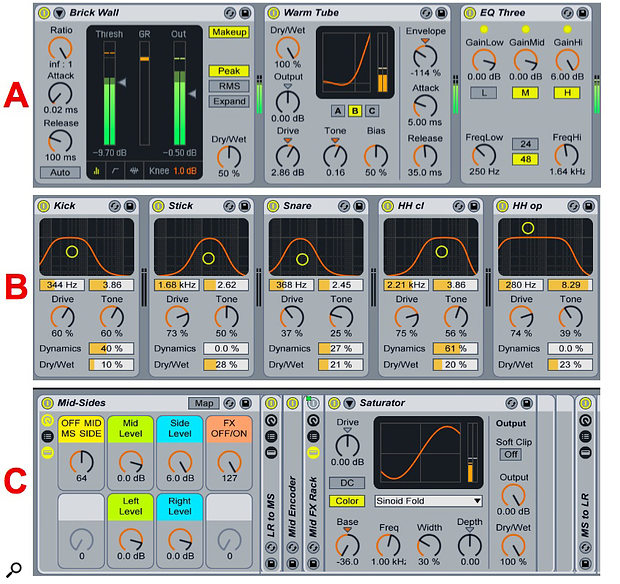 Screen 3 (A, B, C): A rhythm guitar loop is roughed up by Dynamic Tube, preceded by brick-wall compression and followed by EQ (A). Individual Overdrive effects process five kit pieces in a drum rack (B). Saturator is applied to the Mid component of a guitar, bass and drums mix, whereas the Sides component is simply boosted by 6dB (C).

Although Saturation is the go-to effect for percussion tracks, Overdrive is an excellent choice for processing individual kit pieces in a Drum Rack. For one thing, the X/Y-controlled pre-distortion band-pass filter lets you set the frequency range to fit the kit piece. The remaining four controls let you then dial in the amount of distortion (Drive), how much compression is added with increased distortion (Dynamics), post-distortion high-pass filtering (Tone) and the dry/wet output mix. Inserting a few Overdrive devices as shown in Screen 3B and dialing in their settings while soloing the affected kit pieces is quick and easy and can make a big difference in your drum track. Also consider some of the more blatant distortion effects like Redux, Erosion and Vinyl Distortion for Drum Rack pads holding sound effects and less-used percussion. If need be, you can also use Saturator to process the whole Drum Rack. Try Saturator’s ‘A Bit Warmer’ preset. PSP Audioware’s Vintage Warmer 2 is another popular choice for compression with saturation; try one of its ‘Mix First Aid’ presets.

When you’re dealing with the Master track or a submix of several tracks you can often fix balance and presence problems as well as create novelty effects by applying different effects to the left and right channels or to the Mid and Sides signals. Screen 3C illustrates separate Mid and Sides processing for a guitar, bass and drum mix. Deriving the Mid and Sides signals is a simple job for Live’s Utility device, and you can find the details in the November 2015 Live article ‘Too Good To M-S’ or the September 2012 Live column ‘Tool Up’. The setup shown here applies saturation to the Mid signal (the mono sum of the left and right channel), which comprises most of the bass and drums and a bit of guitar. The Sides signal (the mono sum of the left and phase-inverted right channel) is mostly guitar. The guitar is a bit low in the original mix, and this setup gives a 6dB boost to the Sides level before converting back to stereo. There is no other processing of the Sides signal.