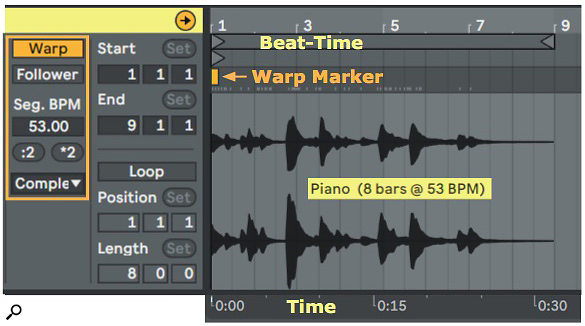 We show you how to work with irregular tempos and rhythms in Live.

In this workshop, we'll see how to use Live's sample warping to align tempo-based material such as step-sequenced clips with freely played audio clips. I'll start with a brief look at how audio clip warping works in Live. You'll find more details as well as some creative uses for warping in the March 2010 and August 2012 Live columns. For what follows, it's best to turn off 'Auto-Warp Long Samples' and to set 'Loop/Warp Short Samples' to 'Unwarped One Shot' in Live's Record-Warp-Launch preferences. (The best long-term settings depend on the kind of work you do with Live.) If you're already comfortable with warping, you might want to skip to the next section.

Start with a clip from your audio samples library that has not already been warped in Live and drag it to the beginning of an audio track in Live's Arrangement view. As shown in screen 1, Live's Beat-Time ruler along the top of Arrangement view shows the length in bars and beats, whereas the Time ruler along the bottom shows the clip's playback time in minutes and seconds. Beat-time is a function of Live's tempo and time-signature settings; change either and the clips Beat-Time duration will change while the playback time remains the same. Aside from shortening the clip from either end, you cannot change the playback time without activating Live's warping, which you do by clicking the Warp button in Clip view. Do that, and a new world opens up.

When you turn warping on, Live inserts an orange Warp marker at the beginning of the clip and assigns the song's tempo to the clip in the clip's 'Seq. BPM' box. The clip will then span it's natural playback time as shown on the Time ruler. You can change the clip's playback time either by changing the song's tempo or changing the clip's Seq. BPM setting. (If the Seq. BPM numerical won't change, select the warp marker.) Once warping is enabled you can add and move Warp markers to force different parts of the clip to play at different speeds. This happens because the number of samples between adjacent warp markers remains the same while moving one of the warp markers changes the time between them. Notice that the Seq. BPM setting is the tempo between the selected warp marker and the one to its left. The first warp marker shows the same tempo as the second warp marker if there is one; otherwise it shows the clip's global tempo. Below Seq. BPM you'll find buttons to double and halve the tempo, and below those, a menu to select the Warp mode, which is how Live handles differences in the playback rate caused by moving warp markers. For these examples, you'll want to choose the Complex or Complex Pro warp mode.

Screen 1 (above) shows an eight-bar, freely played piano clip, most of whose notes do not fall on standard grid divisions. Adding parts such as bass and drums by playing, using a step sequencer or manually entering notes, might seem like a heavy lift, but in Live's Arrangement view, it's quite easy. The first step is to create warp markers at the notes in the piano clip to which you want to sync and to then drag those warp markers to lines in the grid you want to use when warping other clips. You don't need to worry about how it sounds, because at the end of this process the piano clip will play with its original timing. This is accomplished by clicking the button labelled 'Follower' below the Warp button, which will then change to orange and be renamed 'Leader'. This inserts tempo automation on Arrangement view's Master track to play the Leader clip at its unwarped rhythm — moving warp markers closer together decreases the tempo and moving them further apart increases it. The resulting tempo changes will, of course, also apply to any other MIDI or warped-audio Arrangement view clips playing at the same time. When you're adding parts by playing, you might prefer to play against the warp-quantized version of the piano with its consistent tempo and rhythm. To do that, leave the piano clip in Follower mode to record the part and then switch it to Leader mode to have both parts conform to the piano's original rhythm. 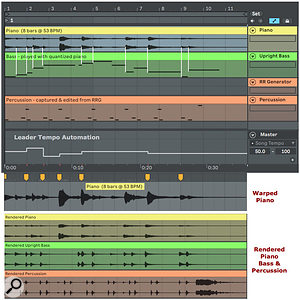 Notice that when any clip is in Leader mode, the Master track's tempo automation is greyed out and cannot be edited. If you turn Leader mode off, the automation disappears, but you can get around that by right-clicking in the automation lane and choosing 'Unfollow Tempo Automation.' That leaves the automation in place so that you can tweak the tempo and have the adjustments apply to all tracks.

Leader warping is also good for aligning tightly quantized material, step-sequenced, mouse-entered notes and for small changes in the groove.

Up to this point we have relied on tempo wiggling to align MIDI and audio clips with a Leader clip. You can eliminate the need for tempo automation by rendering the tracks as unwarped audio files, and you can do that for the mix or for the individual clips. To render individual clips, select the desired Beat-Time range and then select each of the tracks you want to render (in this case, the Piano, Upright Bass and Percussion tracks in the first 12 bars). Next, invoke Live's Render function (Shift+Cmd+R/Shift+Ctrl+R). Now choose 'Selected Tracks Only' from the Rendered Track drop-down at the top of the Render dialogue, ensure the Render Start and Render Length settings are correct and click the Export button at the bottom. Live will produce a separate audio clip for each track. Played together without warping, they will replicate the warped, tempo-automated mix. 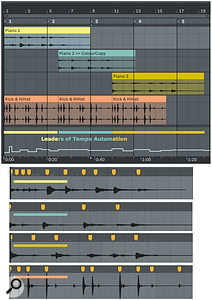 Screen 3. Three freely played piano parts share warping leadership of a looping kick and hi-hat track. Warping for all tracks is shown at the bottom.In more complicated setups you can have Leader clips on several Arrangement view tracks. When you do that, the Leader clip on the lowest track rules. In Screen 3, I've placed different freely played piano clips on separate audio tracks. They overlap slightly and have different pan positions and audio effects processing. Each has been warped and made the Leader in order to control the timing of the five-bar kick and hi-hat loop in the bottom track. Notice how the Master track's tempo automation pattern changes as it follows the three different leaders. To belabour the obvious: tempo automation ensures that events in the lowest Leader clip occur at their natural time and that events at the same beat-time position in the other clips are warped to that time.

Leader warping is also good for aligning tightly quantised material, step–sequenced, mouse-entered notes and for small changes in the groove. Live's Groove Pool (covered in the November 2013 Live column) is the easiest and most flexible way to match a short repeating groove, but for capturing the groove of longer clips, 'follow the leader' is the way to go.

Finally, you can use Leader warping to save and restore existing tempo automation. It requires a few steps, but it's a lot easier than redrawing the automation in the Master track's Song Tempo envelope editor. Once you have the tempo automation you want to capture, create a MIDI track and insert an instrument on it (an empty Live Instrument rack will do). Create an empty MIDI clip on that track the length of the tempo automation to be captured. Freeze and Flatten the MIDI track. You'll get a silent audio clip with a warp marker corresponding to each tempo change. Save that clip in your library or project folder. To use the tempo automation at any position in any Live song, simply add the saved audio clip, activate its Leader button (ensuring it is below any other Leader clips) and then right-click in the Tempo Automation lane and choose 'Unfollow Tempo Automation.' You can then delete the clip or the entire track.