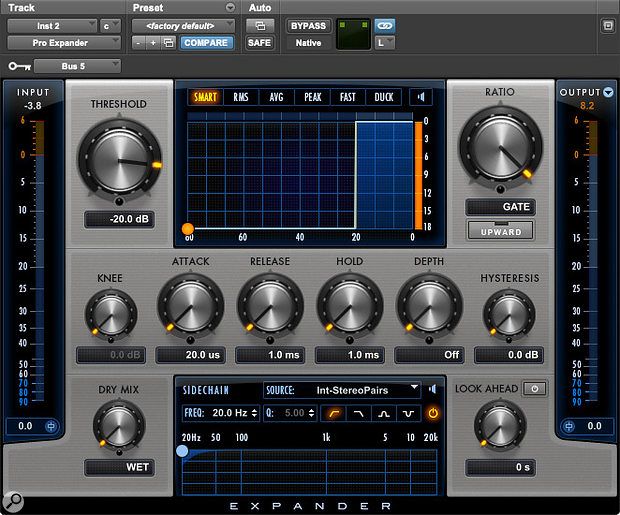 A good way to explore the effect of the Hysteresis control is to feed Pro Expander from the Boom! drum machine, using a kick-drum sound with a long tail.

In my November 2019 Pro Tools column I wrote at some length about Avid's Pro Compressor, highlighting it as the star of the Pro series of plug-ins. Now standard with active upgrade plans and subscriptions, these have become almost stock plug-ins, and they're very powerful. They might not have the charisma of hardware emulations but they have comprehensive features and well thought-out interfaces, and sound great. You can probably tell I'm a fan.

No plug-in from the Pro series better illustrates this depth of features than the Pro Expander. How interesting can a gate be? Well, turns out it can be more interesting than first impressions suggest.

Could You Expand On That?

To really understand hysteresis, try setting up a simple kick-drum track using a pattern from the Boom! virtual instrument, with an 808 kick on beats one and three at 120bpm and the decay set to its full length. Instantiate a Pro Expander plug-in after Boom!. If you set the kick on beat one at full velocity but the kick on beat three at medium velocity and set the Pro Expander as shown in the screens, you should get both kicks passing through the gate. You'll hear that both kick drum beats get cut off sharply by the very fast release, but the softer kick on beat three gets cut off much more quickly, as its tail falls below the threshold sooner.

More acceptable results can, of course, be achieved using a longer release time, but in this case it might be more appropriate to lengthen the Hold time. As the name implies, this leaves the gate open for longer before the release phase kicks in, and in this context, holds the gate open the same amount of time for both kicks, with markedly different-sounding results. Once you've tried that, set the Hold back to its minimum and instead try opening up the Hysteresis control. This time, the gate stays open longer because the gate's closing threshold, for signals falling in level, has been lowered relative to the threshold for rising signals, which are opening the gate. Unlike Hold, it is a level-based parameter, and in this case it gives different results for each kick because they differ in level. Because the softer kick exceeds the threshold by less, it still reaches the threshold during its decay sooner than the loud kick. 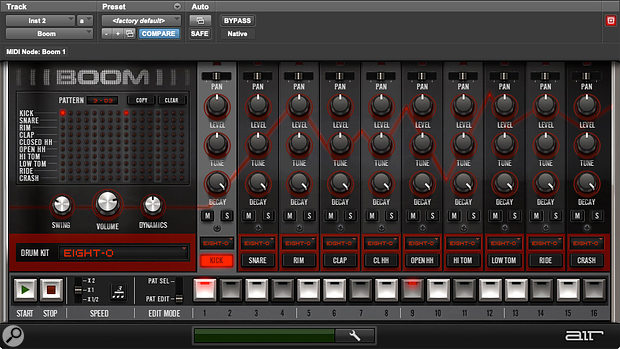 As is so often the case, sometimes the cure is worse than the disease. For instance, if you're trying to reduce the level of unwanted bleed onto a source, the sound of the expander/gate opening and closing can easily become more distracting than the noise it was trying to disguise. Longer release times can help, but using the Depth control can help more. This sets a maximum amount of gain reduction to be applied, so that rather than cutting the sound completely when it falls below the closing threshold, it just gets reduced. Often, as little as 6dB of expansion or gating can be enough to push the noise or bleed down out of harm's way, and 12dB is usually enough for all but the most obnoxious of hi-hat spill on a snare mic.

The Depth control can be particularly useful when exploring some of the less traditional applications for gating and expansion, as can the different detection modes at the top of the window. Smart is, as the name suggests, intelligent enough to sort out most scenarios, but I find Average useful when setting up tremolo effects. There is no dedicated tremolo plug-in in Pro Tools, and of all the possible workarounds, I get the best results using Pro Expander keyed from a drum track or other periodic audio source that isn't routed to the rest of the mix. Using short attack and release times can create a chopped effect; lengthen the Hold value to adjust the duty cycle (ie. the relative durations of the loud and quiet parts of the tremolo effect), and increase the attack and release times to soften the modulation. The Depth control sets the depth of the effect precisely.

Very similar effects can be created by using expansion instead of gating, and changing the knee setting to vary the sharpness of the modulation. Whether you see experiments like this as pointless time wasting or an enlightening investigation of your tools very much depends on your point of view, but these interdependencies are what makes dynamics processing such a fascinating area.

As well as doing all the jobs you would expect from an expander/gate, Pro Expander is also a really handy educational tool for understanding the way it all works.

The Depth control comes into its own with one of the most useful and most overlooked features of Pro Expander: the Ducking mode. Most people are familiar with ducking in its best-known application, namely automatically reducing the level of music when a radio DJ speaks into his or her microphone. This is simple to set up by using the mic as an external key for a dynamics processor controlling the level of the music. Most people use a compressor to produce the necessary gain reduction, but ducking as found in Pro Expander is actually a tidier way of achieving the same end, since it reduces the level above the threshold by a fixed amount rather than applying more gain reduction as the voice gets louder.

Ducking is also used in music production to push the level of other elements down to make room for a vocal or a solo instrument — or indeed to make the whole mix 'pump' against the kick drum in some dance styles. A more subtle application is to duck the level of effects returns so that they bloom during pauses but are pushed back during phrases. This can be achieved using externally side-chained compression but, again, 'real' ducking gives more precise control over the gain reduction.

When gain reduction is taking place, it's displayed on the graph in the upper central portion of the window, which plots input level against gain reduction. The dancing yellow dot represents the level of the incoming audio (it's red in Channel Strip) and is very useful for understanding the relationship between your attack and release times and the source material. If your time constants are set too slow to catch an incoming peak, you'll see the dot overshooting the line; this shouldn't be seen as something bad, but it is significant, and it is perhaps easier to understand with a gate than it is with a compressor. For example, when used with a very fast release, the dot follows the line perfectly, but with a longer release time, the dot tracks back downwards diagonally when the gate closes, giving a visual indication of the effect the time controls have on the functioning of the gate. Lots and lots of people have seen this action without realising what it means, myself included!

The relationship between dynamics processors and audio signals follows logical rules, but really getting under the skin of these processes can be frustrating. As well as doing all the jobs you would expect from an expander/gate, Pro Expander is also a really handy educational tool for understanding the way it all works, and one thing I'm sure of is that the more I know, the more I find there is to know. If you feel the same, spend some quality time with Pro Expander. 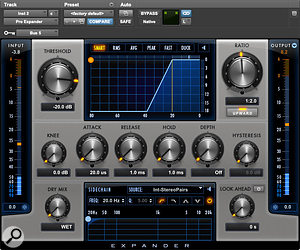 Upward expansion makes the loud stuff even louder. This is the opposite of compression, and can be useful to introduce greater dynamics into a performance, or to undo over-zealous dynamics processing, but things can easily get out of control. The Depth control can be used to limit the amount of gain increase, capping the maximum variation this effect can introduce as a sort of audio safety net.