The difference between Fast and Smart modes on a low-frequency signal is very visible in the EQ spectrum. In the upper screen, fast attack and release times visibly lead to odd-harmonic distortion.

You probably already have one of the best Pro Tools compressors around — but you might not know it!

It's tempting to view third-party plug-ins as being inherently more desirable than your DAW's stock effects. There are, of course, third-party plug-ins that are absolutely unbeatable, and so there should be. If your job is creating the very best EQ, compressor or reverb, then a company who have the rather bigger task of creating and maintaining a DAW have no business beating you at your own game! However, while there are plenty of very respectable plug-ins in the stock complement which ship with Pro Tools, the definition of exactly what constitutes a 'stock' plug-in has become a little more flexible recently.

The Avid Pro Series plug-ins are a case in point. If you have a current Pro Tools rental subscription or a Pro Tools Ultimate upgrade plan then you get access to the Pro Tools Complete Plug-in Bundle, the highlight of which is, for me, the Pro Series Plug-ins. These are every bit as good as any premium plug-in I've ever used, and if you were to ever pass them by because they are Avid plug-ins and so are in some way less interesting than your third-party plug-ins, you would be doing them and yourself a great disservice.

If you want more reasons to pay attention to the Pro Plug-ins, remember that as 'nearly stock' plug-ins, their availability to anyone with a current Ultimate upgrade plan or Pro Tools subscription means they are by definition more ubiquitous among Pro Tools users than any third-party plug-in. And unlike many third-party efforts, all the Pro Plug-ins are offered in AAX DSP as well as Native format, and are usable in surround formats up to 7.1. They also have some neat features you might not be aware of...

I'd never noticed before that the depth control ranges differ, with the Channel Strip's running to -108dB but the Pro Compressor's bottoming out at -36dB. This might sound like an irrelevant detail, but points towards the strength of the Pro Compressor, which is its carefully thought-through usability. The part of a depth control that actually gets used is the top 20 or so dB, so the huge range available on the Channel Strip just makes it harder to set precisely.

Another feature that helps the Pro Compressor deliver results quickly is Smart mode. Channel Strip has two modes: Avg and Peak. Pro Compressor adds three more called Smart, RMS and Fast. Hardware VCA compressors have had an auto mode to handle release times for years, a feature oddly absent from the majority of plug-in compressors. Smart mode takes this feature firmly into the 21st Century, and it's one of those controls that just always works.

Hardware VCA compressors have had an auto mode to handle release times for years, a feature oddly absent from the majority of plug-in compressors. Smart mode takes this feature firmly into the 21st Century.

A mix control for parallel compression is pretty much de facto on compressors these days. Though no such control is available on the Channel Strip, Pro Compressor does have one. Like most people, I use parallel compression when I want to add energy by bringing up the level of information below the threshold while leaving transients relatively unaffected. Parallel compression is also used by some to dial back the effect of very aggressive compression, but I find this is often better achieved by using the depth control to limit the amount of gain reduction. Dial up some very aggressive drum compression 100 percent wet and then pull the depth back to around 6dB. It can be a great effect.

To really hear what you are doing when setting attack and release times, try the Attenuation Listen mode. Clicking the speaker icon on the right of the detector mode lets you hear just what is being attenuated. For example, if you want to accentuate the attack of your snare, activate Attenuation Listen mode and lengthen the attack until the crack of the snare has just gone and you're hearing a softer edge. Disengage and adjust to taste. You might be surprised by just how long an attack time you end up with setting it this way.

No Gain, No Pain

The transfer curves in the Pro Series plug-ins don't plot input against output, as is conventional; instead, they plot input against gain reduction. These are easy enough to read, though they take a bit of getting used to if you're accustomed to the familiar display where no compression is indicated by a 45-degree line, limiting is horizontal and gating is vertical. To keep a close eye on exactly how much compression is happening, I often have my output meter set to display gain reduction. To do this, just click at the top of the meter, either on the word Output or on the blue button next to it, and you'll have a big, prominent gain-reduction meter.

Although the Pro Compressor doesn't feature any dedicated saturation or distortion controls, and is very much a clean dynamics processor, that isn't to say it lacks character — or perhaps it would be better to say that, being so flexible, it doesn't have just one character. It has whatever character you want it to have, and if you want timbral colour or harmonic distortion on top, just add some using another plug-in. That said, it's easy to add some distinctive odd-order harmonic distortion to the bottom end, because it's possible to set fast attack and release times. If you want to minimise distortion then Smart detection mode is your best choice, but if you want to add some grit, very short attack and particularly release times in Fast mode will introduce very audible distortion. This distortion happens because, at low frequencies, the individual cycles of bass frequencies are long enough to trigger gain reduction, changing the shape of the waveform. As the waveform is flattened off through the action of the compressor, it begins to approximate a square wave, hence the odd-order harmonic distortion.

Pro Compressor isn't new — it was introduced in 2013 — but it's pretty well specified, and the only 'modern' feature some will feel is lacking is a scrolling gain-reduction history display. Informative as these are, I personally have always been wary of using them; in the same way as spectrum displays in EQ plug-ins, I think they encourage an over-reliance on visual feedback and the associated risks of 'mixing with your eyes'. I know opinion on this is divided, but unless you really need scrolling gain-reduction history, I can't think of a reason why Pro Compressor wouldn't be your go-to Pro Tools compressor. Add an 1176 and an LA2A emulation to feed your vintage urges and you can do almost everything with only three compressors! 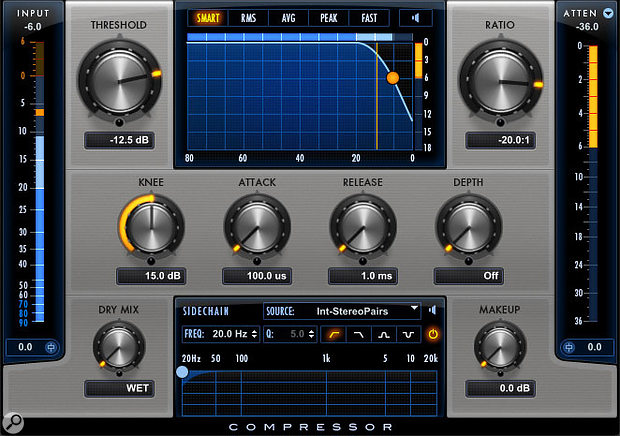 Negative compression: weird, but in the Pro Compressor, also useful!If you want to really put that gain-reduction meter to work, you could investigate the weird world of negative compression. The ratio control reaches limiting at the three o'clock position, but can go further. When you push it beyond infinity:1 it tips into a region where the dynamics of the signal begin to be reversed. In other words, the further above the threshold the input goes, the more it gets turned down at the output.

Interesting though it is, negative compression is usually seen as being "useful for special effects and sound design" — which as we all know is sound engineer code for "pretty much no use at all in the real world". In the Pro Compressor, however, it's combined with an unusually flexible side-chain filter, and this allows you to perform very surgical dynamic processing. For example, in a mastering application I was able to use the variable Q in the band-pass filter in the side-chain to focus the detector, working in Fast mode, on to an over-prominent snare drum; and, by going a little further than limiting into negative compression I was able to pull the snare down a little, while keeping the threshold setting quite high. This let me dig into the snare drum with minimal effect on other signal peaks.