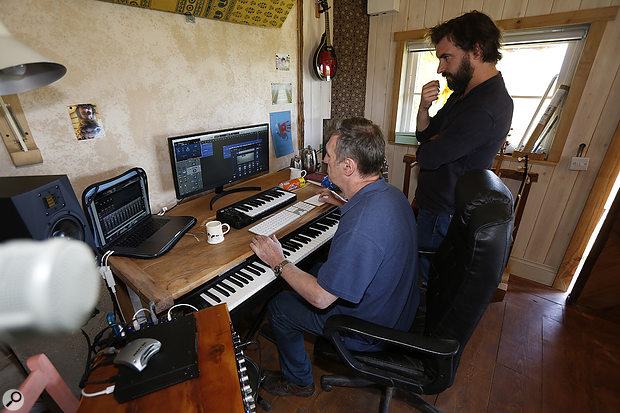 The SOS team help a reader track down the source of some mysterious hums and buzzes!

This month's Studio SOS took us just to the other side of the Malvern Hills in leafy Herefordshire, on a gloriously sunny day. The call for help originated with a post on the SOS Forum from TV and library composer Alex Attwood. Alex told us that his recording setup had started producing a low hum, audible on his ADAM A7X monitors, whenever he used any of his microphones through any of his three preamps, with any gain settings above about 30dB and whether phantom-powered or not. Alex's studio is set up to run Logic on a MacBook Pro with an external screen, using a UAD Apollo interface supplemented with a UAD Satellite. The A7X monitors had been set up on DIY concrete block stands either side of a large, home-made desk. Additional mic preamps were provided by an Audient ASP800 (connected to the Apollo digitally) and a Focusrite ISA428 Mk1 (connected to the Apollo's analogue line inputs). All three boxes are mounted together in a home-made wooden rack unit.

Alex added that the mic cables were all new and were connected to the preamps via a new stage box he had just installed at the back of his combined studio/control room. He closed his post by asking for a checklist of how to work through his equipment properly in order to track the problem down and, hopefully, solve it.

I duly responded with a suggested process for identifying the source of the problem, but as Alex was snowed under with composing work deadlines and a little out of his depth with the technicalities he contacted me directly to ask if we could pop over to help sort it out. This sounded like an intriguing challenge, and a little different from the usual acoustics problems customarily tackled in this column, so we found a day that suited all three of us and arranged to meet at Alex's studio.

Paul and I loaded the car with a selection of tools and test equipment sufficient to deal with any kind of wiring malady and drove over to Alex's place, which is located between Bromyard and Ledbury. En route we discussed some likely scenarios that could explain the issues Alex was having, and we both felt the most likely reasons would be one or more ground loops between the preamps and interface, and/or via the newly installed stage box — the latter being the favourite, since it was the most recent addition to Alex's studio system and recordings made with the rest of the equipment previously had clearly been satisfactorily hum free.

We found Alex's place down a narrow single-track lane with spectacular views across to the Malvern Hills, and were greeted by a couple of bouncy dogs as Alex emerged from his large, home-built garden studio. After a cup of coffee and the ritual opening of a new packet of chocolate Hob-Nobs, we asked Alex to demonstrate the problem and, sure enough, a considerable volume of mains-related hum ensued when the Apollo's first mic channel was faded up!

Tackling problems like this requires a methodical and patient approach, and I like to start at the back end of the system — the active speakers — and work forwards to the mic. So the first thing we did was disconnect the Apollo's outputs to the ADAM speakers just to check that the problem wasn't to do with a ground loop between the interface and speakers.

With their inputs disconnected the speakers were completely clean and hum free, although we did notice a very low-level high-frequency whine only in the right-hand speaker. That could have been stray interference because its input cable was unterminated, but it could also have been an internal instability issue in the tweeter amplifier and potentially the harbinger of a failure in the not too distant future. Certainly something to keep an eye (or ear) on!

Plugging the speakers back into the Apollo, the next logical step was to check out how the various preamps were wired into the Apollo interface, again with a view to finding or ruling out any ground-loop problems at that end. The eight-channel Audient preamp was connected via ADAT light–pipes, so there was no possibility of ground loops via that route, but Alex mentioned that the digital connection was unreliable so we filed that away for closer examination later. 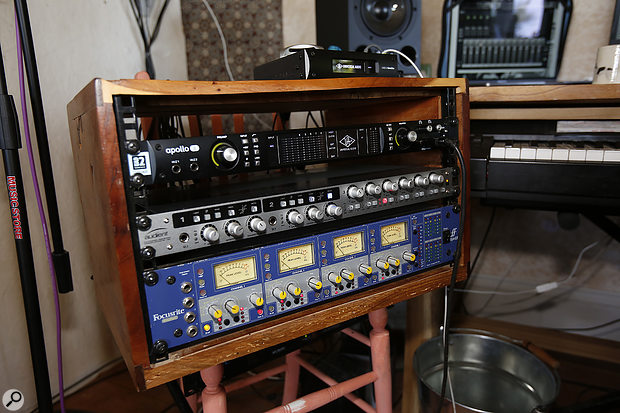 The hum presented itself any time Alex tried to use any of his microphones in any of his preamps.

The Focusrite ISA preamp was connected to the Apollo via four XLR-TRS cables linking its individual preamp outputs to four line inputs at the back of the Apollo. Although technically possible, it's relatively rare these days to suffer ground-loop problems when using balanced connections between equipment but, to make absolutely sure, we first disconnected the four balanced audio connections, and then disconnected the Focusrite's and Audient's IEC mains leads to break any potential ground-loop paths via their mains safety earths (in case loops existed via the equipment chassis and rack metalwork). None of these disconnections made any difference to the audible hum, so it clearly wasn't a problem with any ground loops within the equipment rack itself. Good news!

Preamps that use microphone input transformers — as the ISA428 does — can sometimes pick up mains hum from the stray magnetic fields emanating from power transformers in adjacent equipment, but Alex had already spaced the three preamps apart from each other in the rack, and switching off the Audient didn't appear to make any difference, so that was unlikely to be the source of the problem in this particular case.

Instead, it appeared to us that the unwanted hum was getting into the signal path somewhere between the mic itself and the Apollo's preamp, so we disconnected the mic cable going into the Apollo from the stage box, and plugged in a 'dummy source' instead, just so the preamp had a proper source termination. 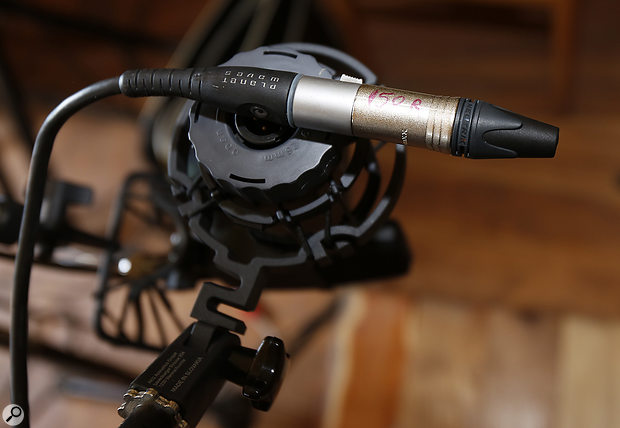 A 'dummy source' — an XLR shell with a 150Ω resistor wired between pins 2 and 3 — can be invaluable when trying to track down the source of stray hums and buzzes.

For anyone unfamiliar with the term, a 'dummy source' is very simple; it's just an XLR-3 male plug with a 150Ω resistor wired between pins 2 and 3 to simulate the source impedance of a standard microphone or other electronic output. The idea is that it acts as a 'silent' balanced input source which can be used in place of any kind of microphone or line-level equipment. As there is no ground connection it doesn't matter whether phantom power is present or not, and it's a very useful device to have in the 'box of bits'. 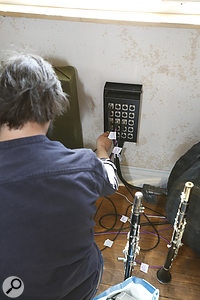 Being a new addition to the studio, the stage box was a prime suspect!Strictly speaking, we should have used the dummy source when we disconnected the speakers too, but (a) Paul unplugged things to eliminate other input sources before I'd retrieved the dummy source from my bag of useful bits, (b) I only had one dummy source plug to hand, and (c) it's less important when there is little gain in the signal path being tested. However, when testing a mic preamp with potentially 60dB or more of gain it is very helpful to terminate the input appropriately as this minimises noise and stops interference from getting in and confusing matters.

After connecting the dummy source in place of the stage box mic cable we listened to the output of the Apollo preamp and heard... a blissful silence! The problem clearly wasn't with the Apollo either, so we were making good progress! Next, we reconnected the cable from the stage box and moved the dummy source down to the stage box itself. This probably won't come as a surprise, but we were rewarded by the return of lots of hum, and the correct vocal response to such a finding is 'A-ha!'

Just to make sure we had found the right culprit, we disconnected the stage–box cable at the Apollo again and substituted an ordinary mic cable plugged into a capacitor mic at the far end of the studio. Again it was lovely and quiet, so the problem definitely involved the stage box or its cabling in some way — which makes sense given that it was the most recent addition to the studio setup.