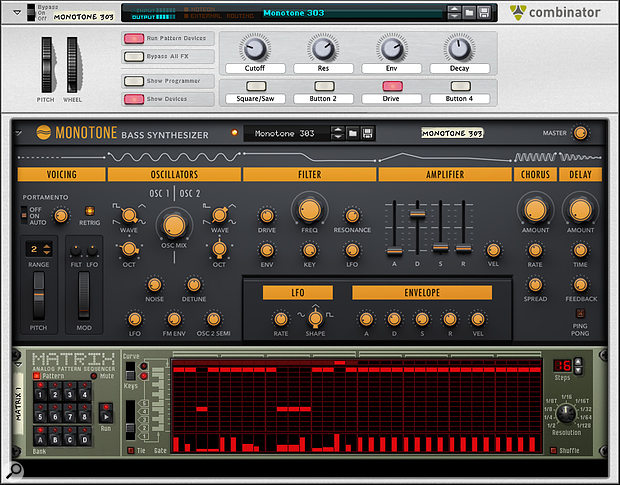 Screen 1. Free, oh free. Build your own Acid Bass Machine with a Monotone Synth and a Matrix step sequencer in a Combinator with custom controls.

We get to grips with Reason's versatile new monosynth.

Last month we started our look at the two new instruments in Reason 10.4 with the Rytmik drum machine. This time we turn our attention to the Monotone bass synth. Both the new devices are part of the Reason Compact 2 iOS app, and have been added to Reason so that song ideas you capture on your mobile device can be opened directly in the desktop app. But even if you're not interested in making music on your phone, Monotone in particular is a really nice little synth in its own right.

If you want a basic, classic synth in Reason, what do you use? In the olden days it was Subtractor, but that was built for the computing power of the year 2000, so I don't expect it to match the sound quality of modern synths. Reason's flagship synths are Thor and Europa, which are great, but they're pretty complex. There's a reason small hardware monosynths never go out of fashion: they're simple, fun and great for bass lines and melodic phrases. In the same way Monotone has become my go-to for a quick noodle in Reason.

Monotone follows a familiar two–oscillator, two–envelope, single–filter design. There are of course many small desktop synths and modules along these lines, but the feature set particularly reminds me of the original Novation Bass Station. I actually think Monotone sounds better than this classic, with great punch and a gloriously sticky filter. Its basic tonal character reminds me more of an ARP Odyssey.

The two main oscillators have four shapes: Saw, Pulse, Triangle and Sine. The only difference is that Osc 1's pulse is a regular square, while Osc 2's is asymmetrical. They have independent octave tuning, and Osc 2 can be offset in semitone steps. A detune knob provides that analogue fatness. The two oscillators are blended with the Osc Mix knob, and a noise source can be added in with the Noise knob below.

There's a nice bonus that extends Monotone's range courtesy of the FM Env knob. As far as I can tell (given that there's no documentation for Monotone yet), this modulates Osc 1 with Osc 2, with the FM amount modulated by the Envelope section. In typical bass patches with a snappy decay time (the Envelope is also used by the Filter) this adds some nice aggressive edge to the sound. With a slower envelope this can simulate a sync sweep, even though you can't independently modulate the oscillator pitches. As the FM is applied to Osc 1 you won't hear its effect if you have the Osc Mix fully set to Osc 2.

There's a reason small hardware monosynths never go out of fashion: they're simple, fun and great for bass lines and melodic phrases.

The Oscillator and noise mix routes directly into the filter, which has a rather pleasing overdrive attached. Keyboard note, LFO and Envelope mod are all available by degrees. Monotone has a single LFO and a modulation envelope which has a global velocity scale control. The VCA has its own envelope controlled from the sliders in the Amplifier section.

The Oscillators can also be modulated by LFO (but not Envelope). At a low level, with the sine or triangle setting, this can provide some nice vibrato or drift. The square wave can be used to create a simple two-note arpeggiator effect; settings of 44 and 66 percent on the Osc LFO amount will give you octave intervals.

Chorus and Delay effects are built in, providing sonic icing and some stereo width via the Chorus Spread and Delay Ping-Pong controls.

And that's most of the synth covered. Monotone is a great synth to learn about subtractive synthesis on. It's simple enough that you can explore a lot of sonic territory just with some random twiddling. But here are some ideas...

The patch in Screen 1 (above) emulates a 303-style bass. The Oscillators are set to square and saw, and to stay authentic to the original you'd only use one or the other at a time. The 303 has a fixed amp envelope (although it's different for accented notes). Having a little attack, say 10ms, on the filter envelope gives that nice squelchy response. This is emphasised across big note intervals by adding a little bit of portamento and setting the Filter Key mod to maximum. (For really good 303 you need Constant Time porta but it's not available here).

A little Noise and just a touch of filter drive help to dirty the sound a bit, but if you go overboard on the drive the Resonance will lose its whistle. Of course an Acid line usually benefits from some delay. To play with the sound tweak the Filter envelope and Envelope Decay time as well as the main filter and resonance controls. To get something like the 303 accent response the patch uses velocity sensitivity in the mod envelope. I've used this in the Matrix sequence by setting notes to either very low or very high velocity.

Monotone is not just about bass sounds. The patch in Screen 2 has more of a Boards Of Canada vibe. The higher sustain and longer decay times in the envelopes, combined with a dialled-back filter envelope amount, makes this a much mellower sound that can be used for melodies and pads. The lower Osc 1 saw gives a low growl which is tamed by the filter, and Osc 2 is tuned down five semitones to give that thick fifths sound.

It wouldn't be a Boards Of Canada patch without some detuning, and pitch mod from the LFO set to about 1.5Hz. Some filter drive and chorus make the sound warm and fuzzy, and I added a dollop of reverb in the mixer to serve.

The so-called 808 Bass is a cornerstone of a lot of music at the moment. It's simply a long, subby 808 kick sound pitched to create a bass line. Monotone can do a pretty great job of this. For the patch in Screen 3 I used the factory preset Klik Bass as the starting point. I've changed Osc 1 to Sine, and whacked the Amp Release and Filter Drive up. I also turned the Resonance up which somehow tames the harsh scratch from the FM sweep.

Screen 3. Contemporary 808 Bass sounds are no problem for Monotone.

With the basic patch set up you can experiment with the Filter Env and Envelope Decay to adjust the initial click to your taste.

Monotone is just asking to be combined with other Rack devices like Players and effects. It's probably time we revisited the whole topic of Combinators and how to set up custom controls. A great project is to take the 303 patch and turn it into a custom instrument, as I've done in picture 1. As well as adding a Matrix for sequencing, I've set up macros that limit the control range of some key parameters to operate within a 303-ish range. We'll take a deeper look at this process another time.