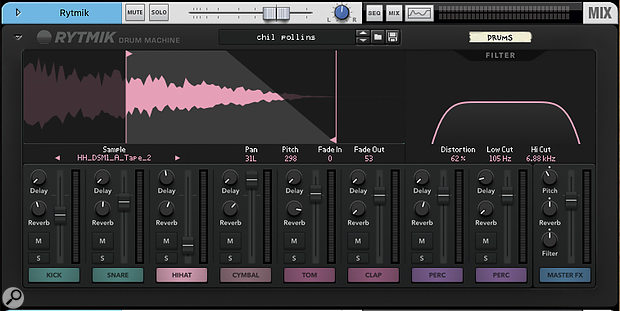 Screen 1. Rytmik is a simple drum machine with a fixed sample set, but its mixer-style layout makes it lots of fun to play with.

Reason 10.4 arrived in May with little fanfare, despite the inclusion of two new instruments! Rytmik is a simple, eight-track drum sampler, and Monotone is a bass synth. These are the same new instruments that have joined Europa in version 2 of the Reason Compact iOS app, and their primary purpose appears to be to let you open projects you've made on your phone or iPad in Reason desktop. However, they are really useful in their own right; Monotone in particular sounds fantastic with a gloriously 'sticky' filter. So far Propellerheads have not said much about them, and they're undocumented... so let's explore, starting with Rytmik.

Reason already has drum machine options and general purpose samplers, but there's something to be said for a straightforward, focused drum sampler with a built-in mixer and easy performance controls. Rytmik does not have its own sequencer, it's meant to be played via MIDI, or sequenced from gate sources in the Rack.

Rytmik's interface is pretty easy to understand, with a mixer-like layout along the lines of Roland's TR‑8S. The eight channels each have a volume fader, mute and solo buttons, and sends for Delay and Reverb. Clicking the pads along the bottom triggers the sounds and selects channels for editing in the top half of the panel.

Each channel plays a single sample, and here's the catch: the sample set is fixed, you can't import your own. Each channel does at least have access to all the samples in Rytmik's library so you can, say, load a hi-hat into the Kick channel (although the track name won't change).

When a channel is selected its sample is displayed in the edit area. You can adjust start and end times by dragging the markers within the waveform. All other settings are made from a narrow strip of simple parameter fields below. These include Pan, Pitch and Fade In and Out values that are set as a percentage of the current play range. These linear faders are the closest thing Rytmik has to envelopes.

Accessed from the right of the waveform display, each channel has a simple pair of filters which can be adjusted directly from the graph or from the numeric readout. The filter area also has a Distortion effect.

There's something to be said for a straightforward, focused drum sampler with a built-in mixer and easy performance controls.

The final channel, labelled Master FX, also serves as the master fader for the mixed output. Clicking on the channel selector for this track brings up an editor panel for the Delay, Reverb and master bus compressor. Again, settings are adjusted by clicking on the parameter values, and each section has a single parameter that can be controlled by clicking directly on the graphic display (delay feedback, reverb decay time and compressor threshold).

Screen 2. Rytmik has three built-in effects, plus a distortion and master filter.

For me it's the Master channel that makes Rytmik a fun device. The Reverb and Pitch knobs on the master act as trims for all channels. This can be used for fun breakdowns and transitions, like a lite version of the All control on some Elektron boxes. Turned to the left, the Reverb knob will attenuate the effect on the source channels, but to the right it will actually add reverb to all channels, even if their send is closed.

Finally, the master channel controls a filter which is applied to the mix bus. This follows the fun performance filter convention of low-pass to the left, high-pass to the right.

Rytmik has a comprehensive set of patch points on the rear panel, allowing for separate audio outputs, and external gating of all channels. These additions are particularly useful if you're developing an idea from Reason Compact 2. By taking individual outputs you can apply effects and mix the sounds individually in the main mixer. 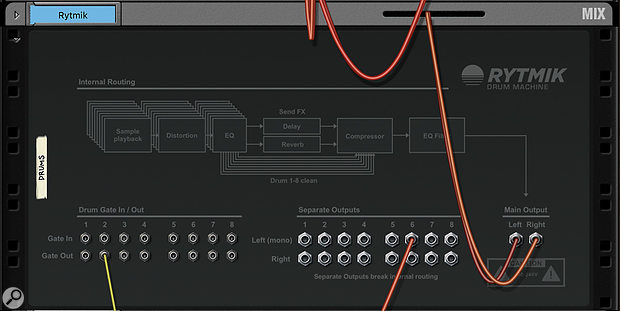 Screen 3. Patch points help with mixing and replacing sounds from your iOS projects.

The gate outputs are perfect if you want to replace some of the stock sounds you've used in a mobile app project, without spending ages completely swapping out the whole Rytmik with a different drum device. With the sequence already in place you can take the gate out from a specific channel to another device to replace or layer up a sound.

The info on the back of Rytmik states that using separate outputs breaks internal routing. In other words, if you connect an output channel it will no longer appear in Rytmik's own mix. Note, however, that the sends from a channel remain active so the sounds will still show up in the reverb and decay returns. In most circumstances you wouldn't want this, so you'd need to turn the sends down. The individual outputs also get affected by the master filter. 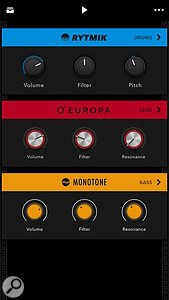 Screen 4. Reason Compact 2 now has three instruments in its mini-rack.

Screen 5. A Reason Compact 2 project opened in Reason has three instruments, with Europa's supported by Chords and Arp Players. If the project had a sequence it will appear as clips in the main Sequencer.The first mobile app to bear the Reason name was, well, a bit disappointing. It was essentially the Europa synth with a simple step sequencer. While Europa is of course amazing, and you could unlock a fair bit of programmability with an in-app purchase, it was a bit of a stretch to call it Reason, even with the 'Compact' qualifier.

Version 2 offers a lot more, with drum and bass tracks provided by the Rytmik and Monotone devices. There's still only one sequence (up to eight bars) in a project, so you can only really capture a single idea, but it's fun and you can develop these on-the-go doodles in Reason proper.

To export a Reason Compact 2 project to Reason, navigate up to the main screen that shows the mini rack. Tap on the menu in the top right and choose Export. Tap on 'Reason 10' and the standard iOS share screen will pop-up. If you're on a Mac you can simply AirDrop to your computer, but you can also send as a message or email, or save to your cloud storage service of choice.