You can get the amp and stomp-box collection you've always wanted now that Logic offers Pedalboard and Amp Designer.

Traditionally, the world of computer‑based recording has been inhabited by geeks rather than the archetypal axe-wielding guitar hero. Logic Pro's initial foray into fret‑based processing, Guitar Amp Pro, was a rather lacklustre affair and can't have brought many guitarists on board Apple's flagship DAW. However, the company obviously believe that there's a whole world of fret‑fiddlers out there who could benefit from using Logic Pro. So, with version 9, they introduced two major new plug‑ins aimed directly at guitarists: Amp Designer and Pedalboard.

Amp Designer really does do what it says on the tin. Not only can you select several model types — which are based on a wide historical selection of successful guitar amplifiers — but you can also edit the amp and speaker, thus creating models that have never existed in the real world. At the end of the chain, there's a virtual ribbon, dynamic or condenser microphone whose position in front of the virtual speaker cone can be adjusted. However, the most important improvement over earlier incarnations of guitar processing in Logic Pro is the sound. The amplifier simulations are excellent and, in my opinion, comparable with the best from the likes of Line 6 or Native Instruments. Pedalboard isn't that hard to grasp, either, allowing virtual guitar effects to be assembled onto a virtual pedalboard. It's like having Pete Cornish inside your Mac!

Set Up For Success

The first thing you need to be aware of is that you can't just connect a guitar to a line input jack or microphone XLR on your audio interface. Guitars need a high‑impedance input (sometimes labelled 'Instrument'), and failure to use one is often the reason why people complain that their DAW‑based guitar simulations sound weedy or thin. If you don't have the correct type of input, you'll need to use a suitable preamp or a DI box designed for use with guitars.

Playing a guitar live through Logic Pro (or any DAW) also immediately raises the thorny issue of latency. Inserting Pedalboard and Amp Designer on an audio track introduces an audible delay between the plucked string and the processed sound, so you'll need to get this delay as small as possible, by reducing the buffer size in the Audio Preferences window. A value of 64 or 128 should be perfectly acceptable, while values of 256 or higher might be usable if you're playing Durutti Column covers.

Logic Pro will only record the raw, unaffected guitar sound on the track to which the guitar is routed and, while this allows you to re‑process the sound during mixing, guitarists often like to permanently 'print' effects and amp sounds when recording. You can simulate this technique by right‑ or Ctrl‑clicking on the region after recording and selecting Bounce In Place, making sure that Destination is set to 'New Track' and Source is set to 'Mute'.

An advantage of working in this way is that the original, unprocessed guitar recording will be retained, so you can easily set up a simulated double‑tracking effect by copying this unprocessed region to a new track, adding some new amp and pedalboard effects and setting a delay value in the new track's Inspector column. Panning this track hard left and the 'printed' region hard right creates a passable imitation of two different guitars with a widened stereo image.

The controls on the amps are pretty simple and include very basic tone knobs. This may beg the question as to why anyone would bother using these simple bass, mid and treble EQs when Logic Pro has much more sophisticated frequency shaping on board. Amp Designer's tone controls — just like ones on the amps they model — have been created to provide control over the most useful guitar‑friendly frequencies. Like many modelled EQs, they are designed to have a specific 'sound', which is obviously also an essential part of the original amplifier's appeal. The reverbs on the amps are often based on spring types, while the modelled tremolo and vibrato have been designed, tonally, to specifically suit the associated virtual amp circuitry.

Unlike the originals, Amp Designer's modulations can be synchronised to Logic Pro's tempo. However, for the ultimate in emulation, it might be better to set these by feel and ear. Pedalboard's time and modulation controls can also be made to follow the beat of Logic Pro's drum, but the same caveat applies as for the amps, though echo can often benefit from being more closely tied to tempo. Pedalboard's controls will also be familiar to anyone who has even a passing relationship with the real thing and, visually, they are a something of a psychedelic smorgasbord. Pedals are dragged to the virtual board from the browser box on the right, and their physical arrangement can be adjusted by simply dragging with the mouse. The signal path is revealed by opening up the virtual 'lid', and it can be re-patched in the same way. Pedalboard has two virtual buses, so effects can be inserted serially or in parallel by dragging the relevant boxes.

You can view the signal path of the virtual pedalboard by lifting a virtual 'lid', and re‑patch by clicking and dragging.

Clicking on the little arrow at the bottom left of the Pedalboard window reveals the MIDI Controller assignment window. Setting MIDI control of the pedal's parameters is initially a bit confusing, as the basic setup is performed in Logic Pro itself, rather than in the Pedalboard window:

1. To assign the Rate and Depth controls of the Retro Chorus (for example), select Auto Assign and click the Rate control. This will be assigned to the 'Macro A Target' field.

3. Close the Controller Assignments window and you should then find that the Rate knob on the Chorus turns in tandem with the hardware control.

4. Repeat this for all the Macro Targets you wish to assign to hardware MIDI controllers. Mappings are saved with Pedalboard settings. 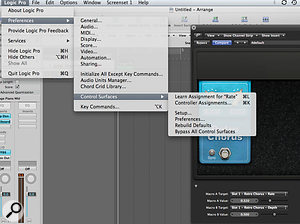 If you'd like a taste of real speakers moving air, you don't need to do your entire guitar processing completely within Logic Pro. I have a really nice Crate V5 five‑watt valve guitar amp, but no pedal effects to drop in front of it, so I use Pedalboard when the raw guitar sound isn't enough. Logic Pro's I/O plug‑in (found in the Utility menu) allows you to send audio through one of your interface's output jacks and then on to an amp, but you could also send the channel strip's audio directly to the same output. If you use the I/O plug‑in, make sure the channel output is set to 'No Output'.

After the sound is adjusted to taste, a microphone can be used to record the sound back onto a new track. I've found that Amp Designer's microphone placement feature is a brilliant teaching aid and, if you're inexperienced with recording guitar amps, you can use the plug‑in to give you some pointers on how the different models and positions will affect the sound — although, of course, you won't actually be using the modelled amps themselves if you're using a real amp. 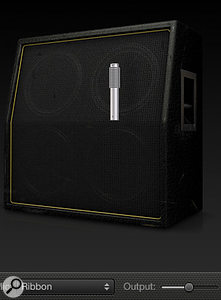 Amp Designer features adjustable microphone placement, which actually acts as an excellent teaching aid, if you're unfamiliar with amp recording.

There'll be some latency induced by sending out audio to the amp but, again, this isn't too much of an issue with a low buffer setting and when using very processed guitar sounds. If it does sound out of time, recording the unprocessed guitar from the input channel strip along with the miked‑up guitar will generate a nice visual aid if you zoom in on the waveforms. Logic Pro's many nudge key-commands can then be used to bring the processed guitar back into line.

While the guitar‑based effects in Logic Pro 9 sound excellent when used with their intended source, they are also fabulous on other instruments. I particularly like the EVP 88 electric piano through some of the Tweed simulations, while the L100 EVB3 organs through the distortion, wah and echo are instant Dave ('not Eurhythmics') Stewart. Because you can use MIDI controllers to control your virtual knobs, guitarists should easily be able to obtain the tactile, real‑time interface they are used to. For the rest of us, the guitar‑based effects open up a world of noise, grit and grunge often missing from purely electronic music.