This month we take a stroll throught the Mac audio editor market and pick up a few bargains along the way. 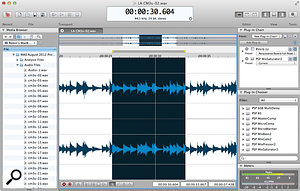 Sony's previously PC-only Sound Forge is now on the Mac.

Although the long-established BIAS Peak is no more, the Mac audio editor market is positively thriving. There's more choice than ever before, at a range of prices, spanning everything from quick file trimmers to mastering-grade monsters. Here's an in-depth look at new-to-Mac options, and a quick round-up of the other main contenders.

Sony Sound Forge Pro: One of the more expensive audio editors out there, Sound Forge arrives on the Mac with a formidable reputation earned in its PC-based incarnation. It also sports a fair number of state-of-the-art features: a cool, configurable user interface, a mastering plug-in suite from Izotope, and their impeccable sample-rate conversion and MBIT+ bit-depth-reduction algorithms too. Time-stretch and pitch-shift is done with Zplane's Élastique Pro plug-in, and for restoration work Izotope feature once more, with a Declicker, Declipper and Denoiser presumably derived from their RX suite. Any other VST or AU-format plug-ins can be used too. On the down side, at present, the Mac version of Sound Forge Pro currently has no CD mastering or burning facilities at all, and likewise lacks its PC counterpart's batch-processing features. If you don't need those, though, there's much to recommend it. Sound Forge Pro costs from £166.95$270. For more information go to www.sonycreativesoftware.com/soundforgepromac. Expect an SOS review soon.

Audiofile Engineering Triumph: Audiofile Engineering's Wave Editor attracted a loyal following over the years, and Triumph is its updated, extensively reworked and distinctly friendlier replacement. The new app is all clarity and immediacy: timeline events and fades are placed via drag-and-drop; you can specify your own keyboard shortcuts for every command; and going hand-in-hand with a clear single window design and full screen support are multiple tabbed workspaces. But there's power under the bonnet too, with the same Izotope sample-rate conversion and dither offered by Sound Forge, as well as superb CD burning support and DDP (Disc Description Protocol) export and import. All that plus VST/AU plug-in hosting makes Triumph a mastering platform to be reckoned with, at an absurdly low asking price. It'll be available for $79.99 from www.audiofile-engineering.com and the App Store.

Rogue Amoeba Fission 2: A rather different beast to Sound Forge Pro and Triumph, version 2 of Fission retains what is probably a unique capability: it can edit MP3, AAC and Apple Lossless files natively, without having to transcode them first and re-encode them afterwards, and thereby avoids any cumulative quality loss. It's also got great batch-conversion features, can create Chapterized AAC files (for podcasts and audio books) and iPhone ringtones, and can publish direct to SoundCloud. It's quick and easy to use, but with no disc burning or plug-in support. Go to the App Store or www.rogueamoeba.com where it costs £22.49$32. 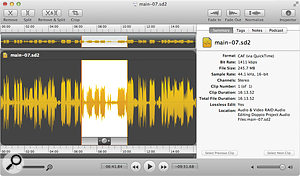 This little app is worth having having around even if you own another, more heavyweight audio editor.

There's a trio of likeable, affordable, modern audio editors that all look and feel quite similar. Amadeus Pro (£39.99$59.99, www.hairersoft.com) has multitrack and multi-channel support, CD burning, VST/AU support, off-line processes including de-noising, click and gap repair, batch conversion, and excellent analysis tools. TwistedWave ($79.90£54.99, www.twistedwave.com) lacks CD burning but offers good-quality time-stretch and pitch-shift. A far cheaper cut-down iOS version is available too, and there's even an experimental online browser-driven version. Finally, you might check out Sound Studio 4 ($29.99£20.99, www.felttip.com), which can't burn CDs either but is still multitrack-capable, and is considerably cheaper, of course.

Step up a little in complexity and you get to DSP Quattro 4 ($99€79, with cut-price crossgrade options, from www.dsp-quattro.com). This is a notably flexible, heavyweight audio editor that offers AU and VST hosting (including virtual instruments), safe 'triple-buffered' direct audio recording, high-quality sample-rate conversion and dither, restoration tools, and CD burning. Like Triumph it also has DDP export and import for mastering.

Finally, don't rule out the open-source Audacity (http://audacity.sourceforge.net). Still free, it has more going for it than ever before, including vocal reduction and noise reduction tools, and the mesmeric 'extreme time-stretch' algorithm Paulstretch.