We root out a little-known hard-disk hog and tell you why musicians shouldn't rush to upgrade to iOS 7.

The release of iOS 7 happened as expected on September 18th, delivering on the clean visual design that Apple trumpeted in their June WWDC keynote.

Sadly though — and in a depressingly familiar echo of OS X update practice — the very first release version, 7.0, causes instability in a number of music apps, particularly when used in conjunction with Audiobus. Things will work out in time, no doubt, but right now the only really safe bet is to stick with iOS 6 for a while longer.

Meanwhile, back on the cutting edge, some more information is starting to emerge about iOS 7's inter-app audio feature, with a few apps, like Yamaha's TNRi v1.5, already supporting it. It's a system-level mechanism that lets the audio output of one app appear as an input in another for recording or processing. It'll also launch apps when necessary, apparently. All very Audiobus-like, for sure, but the difference is that there's no 'front end', with all settings taking place in the individual apps themselves. I'm not sure anyone has used it in anger yet, but it's bound to become an important feature. More news here on all things iOS 7 as it comes in...

Have you heard of your Mac's 'sleepimage' file? I hadn't until a few weeks back, when I was using the third-party disk-scanning utility DaisyDisk to help me free up some space on my solid-state system drive. It revealed the mysterious 17GB chunk in a part of OS X usually hidden from view. 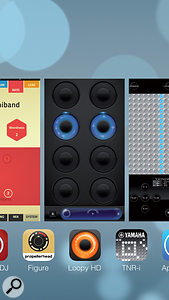 The lovely new full-screen app switcher in iOS 7. But for the time being iOS-based musicians will be better off staying with iOS 6. The sleepimage is part of Apple's 'safe sleep' feature which dates back to 2005 and OS 10.4, but in fact it's only created by default on Mac laptops. It's essentially a dump of your RAM contents, written as the Mac goes to sleep, or when battery power gets very low, preventing any unsaved work being lost in the event of total battery depletion. When you restart the Mac the sleepimage is read back from disk and you carry on where you left off.

Put like this, what's not to like? Answer: some unforeseen drawbacks. As I discovered, that sleepimage memory dump can be a disk storage hog, grabbing at least as much space as you have physical RAM, and without asking too! In my case the 17GB sleepimage (generated from my 16GB RAM) was using up a whopping 14 percent of my 240GB SSD system drive. Next, the dump process can make putting your Mac to sleep really slow. It'd be particularly bad if you had a lot of RAM and a conventional mechanical hard drive; sleep could take literally minutes to happen. And that is potentially dangerous if you put your Mac laptop to sleep by closing the lid, before immediately chucking it in a shoulder bag and legging it out of the house... You wouldn't know it, but your system drive could easily be spinning, and writing, as you jog along. With a solid-state drive there's not the same risk of data loss through physical damage, but this sort of large data-write operation, repeated day after day, will degrade an SSD over time. 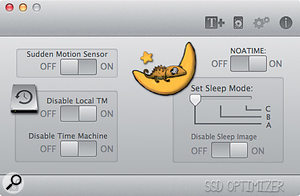 The irony in all this is that if you're reasonably attentive you'll probably never need safe sleep anyway. Save your work when your MacBook flashes up a low battery warning and you're safe. Even if the Mac finally powers down, you still have a grace period — usually several hours— in which the RAM continues to be powered and your memory contents remain intact. Just plug into the mains as soon as you can. In my situation the reclaimed 17GB disk space and instant sleep behaviour would far outweigh the safe sleep benefits.

So how do you zap that sleepimage, and prevent it from appearing again? Well, UNIX nerds can use Terminal commands. But much nicer for most of us is the donationware utility Chameleon SSD Optimizer from http://chameleon.alessandroboschini.it. This great little app gives you everything you'll need, including a useful on-board help/info page, and despite the name it'll work for mechanical drives too (although many features will be redundant). Do back up before letting loose with it, though.

Here's one last thing. A corrupted sleepimage is often the culprit on Macs that won't wake, or that hang shortly after waking. So even if you decide not to disable safe sleep completely, deleting the damaged sleepimage will often cure all your problems. And have no fear, a nice new one will be generated the very next time your Mac hits the pillow.