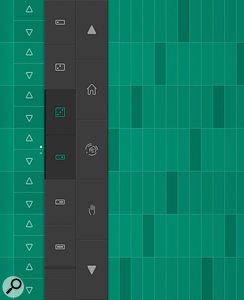 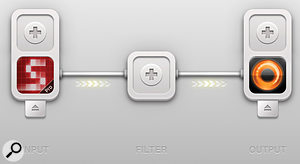 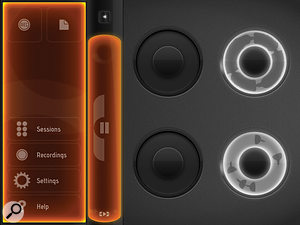 The future is here! Or at least some of it. In beta. You know how keen we are here at Apple Notes HQ to let you know what's in the pipeline? Well, this month it's all about pipelines! The potentials created by Apple's hardware and software developments are being realised to the benefit of musicians, and all that thinking is being, literally, joined up.

With iOS apps being self-contained and iPads and iPhones being designed to be personal devices, the idea so far has been that you work one app at a time, and you work on your own. You can switch between apps, but getting apps to talk to each other, though possible, is frustrating. Some efforts to make apps talk to each other have been made, but virtual MIDI has been implemented differently from one app to another, and I think these problems undermine the convenience of an app and why we use them in the first place!

I have reported previously on Sonoma Wireworks, who created a protocol that implements the clipboard in apps like StudioTrack, and AudioCopy and AudioPaste has been implemented in a wide range of apps, but copying and pasting from one app to another relies on the two projects being at exactly the same tempo. Whatever any iPad advocate tells you about creating new ideas when you're forced to work in different ways to those that you prefer, these problems can certainly hinder your workflow.

So what if you could just connect one app to another with a virtual cable? This idea's been around for quite a while on the Mac with Cycling '74's SoundFlower, but now the clever chaps at www.audiob.us have come up with an iOS equivalent which they call — yes — Audiobus. In the beta stage at the time of writing, the protocol requires apps to be Audiobus compliant, and at this point there are only two apps that fit the bill: Loopy HD by A Tasty Pixel and SoundPrism Pro by Audanika. Both apps are already established as favourites with iOS musicians, and are shining examples of how a touchscreen interface can be exploited to make music in intriguing and inspiring ways. But there are most definitely more in the pipeline. Audiobus is itself an app that allows you to choose an app as the input, passing live audio from that app to an app chosen as the output. Apps can be on the same device or different devices and Audiobus itself can be on any device, as long as they are all in the same Wi-Fi network. When I saw this working for the first time, I was impressed by how easy it was to set up, but it is the flexibility that gives rise to a multitude of possible collaborative opportunities.

Choosing SoundPrism Pro as the input and Loopy HD as the output in Audiobus, I was able to record the live audio output of the former into the latter, with the apps running on the same device as well as on different devices. Impressively, audio is captured in perfect sync, as Audiobus has a clever buffering system that passes the time-stamped audio to the output app in sync, whatever fluctuations take place in the wireless bandwidth. All apps running on any devices in the network are currently recognised, so I can imagine some confusion when multiple devices are being deployed, but if an appropriate interface is designed to cope with this, that issue could be resolved.

There is already provision for the user to insert an app in the signal path to perform filtering or other such manipulation in real time. The possibilities for live performance and capture of that performance are limitless, but, like all good protocols, its success will be driven by how many developers come on board and add Audiobus compatibility to their apps. Ideally, the big boys will also want a slice of the action: just imagine GarageBand for iOS capturing live output from your favourite synth apps. Finally, the iPad band looks like a reality!