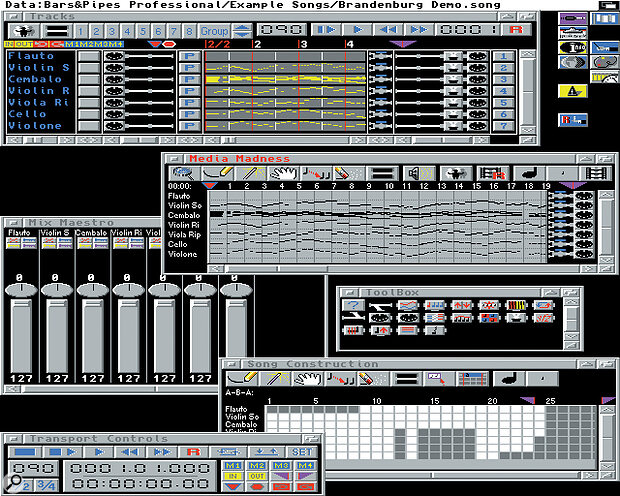 Being more of a muso than a multimedia person, I must admit to being slightly hesitant about the direction of the latest release. With the program's expansion into multimedia, I was a little worried that its musical prowess would be put on the back burner in favour of yet more whistles and bells. Thankfully, the reverse has happened, and in fact nearly all the new features concentrate exclusively on the musical side of the software. Unfortunately, due to the huge number of changes, it's only possible to spotlight the very latest additions.

For anyone working commercially, time is definitely money. As a result, the arrival of simultaneous looping across all tracks has to be one of the highlights. Better still, thanks to the variety of track styles on Bars&Pipes Professional 2.5, it's even possible to record over a looping section. In reality, this is done by the addition of a linear track, which then plays in concert with the looping section.

For those unfamiliar with the program, Bars&Pipes Professional 2.5 offers three track formats; basic song tracks, linear tracks — which don't loop — and finally real‑time tracks. The difference between them is that both song and linear tracks respond to tempo changes, while real‑time tracks use absolute timing, always trigger at the same instant regardless of tempo alterations, and are ideal for adding sound effects to video productions. Whilst on the subject of video, the program's SMPTE handling has also been improved, thanks to automatic formatting. The Patch List has been enlarged, too, and alphabeticising has been added to the ToolBox — at last.

More hotkey commands are available in menu selections — all of which comply with the Amiga's intuition style guide. The double‑width, double‑height screen display has also been improved. In the new version, hotkey commands allow you to jump between the four screen areas, thereby avoiding the annoying screen dragging associated with its predecessor.

In the past, cutting, pasting and merging tracks wasn't exactly tricky, but now it's child's play, thanks to a collection of menu options which allow a single command to do all the hard work. A classic example is the new tool replication feature, which automatically copies a tool from one track to all the others. The reverse action is also available, with instant removal across individual tracks, a group or even the entire song. Another master stroke is the implementation of automated track splitting. Now, a single menu selection will split the track you're working on into separate tracks for every note at a specific pitch. Dividing a drum track, for example, is now simplicity itself.

Individual track editing has also been enhanced; you can now audition edits in concert with the rest of the production. No longer are you forced to update or close down the edit screen in order to test the changes. On a slightly less monumental scale, it's now possible to terminate track playback, mix clips from the right edit flag and scroll the display using arrow keys.

Step entry has also improved fairly dramatically, courtesy of the space bar. To extend a selected note, you simply tap the space bar and the note grows accordingly. Another much‑needed add‑on is the ability to cancel mouse‑driven edits by simply clicking the right mouse button — at which point everything snaps back into its original form. Lyrics can now be put in with syllable dividers, even across an entire measure or section. Autoranging has been added as an option, and now, when you open a edit window, the notes are automatically displayed — working from the lowest upwards.

As in the track window, flag editing has been enhanced. A shift‑click on a flag immediately invokes the bounds window, ready for numeric input. Some of the features already mentioned have also transplanted themselves into Song Construction, with the same ability to cancel edits using the right‑hand mouse button, plus much improved Bounding Box operations — which in the past tended to be a little vague.

Printing is a notoriously tricky business on most sequencers, and Bars&PipesPro has had its fair share of hard‑copy problems. Fortunately, Blue Ribbon have now addressed the problem, with a few much‑needed improvements. Arguably the most important aspect is the arrival of optional ledger lines below the Treble Clef or above the Bass Clef. In addition, you can now precisely set the number of measures per line, and the number of staves per page. Furthermore, a larger range of print resolutions has also been included. You can now be sure that both songs and groups will fill the entire page prior to a page break. Add to that the ability to print guitar tablature alongside your staves, and the hard‑copy equation is complete. 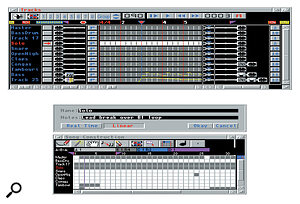 Although often overlooked, the program's ability to add new features via the accessory window is a key factor in its success. Like the rest of the system, this has also enjoyed a little attention in the form of the new Logical accessory. Basically, this brings boolean operations into a MIDI environment. Although usually associated with 3D modelling and mathematics, boolean operations offer a range of cutting and combining functions which, as far as I'm aware, are unique to Bars&Pipes Professional 2.5. The options on offer are as follows: 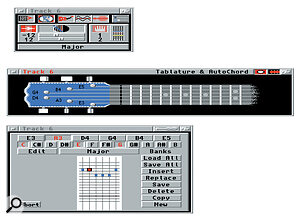 Due to the space limitations inherent in having only two pages, it's only really possible to scratch the surface of the entire program. However, I hope this brief list of enhancements provides a taste of the power this truly spectacular product can provide. Version 2.5 simply keeps up the Blue Ribbon record of excellence, and reaffirms this program's position as the Amiga's ultimate MIDI/multimedia sequencer.

Bars&Pipes Professional 2.5 is a modular beast, with each window triggered by its own icon. Here's a whistle stop tour of all the available edit and control screens.