A Beginner’s Guide To Brass

Adding A Horn Section To Your Arrangements By Dave Gale 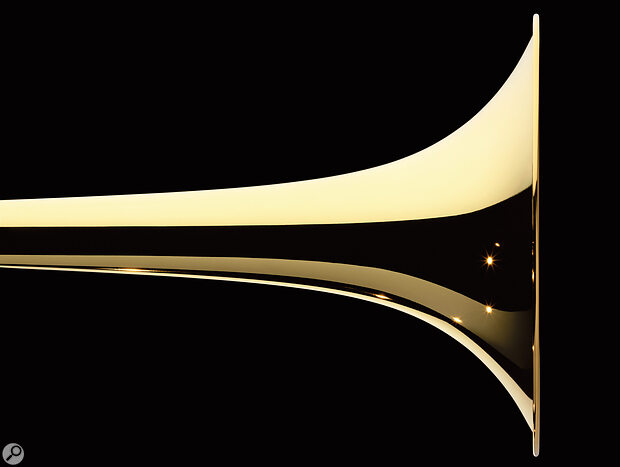 Adding a horn section to your productions can bring everything from mellow melancholy to verve and excitement.

If I’m truly honest, I owe much of my musical upbringing to the fact that I just happened to pick up a musical instrument, when I was aged around nine years old, that not only resonated with me but offered an enormous wealth of musical opportunity. Growing up in South London, the long defunct Inner London Education Authority (ILEA) provided an absolute cornucopia of musical opportunity, for any ILEA pupil. All pupils were offered free weekly instrumental lessons along with the free use of an instrument. It sounds like an outlandish concept in these cash‑strapped times but, thankfully for me, that instrument was the trombone.

I’ve long suspected that musical instruments choose their players, explaining why some musicians reach dizzying heights while others struggle with the basics, and talking of basics, the trombone benefits from a bizarre playing concept. It emanates from the brass family and, in common with other brass instruments, is a relatively physical instrument to play. The guiding principle involves placing what could be regarded as a long piece of plumbing up to your mouth, and buzzing down it, via a conical device known as a mouthpiece. Somewhat odd, most would agree, at least outside of musical constraints, but it does mean that it’s the individual behind the genesis of note production.

To add further to the circus‑based amusement, the trombone is equipped with a contraption called a slide, which goes up and down, often as the clown in the middle of the circus ring has some degree of comedic misfortune! Thankfully, though, and placing circus antics to one side, the trombone is capable of far more than pure theatrics. It resides in numerous musical brackets, from small classical groups to full orchestral settings; from jazz and funk bands to slick pop outfits. I clearly got very lucky, making the absolute most of every musical setting I could muster.

There was, though, one scenario that captured my imagination, and still works me to a frenzy of excitement even now. The Horn Section is the generic term applied to the group of players, working as a section within a band, group or production. The term ‘horn’ in this context applies to trumpets, trombones and saxophones, or derivatives of those instruments. It confusingly has nothing to do with French horns, and certainly nothing to do with the Taskmaster sidekick, Alex Horne, and his fantastically eccentric troupe, ‘The Horne Section.’ (Note spelling!)

It does however have everything to do with the ability to create a beautiful sonic layer of colour for a ballad or slow song, or supply extreme excitement to push a song over the cliff, with builds of volume and energy.

Can you imagine a Blues Brothers rendition of ‘Everybody Needs Somebody’ without the excitement of the main horn riff? Or Stevie Wonder’s ‘Sir Duke’, without that fantastic hook at the front of the song? In fact, there was a time back in the ’70s and ’80s when horn sections were so dominant, it was almost a prerequisite to use them. Michael Jackson, Earth Wind & Fire, Steely Dan, all made extensive use of horns, making them more noticeable by their absence! This tradition was largely informed by the jazz era, and as that jazz influence infiltrated the funk scene in the ’70s, so horns followed, bringing all that majesty and colour to commercial music.

In most horn section scenarios, the magic number of players is three.

There’s no getting away from the fact that horn sections can be an expensive luxury. Unlike harmony based instruments, such as keyboards and guitars, horns only play one note at a time. There is a technique known as multi‑phonics, but that’s not going to help you in any of the more usual settings. Neither is the once fashionable concept of playing two saxophones simultaneously (listen to the sax solo on the Blockhead’s classic, ‘Hit Me With Your Rhythm Stick’ for evidence of that!).

In most horn section scenarios, the magic number of players is three. This has everything to do with the fact that triads are three‑note chords, and while extended chords such as 7ths contain four or more notes, you can leave certain notes out, within a chord shape or voicing, and the effect can actually be heightened without any hint of missing those extra notes.

This rather begs the question, which lucky three horn players you might employ? It’s often down to personal taste, but the most commonplace ideal is a trumpet, an alto saxophone and a tenor trombone. All three instruments adopt slightly different registers; the trumpet can play relatively high, sounding incredibly exciting when it does. It’s also a brass...