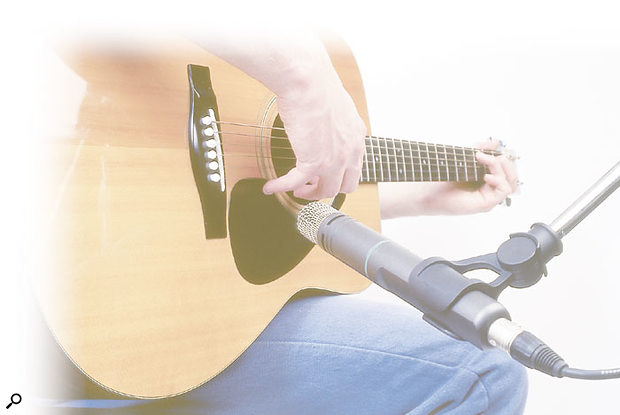 We look at how you can mock up a live acoustic guitar sound from a DI'd recording, using Logic's built-in plug-ins.

Recording the acoustic guitar is much the same regardless of the recording hardware or software being used, but Logic has a number of plug-ins that are well suited to creating both contemporary and more traditional acoustic guitar sounds at the mixing stage. There's also a new plug-in in Logic Pro 7 called Match EQ, and, as I'll show later, this may sometimes be effective in improving the sound of those guitars fitted with piezo electric bridge pickups. Don't forget that if you have one of those rare passive piezo pickup systems, you need to DI it using an active DI box or other device with a very high input impedance. Guitars will in-built preamps can be DI'd directly via a line input of your audio interface.

Life is easier from a technical standpoint if you DI the guitar via an inbuilt pickup system insomuch as you don't have to worry too much about noise pickup from the computer or from other instruments, but in my experience, the output of a piezo bridge pickup takes a lot of processing to get it to sound anywhere near right. Systems that combine pickups and mics, such as the Fishman Rare Earth system, fare rather better, but if you want to capture the real acoustic sound of a great instrument, there's no better option than to mic it using a decent capacitor microphone. However, if DI'ing is your only practical option, then what can Logic do to help you get somewhere close?

This brings me back to Match EQ, which provides a more or less automatic way to EQ one sound to make it sound more like another. Match EQ uses a very large number of EQ bands and starts by analysing a reference sound (the sound you wish to emulate), which in my experiment was a short section of the acoustic guitar recorded using a microphone. It could also be an excerpt of solo acoustic guitar imported from CD if you have something you like the sound of. In Logic parlance, this reference audio is referred to as the template material. Match EQ is simply dropped into an insert point, and in this example, I found it convenient to record my section of reference guitar on the rhythm guitar track before the actual start of the song. 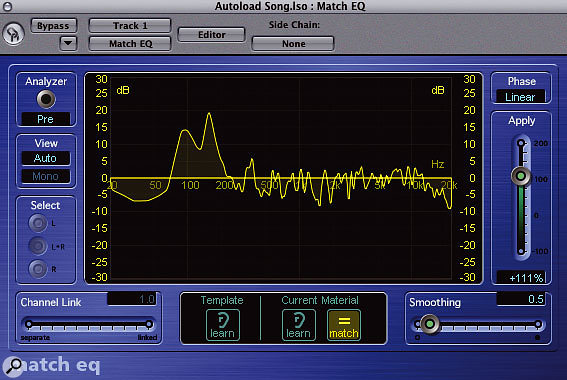 For the main part of the guitar track, I set the EQ on my acoustic guitar pickup system to flat and recorded a couple of minutes of playing. Pressing the Analyse Template button on Match EQ while the reference section was playing back stored an EQ curve, after which I moved the cursor to the DI'd guitar part, resumed playback and pressed the Analyse Current button. This stores a second curve, then when you hit the Match button a correction curve is computed to make the Current sound spectrally similar to the Template. Note that you may not hear the audio play back while a file is being analysed but you'll see the frequency curve build up in the plug-in window.

There's a fader that allows you to apply more or less of the correction curve, even going beyond 100 percent, and there's also a slider to smooth the EQ curve being applied — something best judged by ear. A further button provides a choice of linear or minimum phase EQ and again the sound is slightly different so you need to listen and choose the nicest-sounding one. If you feel unsure of these controls, simply stick with the defaults, as they usually do a pretty good job.

In my test, the general sound of the guitar after processing via Match EQ was very much closer to that of my referenced miked recording, even though the unprocessed sounds were hugely different. However, you can tweak the final sound further by creating EQ curves by dragging up or down in the Match EQ window, and if this doesn't work out, you can restore the original curve by following the prompt at the bottom of the plug-in window. Match EQ takes a fair amount of processing power and also introduces a little processing delay, so you may wish to use the track Freeze button once you have got the sound you want. 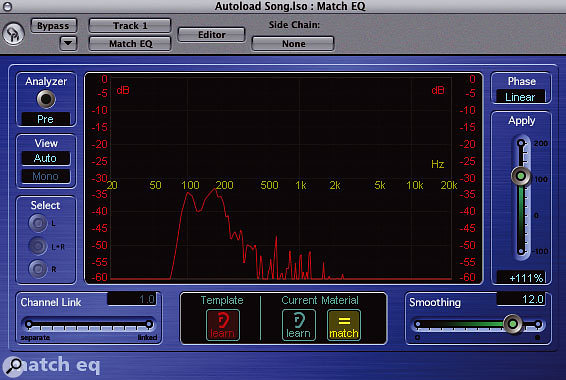 The EQ curves for the original DI'd recording.

Using this method, you may get an even better match if you use the guitar's own EQ system to get the pickup sounding as close to the miked sound as possible, but an exact replication of the miked sound is unlikely with a piezo pickup system, as the attack dynamics of the notes seem a little different and can give the sound a slightly 'scratchy' character. Interestingly, I repeated this experiment using the piezo bridge pickup on my Parker Fly electric guitar, and though I've never been a great fan of the sound, doing the Match EQ trick probably brought it as close to the original acoustic sound as I got by processing my DI'd acoustic in the same way. As an afterthought, I tried the same process using the single-coil pickup position and got a surprisingly musical result — and without the scratchiness of a piezo pickup. 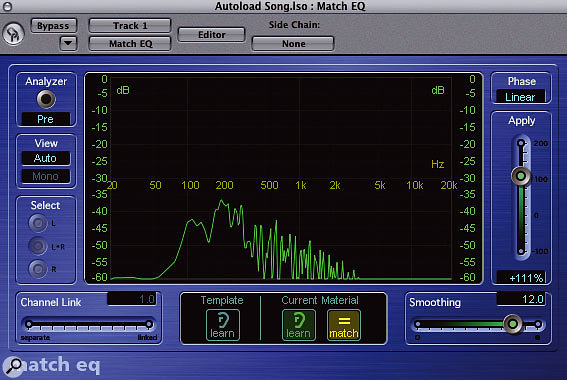 The EQ curves for the reference recording.

The rest of the processing, again applied using only Logic's plug-ins, is relevant to both DI'd and miked guitars. For this project, gentle compression was used to even up the sound (you can see the settings I used in the screen shot) and I also used Logic 's Exciter to add in a little high-end zing to the sound. It's best to set the Exciter frequency control to around 3kHz or above in this application, which prevents harmonics being added to the upper mid-range where harshness can be a problem. By restricting the added harmonics to the top of the audio range, you get a nice open, airy sound that isn't too aggressive.

The final touch was to add a hint of reverb, and though there are some great-sounding rooms in Space Designer, I found that a short, bright reverb cooked up in Platinumverb added the right amount of space without getting in the way. Again you can see the settings in the screen shot. Where the guitar is required to sit in a pop mix rather than being the featured instrument, it may also help to pull out some low end using Logic's high-pass or low-cut filters, though you can also reduce the bottom end in Match EQ by dragging the curve downwards to around 200-300Hz.

The rest of the processing chain — using only built-in Logic plug-ins.

Although you can use more sophisticated plug-ins or external modelling preamps, Logic provides a great basic set of tools for recording the acoustic guitar either with a microphone or by DI'ing. It even includes a very accurate guitar tuner plug-in! Match EQ is a great help in trying to get the DI'd sound somewhere close to the miked sound, and Logic's compressor is smooth enough to use with acoustic guitar as long as you don't apply too much of it, in which case level pumping may be noticed. You can put the compressor before or after the equaliser, but in this case I felt the subjective result was best by compressing after the EQ, as this helped tame any harsh peaks occurring at specific frequencies.

Acoustic guitar doesn't normally need a lot of reverb to make it sit well in the mix, and in most cases Platinumverb does the trick nicely, though Space Designer is a better option for more featured parts. The fact that these processing tricks also worked well on my electric guitar with a piezo bridge pickup is a bonus.

If you're recording using a microphone, I can't stress too highly that stock mic positions don't often cut it unless you fine-tune them. Use them as a starting point by all means, but monitor the sound through headphones while moving the mic (or if you're also playing, while shifting the position of the guitar) until you pinpoint that all-important sweet spot. Sometimes the standard '18 inches from the neck/body joint' will work out, but you're equally likely to find the best spot with mic above or below the guitar body — every instrument and every room is different. It's also well known that acoustic guitars sound better played above a reflective floor rather than a carpeted one, so put a piece of board on the floor directly in front of the player's chair if the sound needs a bit more life. Even a few tea trays will make a difference.

The only other special consideration is that of computer noise — whether you record in the same room or not depends on how loud your computer is, and in any event it's best to have the mic pointing away from the computer rather than towards it (assuming you're using a cardioid-pattern mic). Sometimes you can throw a couple of towels over the computer as you do the take, but don't forget to remove them again as soon as you're done, as there's always a risk of the computer overheating.