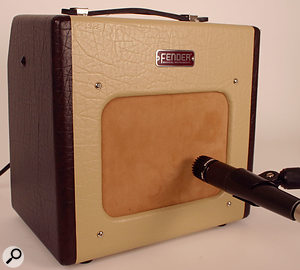 The philosophy that 'bigger is better' sometimes seems to be taking over the world — and unfortunately this often creates more problems than it solves. There are nevertheless times when a music project calls for massive guitar sounds, and these can be surprisingly easy to achieve once you suss out that, when it comes to 'big', oddly enough, less is frequently more.

First let's define what we mean by big. Big guitars can be electric or acoustic. What makes them outsized is that they take up a large percentage of the track's sonic space. We think of them as being punchy and dominating the mix, demanding the ear's attention.

It is an axiom of physics that two things cannot occupy the same space at the same time, and the first thing to remember when attempting guitar girth is that everything on your recording can't be huge at once. If you want big guitars you can't necessarily have big drums and vice versa. When instruments and vocals compete for the same space, you get mud, not mass — so if you want guitars that rule the world, your bass and drums might need to be subservient. "But what about Led Zeppelin?" you might be thinking, "Those guitars rocked and Bonham's drums were monstrous!" True — but if you listen carefully, you'll find that while Page's riffs indeed raged, they occupied a relatively narrow frequency range. Said frequencies were almost entirely in the mid-range, giving his licks presence and leaving plenty of room on the bottom and top for Bonzo's kit. Conversely, if you study the hit records of Boston, where the guitars occupy almost every kilohertz of sonic space, you will find that the drums are often barely audible through the wall of strings. So be aware of that. In this article, though, we're concerned with those times when you want the focus on the guitars, and here are six quick tips on how to enlarge your recorded axe:

1. Bigger Doesn't Mean More Gain: There is a reason that rockers are returning to the classic tones of the late '60s and early '70s: punch. Certainly, if you play the saturated, scooped sound of modern metal loud enough it will overpower you, but it can often sound more like flies buzzing than lions roaring. The guitarists of the Golden Era (such as Jimmy Page, Jeff Beck and Eric Clapton) played half as loud, but their open, mid-range laden, overdriven tone is the magical sound that vintage and boutique guitar and amp collectors seek. So back off the gain and turn up the master volume. You'll have to work a little harder for sustain, but with a well set-up instrument and a little finger-technique you'll get it. The reward is a sound that leaps out of the speakers at any volume.

2. Small Is The New Big: If you crank up the master volume of a 100W amp while tracking basics, you can easily have leakage issues in all but the largest studios (not to mention hearing problems). Of course, it is possible to capture the full sound of that Marshall double stack in all its glory, by miking a great-sounding room in exactly the right spot. But if you're working in the confines of a project studio you'll likely only be miking one of those eight speakers anyway, so why not opt for a 1x12, and a 15-40W amp instead? This will allow you to run the power tubes at their limit without excessive spillage, or eviction proceedings. It is worth noting that it was a Silvertone combo that produced the world-changing guitar tones on the first Led Zeppelin record.

3. Eschew That Overdub: Piling track upon track would intuitively seem to make for a bigger guitar presence, but this is not always the case. Sometimes a single, well-miked small amp, set for just the right level of crunch, can be more sonically substantial than track after track of overdubbed, fuzzed-out behemoths.

4. Or Not: If one track of guitar is not cutting it, there are a number of ways to add parts without turning the tune into a wash of indistinct noise. If you're confident that you can easily play the part again, record it to another track: you should find that the slight inconsistencies in your tuning and performance timing help enrich the sound. If it is a particularly tricky riff, you might want to send the original part to an aux track and add between 10 and 40 milliseconds of delay (with no original signal) to the aux output. In digital recording situations you can copy the part to the second track, then shift the file the required amount. Doubling distorted electrics with a clean electric or an acoustic track can add attack and presence.

5. Panning Out: Once you have the part coming up on two tracks you need to decide on the panning. If this is it for guitars, you will probably want to pan the two tracks right and left. How hard you pan them depends on taste and intention, and I've prepared a few audio files that are available on the SOS web site, at www.soundonsound.com/sos/jul08/articles/guitartechaudio.htm. Panning them hard will open up space for bigger drums and more mid-range based vocals in the middle (audio clip 1). Pulling the panning in will make the sound denser (audio clip 2) but leave less space for drums and require higher-pitched vocals — which is a reason why the screeching vocals of many modern metal singers work in that genre. If there are more guitar parts to come you can pan this riff left, separating the two tracks by panning one hard and the other less so. Then you can repeat the process with the next part on the right (audio clip 3). Be aware of phasing issues — and that adjusting the delay between the doubled tracks can easily rectify these.

6. All Things Being Equalised: By rolling off the frequencies that compete with other instruments and accentuating the ones that don't, you can have hefty, present guitars without sacrificing bass and drum tone. You can also try recording a second version of the riff with a radically different sound. It doesn't even have to sound good by itself but when added to the other track it will expand the sonic spectrum, resulting in a guitar texture that is colossal. Michael Ross