For years, bands have needed unwieldy, expensive PA systems to play live, and separate monitoring systems to hear themselves play. Bose's new system aims to do away with much of this complexity and expense. We take a first look...

Once upon a time, live music was played without the assistance of huge electronic sound systems. Instruments were designed to project sound into space, since their players couldn't depend on microphones or pickups to make themselves heard. Whatever the audience was hearing, the musicians were hearing too. 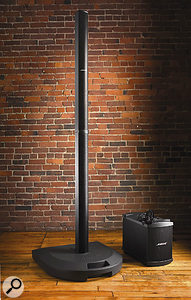 One of Bose's new L1 Cylindrical Radiators. The B1 bass module can be seen on the right, and the small handheld R1 control unit is sitting on top of that.Even in the early years of the electric music era, starting when crooners began using microphones and guitarists first plugged into amplifiers, and continuing right up until the late 1960s when rock & roll became big business, the musicians on the stage and the people they were playing to all heard the same thing.

But there came a time, at least for the biggest pop music acts, when everything changed. A lot of people point to The Beatles' performance at New York's Shea Stadium, home of the New York Mets baseball team, as the watershed event. Absolutely nobody, onstage or off, could hear any of the music at all. The band's stage amps, although they were the biggest available, and there were lots of them, couldn't possibly compete with tens of thousands of hysterically screaming fans. The Fab Four might as well have not bothered to even plug in; it's doubtful anyone in the audience would have known. After a few more concerts like that, they gave up on touring altogether.

A Bit About Bose

Bose Corporation also remember live music before sound systems, and for the last 10 years they've been working to recapture how music was presented to audiences before concert producers found it necessary to employ the megawatt amps, 18-inch subs, and flying tweeter arrays that everyone takes for granted today. Now they've announced a new line of products that might provide a considerably simpler solution to the problem of affordable, compact live-music amplification.

When you think about live music systems, Bose is not exactly the first name to come to mind. The company is a somewhat quirky organisation located in Massachusetts, on the East coast of the USA, and who are celebrating their 40th anniversary this year. Privately held, they have been following their own path for years: they don't exhibit at the AES or NAMM trade shows in the US, nor the Frankfurt Musikmesse in Europe, and they're not very 'visible' in the pro-audio world. Since their founding by MIT-trained physicist Dr Amar Bose, they've had most of their success in the home-stereo and 'installed-sound' markets. They're not known, though, for working and playing well with others; they're very close-mouthed about the technology in their products, and among many serious audiophiles they're not viewed particularly favourably. They even had a nasty scrap some years back with the venerable American non-profit testing organisation Consumers Union over a review in their magazine Consumer Reports which said that instruments reproduced on a pair of Bose speakers "tended to wander about the room." Bose sued, and took the case all the way to the US Supreme Court who, 14 years later, threw it out.

But Bose speakers today have their adherents among home-theatre aficionados, and the company has been making serious inroads of late into the world of high-end automobile sound systems. Bose noise-cancelling headphones have become a common sight on aeroplanes, and if you glance up at the walls and ceilings of restaurants and upmarket clothing stores the world over, you'll see the company's name printed on speakers of many shapes and sizes.

But you won't find many Bose speakers in recording studios, music clubs, or concert halls. What forays they have made into the live-sound world have been in the form of permanent systems in places like churches, and relatively small portable auditorium-sized systems; hardly the stuff of heavy-metal festivals. But all that could be about to change.

Two days after this Autumn's AES convention in New York, the company invited a group of audio journalists to their corporate headquarters four hours away, to introduce them to a new product line aimed expressly at professional musicians and the venues where they play. In a rare public appearance, Dr Bose himself spoke to the group. "Research outcomes," he said, "are usually small steps. Very seldom, you get a big step. But they do occur occasionally, and this announcement, in my opinion, is such a big step."

Bose, both the man and the company, have long prided themselves on putting a premium on research. "Research lowers the balance sheet: you've got outflow without income for a long time," said Dr Bose. But since the company is not beholden to shareholders, they can pursue research paths that interest them without having to know that every path will lead to profit. "Many of the things you do in research will turn out not to be possible," he said, "but there's often fallout that's useful in other directions." So when Kenneth Jacob, the chief engineer of the company's professional systems division, told his boss that his group wanted to work on a new approach to concert sound, "I told him, 'Go ahead,' even though it meant we'd have to find budget resources outside that division."

Jacob's presentation began with the Beatles' Shea Stadium debacle, which showed that radical changes had to be made if really large venues for rock & roll were ever going to be practical. By the end of the 1960s — the Woodstock festival being a prime early example — those changes had been made, and a new paradigm had taken over, which Bose engineers have dubbed the 'triple-system' approach: guitar/bass/keyboard amps on the back of the stage, monitor speakers with their own mix at the front of the stage pointed at the band, and the big cabinets pointed at the audience. 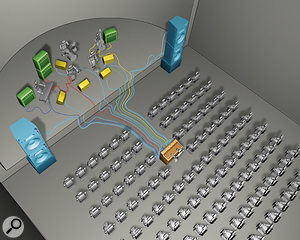 Bose's documentation makes a nice case for using their system to eliminate on-stage clutter. Here's an existing 'triple-system' PA, featuring on-stage monitoring 'wedges' for the musicians (in yellow), bass and guitar amps at the back of the stage (in green), and PA speakers projecting to the audience (in blue). Then, of course, there's the front-of-house console (in orange), and all the tie-lines connecting everything together. 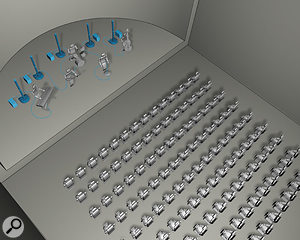 Here's Bose's (considerably simpler) suggested system based around the new Cylindrical Radiators.As you'll know if you've ever played live through a system like this, such an approach can create its own problems. Primary is that none of the three systems necessarily sound the same as any of the others. So while the band may think they sound OK, out in the audience, the sound might be terrible — or vice versa. And rarely is everyone in the band happy with their mix, so they turn themselves up — which results in everyone else turning themselves up, too. "It gets to the point where musicians and members of the audience are compelled to wear earplugs," said Jacob, "which means that something is terribly wrong."

Artists, Jacob continued, are forced to travel with a huge amount of equipment, which must be set up, connected, and tested at each site, or else they have to rely on unfamiliar rented or house PAs. Live sound systems are so complex that small failures, like a bad cable or a shorted switch, can cause gigantic problems which take hours to track down and fix. High SPLs create lots of reverb, particularly in clubs and halls that often have poor acoustics to begin with, which overwhelm the direct sound. Loud stage monitors can make the situation much worse, since there's a constant slap delay when their sound bounces off the back wall and heads out into the house.

Jacobs also pointed out issues in the psychoacoustic realm that aren't so obvious. "When we can look at what we are listening to... we gain a much deeper appreciation and understanding of what has captured our attention," he said. "You can't do that in a triple system, since sound comes from the closest speaker." And of course, that in turn may be nowhere near the instrument that's making the sound. What's more, when multiple sound sources are mixed, our ability to sort out sounds by their arrival times relative to our two ears, which is so reliable that it works even when we're blindfolded, ceases to work. The result is reduced clarity and intelligibility.

The saddest part of all this is that while the use of triple systems may be unavoidable in huge arenas, it has trickled down to small clubs and halls where they may not be at all necessary. Jacob's presentation included a video with short bits of interviews with a number of working musicians, all of whom had nothing good to say about most amplified performance situations. As one artist said, "You're playing to the speaker," as opposed to the audience or the other players, "because that's all you can hear." But no-one has yet offered an alternative, especially one that can handle relatively loud music.