Bose's approach to solving this is pretty radical, and at the same time surprisingly simple. Their new products are called S1 Cylindrical Radiator Loudspeakers, and are part of the new Personal Monitoring System, presumably so-called because each musician gets their own loudspeaker under the new arrangement, which plays back only the sound of their own instrument, not a mix of the whole band. Two dozen or so small drivers are arranged vertically in each S1, which is a flagpole-like structure about 3.5 inches in diameter and 86 inches high. The pole is set into a floor stand, which is 26 x 26 inches, and contains the controlling electronics (sadly, we weren't allowed to peek inside the units). The arrangement of the drivers in the pole is designed to eliminate all vertical dispersion: the sound is projected forwards, and in an arc of almost 180 degrees horizontally, but there's nothing projecting above the top of the column, and nothing bouncing off the floor. The principle behind the speaker is apparently similar to that of a diffraction-slit tweeter, something found these days in more conventional horn designs. "Any large straight source is directional," said Jacob, and the closely spaced drivers in the Cylindrical Radiator behave "to first approximation, at the wavelengths involved, as a monolithic source. This is an exceptionally large straight source in the vertical dimension, and thus is exceptionally directional in the vertical pattern."

The most obvious effect of this is that, in theory at least, the sound is transferred to the room much more efficiently than with a conventional spherical-front speaker, or even a directional horn. And in fact, while a guitarist played, the journalists were invited to walk directly towards the speaker from across a large room, and observe that the difference in sound level as one approached was remarkably small, even when one put one's ears right up to the speaker. In theory, then, musicians can play at lower levels, and still fill a space.

If you extrapolate this concept a bit further, you'll see it has more potential advantages. Since there's no sound projecting upwards, reverb from ceiling reflections is eliminated. The system is compact enough that each performer (or at least each section) can have their own speaker right near them, restoring the perceptual correlation between sound and image for the audience. The mix is relatively uniform at any point on the stage (at least as long as no-one goes behind any of the speakers), except that each player gets to hear a little more of his or her own sound — and that means separate monitor mixes are no longer necessary. In fact, monitors themselves can be dispensed with: since the speakers are designed to go behind the perfomers, they serve as backline, monitors, and house. As in the days of acoustic performances, the musicians and the audience hear exactly the same thing, from the same speakers.

You might think that putting the speakers behind the microphones would create feedback loops, but in fact, according to Jacob, the system is significantly less prone to feedback than a conventional system. "One reason is that there are far fewer signal loops that can feed back, because you have one microphone connected to one loudspeaker, instead of one microphone connected through the mixer to multiple speakers. Second, with a traditional system, to get a good level at the back of the audience means much higher levels at the stage, where the microphones are. With this approach, the stage level is almost the same as it is at the back of the room, hence lower in level, and less likely to cause feedback." 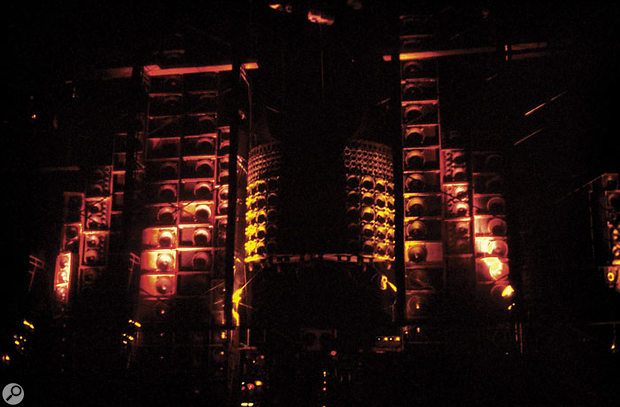 A previous alternative to the 'triple-system' PA: The Grateful Dead's vast Wall Of Sound system in 1974.Photo: Jim Anderson Photography

The mooted system is somewhat reminiscent of The Grateful Dead's legendary 'Wall of Sound' system of the early 1970s, which didn't use monitors, except for sidefills, and had each instrument and vocalist coming from a separate, although enormous, bank of speakers (the total was 641 drivers, driven by 26.4kW of amplifier power — for a description of this, check out www.dead.net/cavenweb/deadfile/newsletter19soundrap.html). Those who heard the system swear that they've never heard better concert sound before or since, but the idea fell victim to the oil crises of the mid-1970s, when it became too expensive to transport by road. 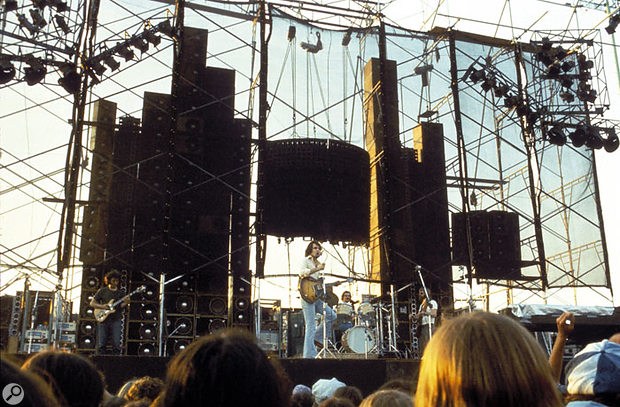 The Wall Of Sound in action at a Grateful Dead gig the same year.Photo: Jim Anderson Photography

Bose's system, fortunately, doesn't require a 40-foot trailer to haul around, nor does it require a Grateful Dead-sized budget. They are pricing the system so that working musicians can afford to own it: the starting price is US$1699 for a single S1 pole and floor stand, including a remote control with level and tone controls. (UK pricing has yet to be set, but at the time of going to press, this equates to around £1000). Built into the stand is a simple four-channel mixer, two of the channels including mic preamps and effects inserts, as well as three 275W power amps. A control panel lets you select from among 100 equalisation presets created by Bose to complement a wide range of instruments and voices. The system is designed for portability: the seven-foot pole breaks down into two sections, and the floor stand weighs in at only 35 pounds.

The small drivers in the columns mean you're not going to get a lot of low end, but you can get more bottom by purchasing one or more separate B1 bass modules for $300 each (currently around £170). The system automatically re-equalises itself when you plug the 28-pound modules in, with the result that the sound remains tonally consistent, only louder. Each of the members of the seven-piece funk/blues band at Bose's demo was playing with a bass module, except for the bass player, who had six of them.

There are some interesting issues raised by not having a central mixing console under the control of a dedicated engineer. Performers who are used to hearing themselves way up in their monitor mixes might have trouble getting used to dealing with a more balanced sound. If they turn themselves up too much, the audience will hear an off-balance mix, and the rest of the band might be tempted to crank their volume too. Jacob said that Bose has checked this out "thoroughly" in small- and medium-sized rooms. "Without exception, the testing showed that musicians do a fabulous job of mixing themselves. They say that when they're playing acoustically they mix themselves without difficulty, and playing using our approach is the same thing. Test groups were able to establish a mix that was superior to the vast majority of mixes created using the conventional triple-system approach... When someone solos, they naturally play louder and the other musicians modify their playing volume to make the solo more pronounced, something that acoustic instrument players have always done live naturally."

A crucial question, of course, is whether a system like this can be loud enough to be practical in the real world. In the nightclub-sized room where the demo took place, Bose's band was able to get some very respectable levels going. Jacob said the systems were operating nowhere near capacity, and that the company has tested them with rock bands in 400-seat theatres with 100-foot throws. Bose anticipates these systems will be used primarily in smaller venues — "There are a lot more of those than there are bigger ones" Jacob said — although he also noted that they would be appropriate for a larger hall as part of a hybrid setup: the band and the audience close to the stage could benefit from the Bose system, while a second, conventional system, pointing away from the stage, would project the sound to the rest of the audience. "In this configuration," said Jacob, "the musicians will enjoy all of the benefits of the new approach — namely playing better, because they can hear themselves and each other." It would be very instructive to see such a system in action.

I asked about whether there could eventually be a smaller version, suitable perhaps for busking. Although one engineer laughed at my subsequent suggestion of a battery-powered model — the units apparently consume a lot of power — Jacob says he's interested in "extending the technology in both directions" — that is to say, larger and smaller.

So will Bose's Cylindrical Radiators do what the company claims they will to clean up live music? It's going to take a lot more than a nicely controlled demo in front of a bunch of audio scribes to convince the musical world that these things can put up with the vagaries of travel — the dank, smoke-filled rooms they'll be asked to perform in, and the unpredictable musical and social behavior of musicians and fans alike. But from the point of view of this middle-aged rock & roller, the concept makes a lot of sense... it's something of a get-back to the days when amps and drums didn't have to be miked, when a Fender Twin Reverb with an extra cabinet was the best vocal PA you could want, and when I was the only one responsible for how the music I was playing sounded.

Certainly, schlepping a seven-foot column collapsed into something the size of a trombone case, a couple of bass modules, and a good effects/amp-simulator pedalboard seems a small price to pay for regaining complete control over one's own sound. Especially when you compare it to the traditional alternative: hauling around a Marshall stack whose output will get squeezed through a single SM57, then mangled by a Guinness-soaked mixer and shoved through suspicious-smelling power amps into a pair of grungy cabinets whose best days were before they left the factory, all of which are under the control of an engineer who would much rather be at home watching television.

Whether the company's intriguing idea of using the system as a 'room within a room' for larger venues is practical, or if it will pass muster with professional sound companies who, after all, are used to doing things quite differently, is still far from clear. But for smaller venues like clubs, theatres, school auditoriums, function halls, and the like, and for the musicians who play in them, Dr Bose and his minions may have come up with something worth looking at and listening to. Once they get this flagpole up, we'll have to see if anyone salutes...