Sonar is dead, long live Cakewalk by Bandlab! We run through some of its top features.

Now that the equivalent of Sonar Platinum (minus the third-party add-ons) is available as a free download from bandlab.com, in the form of Cakewalk by BandLab, it’s not surprising that a lot of people are checking it out.

Although Cakewalk on its own lacks some of Sonar Platinum’s bundled plug-ins and instruments (see 'Spot The Difference' box), what’s most important is that you can now get Platinum’s functionality completely free. Cakewalk has quite a few features that are rare at best, and some you won’t find anywhere else. So if you’re just getting started with it — or if you missed out on these when using Sonar — here are some of my favourite features. To find out more about them, go to www.soundonsound.com/techniques/software/daw/sonar, and review the columns written about these topics when they were part of Sonar.

Three ProChannel modules, from top to bottom: QuadCurve EQ, Tape Emulator, and Console Emulator. If all modules aren’t visible, you can scroll up and down within the ProChannel.Although sometimes overlooked because it was a free EQ bundled with Sonar, the QuadCurve module in ProChannel has four distinct EQ curves — a gentle Pultec-type curve, two SSL emulations, and a ‘hybrid’ curve. Once you learn how these four EQs differ, you’ll be able to choose the right tool for the right job. It also has a spectrum analyser (although there are no adjustable parameters, so it’s more like useful eye candy), and a zoomed view that’s great for making adjustments with a touchscreen. The high- and low-pass filters go up to 48dB/octave, and there’s also a ‘gloss’ button for adding a little bit of high-frequency sheen. Sure, it’s ‘just’ an EQ — but a very capable one.

Another feature of the ProChannel is its built-in Console and Tape Emulation. Granted, these aren’t unique features — console and tape emulators are plentiful, and there have always been places to insert effects in DAWs. But the ProChannel ends the window clutter that happens when you’re using multiple VST effects in the FX Rack, and places them neatly in a virtual channel strip that lets you create your own mixer architecture. You can also drag in FX Chains, which allows any VST or DirectX plug-in to have a productive life as a ProChannel module. The reason for mentioning the Console and Tape Emulation is that they fit well with the ProChannel concept, especially when combined with Quick Grouping (of which more later), so that you can change your mixer instantly from a Trident to an SSL emulation, or turn up the tape grunge on all channels at once.

And, of course, there’s the Sonitus Effects Suite. Go ahead, laugh. They’ve been around since close to the turn of the century, they’re DirectX format, the parameters don’t have MIDI Learn, and users regularly opine in the forums that the user interface looks dated (which usually draws the response of “they’re the clearest user interfaces ever, so leave them alone!”). But the reality is that Sonitus got it right. I use the Multiband all the time to create frequency bands for multiband processing, the Delay effect’s independent left and right channels include crossfeed, the Modulator is outstanding for going beyond what guitar stompboxes do, the Surround plug-in can do tremolo and vibrato (as well as generate white noise)... you get the idea. These don’t have skeuomorphic interfaces for those who listen with their eyes, but ignore them at your own risk.

As for the Quick Grouping feature, it’s surprising no other DAW has appropriated this concept. The basic idea is that if you hold the Ctrl key while moving a control, other instances of the same control will move as well. For example, suppose your song has ‘fader creep’ and now your master output is going well above 0dB. Rather than reduce the master fader, Quick Group the channel faders and bring them down simultaneously until you find the right level. Another useful application is to enable/disable all the Console Emulators at once to hear how they affect the sound.

Cakewalk and Magix Acid Pro are the only programs that can create stretchable Acid-format files. While that may seem less relevant with today’s high-quality, DSP-based time-stretching, Acid-ized files are still the most flexible way to accommodate tempo and key changes, particularly because you can add markers to change keys. But the Loop Construction View can do much more, like special effects, audio step sequencing, and even tape-style varispeed effects on individual clips.

Sonar was also the first program to steal — I mean, be inspired by — the Ableton way of launching clips. Although this approach has now also been adopted by Acoustica Mixcraft, Cakewalk’s implementation is as close as you can get to working in the Ableton Live mode. What’s not so well known about Matrix View is that it isn’t just of interest to groove- and beats-oriented music, but is a great playpen for songwriting — especially because you can improvise in the Matrix View while recording tracks in Track View. It’s even possible to treat it as a sample playback instrument and drive the cells from a MIDI track (as described in The Second Big Book of Sonar Tips, available from Reverb.com). 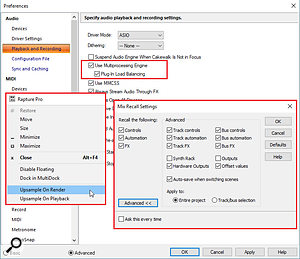 This collage shows the Plug-In Load Balancing option in Preferences, the Mix Recall Settings window, and the Upsampling FX window that’s available for each plug-in so you can upsample only on plug-ins that actually benefit from it.This feature was fairly basic when first introduced, so some people filed it under the “might be useful someday” category. However, it was updated frequently in the following months, becoming ever more versatile in the process. Mix Recall is not ‘Edit Recall’; it does what the name implies — saves and recalls mix and automation settings. However, it has two very useful extra features. You can combine mix elements from different Scenes, like bring the perfect vocal, drum, and guitar automation into a mix where the automation for those parts wasn’t as good. Also, you can export multiple Scenes all at once. One application is to create several mixes, each without one of the instruments, then export them for the various members of a band so they can practice their parts to ‘music minus me’ mix.

While the 44.1 versus 96 kHz controversy rages on, one non-controversial aspect is that recording at 96kHz can eliminate audible aliasing in older plug-ins that generate lots of harmonics (such as synths with pulse waves, or high-gain amp sims), or even newer ones that don’t perform internal oversampling, or that lack appropriate anti-alias filtering. However, it’s often not practical to record an entire project at 96kHz because that cuts down on the amount of audio you can stream, and plug-ins you can insert. With upsampling, Cakewalk can render instruments at higher sample rates to obtain the benefit of recording at those sample rates (audio with no aliasing), then downsample the audio back down to a lower sample rate without the aliasing. You can do this for playback as well as rendering. 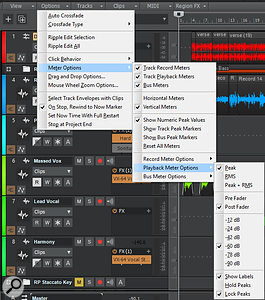 Cakewalk by BandLab’s metering is versatile — and very helpful when tracking or mixing.Plug-in Load Balancing can also help make the most of your resources. This feature exploits the full power of multi-core CPUs to balance DSP workloads across multiple cores when possible. It’s not a panacea; load balancing uses CPU power more efficiently, but it also requires some CPU power because it processes the plug-ins at smaller buffer sizes. It also doesn’t apply to virtual instruments, or help if the loads are already balanced. However, if there is CPU spiking, one core is significantly higher than the others (look at the performance meter), the project uses a high-latency audio setting, or one track performs most of the effects processing, Plug-in Load Balancing can let you run more plug-ins, more efficiently, and with fewer audio dropouts.

It was tough to figure out what to choose for the last special feature. The per-channel MIDI arpeggiators? Fret view with tab? Theme editor? Smart Swipe? The extensive note-taking options? Well, meters may be boring, but the metering options in Cakewalk are really helpful. Narrow the dynamic range to see only the top few dB to check on dynamics control, or set them to a 90dB range to see if there’s background hiss getting into an input. You can show peak and RMS values at the same time, lock or hold peaks, change meters to horizontal position for super-resolution... and even change the colouring to make them look really cool. Meters may not be an exciting topic, but Cakewalk by Bandlab is trying to change that.

Although Cakewalk retains all of Sonar’s functionality, it lacks most of the third-party plug-ins that used to come bundled with Sonar — with a few exceptions. Still included are the TTS-1 synth and Studio Instruments Suite, TH3 Cakewalk Edition amp sim, the Sonitus effects suite, and the Boost 11 limiter. Cakewalk also includes the ProChannel modules that came as part of Sonar Platinum, including Breverb Sonar and Rematrix Solo, but excluding the two Boz Digital modules.

Note that if you already have Sonar, all of the add-ons will appear in Cakewalk by Bandlab — provided you keep your Sonar installation intact! You can safely install Cakewalk and Sonar alongside each other, so there’s no reason to uninstall Sonar.