We look at how to get the most out of Live's compressors.

Compression, essentially, amounts to reducing the range between the highest and lowest levels in an audio signal. Live offers four audio effects devices for this — Compressor, Glue Compressor, Multiband Dynamics and Limiter — each of which yields a quite different result. Multiband Dynamics was covered in detail in the May 2012 Live column, and I'll delve into the many creative uses of Live's other dynamics processor, Gate, in a future issue. Here we'll look at how the remaining three audio devices work and touch on the alternative of using the Velocity MIDI effect to compress a MIDI instrument's output. Compression theory has been covered extensively in SOS over the years, and the 'Read All About It' box provides links to the online versions of many of these articles.

Although you probably couldn't bring this off manually, you can think of a compressor's essential settings — threshold, ratio, attack and release — in terms of riding a track's volume fader. The threshold is the level above which you start moving the fader. The ratio is how far you lower the fader per 1dB increase over the threshold; a ratio of 2:1 means that the level above the threshold is cut in half. Attack and release dictate how fast you're allowed to move the fader. So, while the threshold and ratio might dictate a radical change of level, a long attack setting could prohibit you from fully implementing that change when the level rises very quickly. 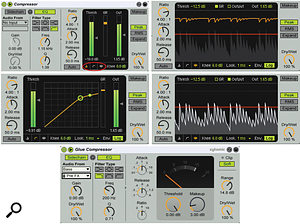 Compressor presents three views, selectable using the tabs circled in red. The Collapsed view (top left) has input and output meters with accompanying threshold and output‑level faders. The foldout Sidechain panel at the left is available in all views. Transfer Curve view (middle left) is ideal for simultaneously adjusting the threshold and ratio settings using the XY‑control (the green circle) while seeing the effect (the green dot riding the curve). The Activity views shows the result as a graph, either as a gain reduction timeline in orange (top right) or an output timeline in light gray (middle right). Glue Compressor has a single meter showing the compression amount in decibels. Put another way, long attack settings allow fast transients to get through. Long release settings keep the level from pumping up and down when you have rapidly repeating level changes.

Compressor and Glue Compressor share many of the same features, but they differ in both philosophy and sound. Compressor is an all‑purpose design intended both for individual track and mix‑bus compression. Glue Compressor, adapted for Live in collaboration with Cytomic (www.cytomic.com), emulates the SSL G-Series bus compressor and is particularly well suited for use on submix and master buses. Both devices offer filtered side‑chain input for triggering compression from other sources and a dry/wet mix knob to easily facilitate parallel compression. A good approach is to try Glue Compressor first on mixes, which are typically less unruly, and to turn to Compressor for muscle jobs like taming aggressive percussion and lead tracks, but don't automatically rule out either device.

Compressor works in three modes — Peak, RMS and Expand — selected with buttons on the right. The first two provide compression with ratios as high as -inf:1 (which amounts to limiting, but with options not available on the Limiter device). In Expand mode the ratios range from 1:1 to 1:2. Expansion increases the dynamic range: at 1:2 the level above the threshold is doubled. You might use expansion, for example, to attempt to restore dynamic range to clips that have been irreversibly over-compressed. Finally, Compressor offers soft‑knee compression, lookahead of zero, one or 10 milliseconds and a logarithmic release mode that rebounds more quickly from sharply compressed transients. Glue Compressor's features include soft clipping above -0.5dB and a Range control to limit the maximum amount of compression.

Getting compression right is often as much a matter of experiment as experience. With Live's compressors, start with the presets; they're well designed, helpfully named and there aren't that many of them. When you don't find exactly what you want, tweaking the settings will often get you there. Beyond that, experiment with different device configurations. Here are four examples for taming a radical snare drum (to better focus on the results, try these with a clip containing a single snare‑drum hit).

Limiter is a special-purpose compressor whose job is to ensure that peaks never exceed the Ceiling setting. This makes it especially well suited for use on the Master track to absolutely prevent clipping. Limiter lacks most of Compressor's controls because strict limiting doesn't use them: Attack (as fast as possible), Ratio (–inf:1), Mode (Peak), 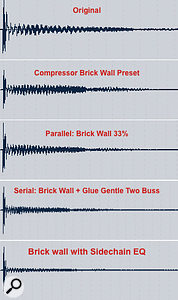 Here are four different compression techniques applied to the same snare‑drum hit (top). The first is the Brick Wall preset for Live's Compressor. The second uses parallel compression, the Brick Wall preset with a Dry/Wet mix of 33 percent — the wet component is the snare sound without transients, and the dry component adds back the transients. The third uses serial compression, following the Brick Wall preset with Glue Compressor using slow attack and a 2:1 ratio. Finally, bandpass EQ in the Sidechain fold‑out is used with the Brick Wall preset to emphasize the lower‑mid frequency range for compression triggering. Knee (hard) and Sidechain trigger (never). Of the controls that are provided, Limiter's Release knob and Auto button work just like Compressor's; there is always some lookahead, but you can choose from 1.5, 3 and 10 ms; and you can choose whether both stereo channels receive the same limiting or are processed separately. The Gain setting affects the input, so raising the gain will bring up the body of the audio at the expense of more radical clipping of transients that exceed the ceiling.

When working with virtual instruments, keep Live's Velocity MIDI effect in mind as an alternative to compression and limiting. It can often achieve what you're after without the negative aspects of radical audio processing. It works by altering the velocities of incoming MIDI notes so as to compress or expand the velocity range, or alternatively, to gate notes with out‑of‑range velocities. 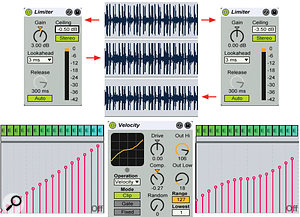 Limiter (top) clips audio peaks that exceed the Ceiling setting; raising the Gain increases clipping while raising the overall level; lowering the Ceiling increases clipping while lowering the overall level. When velocity controls a virtual instrument's volume, you can use the Velocity MIDI device (bottom) placed before the instrument for an effect similar to compression.One final thing to remember is that when you're compressing material with significant volume changes, track multing (dividing the material over several tracks with relatively consistent volumes) is often a useful precursor to compression. Otherwise, you'll probably need to make repeated adjustments to the compressor's threshold and quite possibly to the ratio and release settings as well as the dry/wet mix.

Read All About It

Compression is a huge subject, and we have covered it extensively in features and columns over the years. Here, by topic, are links to some worthwhile references currently available on the SOS web site.

Compression From Basic To Advanced