Understanding the role of buses in the Pro Tools mixer opens up powerful routing possibilities.

Last month, we started looking at the I/O Setup window, which can cause confusion for new and old users alike. If you read that instalment, you should know how and why to label everything, and what paths and sub-paths are in the Pro Tools mixer. This month, we'll explain how to manually configure the I/O Setup window for your individual needs, starting with a detailed look at each tab.

As explained last month, the I/O Setup window has six tabbed pages. A neat shortcut trick which I found when researching for this article is to hold down the Command key (Mac) or the Ctrl key (Windows) and use the left or right arrow keys to cycle through these tabs.

In general, it is best if you configure the system-specific options in the Input, Output, Insert, Mic Preamps and H/W Insert Delay tabs, before tackling the Bus page. If you use an Avid HD Omni I/O interface, be sure to configure the Monitor page in the Hardware Setup window for the HD Omni before dealing with the I/O Setup window. Once you have configured your system, you should not need to change it unless your hardware setup changes.

The Input tab lets you label the input paths provided by your audio interfaces, so that when you select them in a Pro Tools session, you'll know what signal each one should be carrying. You can also set the formats of these paths and which channels feed them. Multi-channel input paths (stereo or greater) can have any number of sub-paths. Two or more input channels can also have overlapping input paths. Input names, channel widths, and physical input mappings are saved with the system and the session, and can be recalled from either.

The Output tab, similarly, lets you name paths to indicate what is plugged into the outputs of your interface. If you change your hardware you should only need to change things in this tab — all the bus routing can stay untouched.

You might wonder why outputs are apparently displayed in the Bus tab as well as the Output tab. The reason is that in Pro Tools 8.1 and later, there are two types of buses: internal mix buses and output buses. Avid developed the latter so as to separate the actual output from the routing settings. What this means is that when you select an output, you are actually selecting an output bus — and then, in the Bus tab of the I/O Setup window, you can determine how these output buses are routed to your actual hardware outputs.

If this is confusing, it might help to think of the role of a patchbay in an analogue studio. A patchbay might let you reassign a desk output so that, for example, output 1 from the desk could feed track 8 on your multitrack, without needing to change the routing within the desk. Likewise, output buses make swapping sessions between systems with different hardware setups much easier: you can leave all the routing within the session alone, as it refers only to output buses, not to outputs themselves, and then just reallocate these buses to the new hardware outputs in the Output tab in the I/O Setup window.

The default settings create loads of buses, and I tend to remove most of these. It's perfectly possible to create new buses as your session develops, without even having to go into the I/O Setup window (of which more later); meanwhile, all these unallocated buses fill up the I/O Setup window, so that new buses get put right at the bottom of the list where they are easily missed. I find that stripping out most of the unallocated mix buses helps to keep this tab a lot easier and clearer to follow.

In Pro tools 8 and earlier, it was not possible to have overlapping paths. This often led to problems when we had to reconfigure a session to work on a new system. Now, the introduction of output buses and the possibility of overlapping paths makes it much easier to resolve these kind of problems. It is also possible to map any internal mix bus to an output, and because output buses are buses, it is possible to route more than one mix bus to a single output bus. This enables a number of mixes to be routed to a single output.

Once you've set everything up to your satisfaction, you can use the Export Settings option to save all your settings. If you prefer to start sessions with a blank or empty I/O Setup window, you can create and export an I/O Settings file in which all definitions have been deleted.

Exported I/O Settings files will be available in the I/O Settings drop-down menu when you are creating a new session. They can also be imported before or after you open a session. By default, I/O Settings are only imported for the currently displayed I/O Setup tab. For example, if you are viewing the Output tab, only the settings for that page will be changed when you Import I/O Settings. If you are sure you want to import the I/O Settings for all the tabs at once then Option-click (Mac) or Alt-click (Windows) on the Import Settings button. 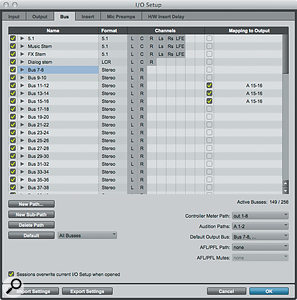 There are two types of bus in Pro Tools 8.1 onwards: conventional mix buses, and output buses. It's even possible, as here, for multiple output buses to address the same physical outputs.You also get the option to delete existing paths, but remember that any I/O assignments and automation data associated with the unused paths will also be deleted. Alternatively, you can click No to add the imported paths to the current I/O Setup configuration rather than replace it. Be aware, though, that if the import results in overlapping paths, the new paths will appear in the I/O Setup as Inactive. To help readjust a complex I/O Setup there is a Show Last Saved Setup option in both the Input and Output tabs. This enables you to temporarily see the last-saved setup from the original session.

You can also import I/O paths and path names, as well as other session data, from a different session by using the Import Session Data option from the File menu.

Suppose you want to route all the individual tracks making up a drum kit recording to a single stereo subgroup track. You could go into the I/O Setup window and create or name a suitable bus, then create a stereo aux input track and select that bus as the input — but there's an easier way. Click the output selector button on one of the drum tracks and select Track from the menu. Pro Tools gives you the choice to route the track to existing aux input tracks, and also provides a New Track option. Even better, if you hold down Alt and Shift as you do the selection, all the selected tracks will be routed to the drum submix track in one go, with no need to visit the I/O Setup window at all.

I hope these two articles have helped to debunk and simplify a much misunderstood aspect of Pro Tools. Writing them has certainly made it all clearer in my head!

There are a number of drop-down menus in the bottom section of the I/O Setup window that relate to setting the paths for various monitor functions. Controller Meter Path relates only to Avid's D-Control and D-Command control surfaces, and lets you choose which path signal the output meters display.

The Audition Paths option is more universally applicable, and enables you to specify which output path is used when auditioning files and regions from the Clip List, AudioSuite previews or the Digibase Browsers. If you find you can't hear anything when you're trying to audition a file, it could be that this has inadvertently been set to an unused output, or not set at all. The default path Pro Tools uses is the first available main output path, usually outputs 1&2. When you click on this menu you get choices grouped by channel format. You'd usually select the output path that will route to your main monitors.

The Default Output Path option determines the default output setting for any new tracks you create. Just as in the Audition Paths option, you can have different paths selected for different track formats.

If you are running Pro Tools HD, you'll also have the option to set the AFL/PFL Path. The normal way to temporarily monitor an individual track in isolation is Solo In Place (SIP): you hit that track's Solo button, whereupon all the other tracks are muted. However, there are circumstances where you wouldn't want things to work that way. For example, you as the engineer might want to spotlight an individual track during recording without affecting the mix that the musicians are hearing.

Most conventional mixing consoles, especially those used for live sound, use a combination of Pre Fade Listen (PFL) and After Fade Listen (AFL) instead. When you hit a solo button, the audio from the selected channel is routed to a separate output on the mixer (usually the monitor output), and the main mixer audio outputs are unaffected. You can choose to change SIP to either PFL or AFL by selecting Solo Mode from the Pro Tools Options Menu. Because PFL and AFL need a separate audio path, you also need to visit this setting in the I/O Setup window to select which output path AFL/PFL signals will use. In order for PFL/AFL to be non-destructive in use, this must be an otherwise unused path, using unused outputs on an interface. Enabling AFL/PFL also gives you the option to select an output path that will be muted when you use the AFL/PFL path.

If you want to integrate external hardware processing into the Pro Tools mixer, you'll need to set this up using the Insert and H/W Insert Delay tabs. Hardware inserts route audio out of your audio interface, through an external device such as a hardware compressor, and back into your audio interface again. Once set up, they let you use external processors within the Pro Tools mixer as if they were plug-ins. Obviously, you will need sufficient spare interface inputs and outputs, and if you want all your tracks to remain perfectly synchronised, you'll need to compensate for the delay that's introduced by going out and then in again. This is what the H/W Insert Delay tab is for, but rather than go into detail about its operation here, I'll refer readers to the workshop in the February 2013 issue of Sound On Sound (/sos/feb13/articles/pt-0213.htm).

There is also a tab in the I/O Setup window called Mic Preamps. This is only relevant if you have Avid PRE multi-purpose microphone preamplifiers; it lets you control them from within Pro Tools and map their inputs to inputs on your audio interfaces.