For Pro Tools users who are tired of conventional effects, convolution plug‑ins open up a huge range of new possibilities.

In this month's Pro Tools workshop, we're going to look at how far we can push convolution reverb plug‑ins beyond the run‑of‑the‑mill 'sample of a room' reverb and into sound‑design territory. There are times when conventional effects like EQ, reverb or delay just don't do what you need, and one alternative is to use unusual impulse responses in a convolution reverb, which can produce some very different sounds.

All the tricks described here should work with any convolution reverb that can import third‑party impulse responses. These include Waves' IR‑L, Avid's TL Space, and the more affordable Liquidsonics Reverberate (reviewed in SOS April 2010: /sos/apr10/articles/reverberate.htm), all three of which work on both the Mac and Windows platforms.

I am not going to explain here how to capture impulse responses, as we covered that back in June 2008 (/sos/jun08/articles/pt_0608.htm) in a masterclass on TL Space. The aim here is to understand what is going on under the hood of convolution reverbs, so that we can bring together unconventional impulse responses and use them to treat a variety of audio. For more detail on how these effects work, check out Emmanuel Deruty's Creative Convolution article from SOS September 2010: /sos/sep10/articles/convolution.htm. 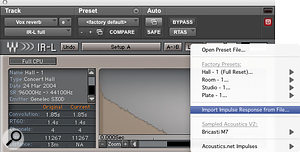 Like most convolution reverbs, Waves' IR‑L can import any sound file to use as an impulse response.

In most convolution reverb plug‑ins, you can adjust the length of an impulse response once loaded, so you can turn an audible reverb IR into a filter by making it shorter. On TL Space, this is done using the Decay control, while Reverberate has a complete envelope control section, and IR‑L's Reverb Time section lets you control how much of the IR is used. (Be aware that some convolution plug‑ins also have an upper limit on the length of the IR sample. The Waves plug‑in has a limit of six seconds, but both the TL Space and Reverberate allow IRs of unlimited length.) 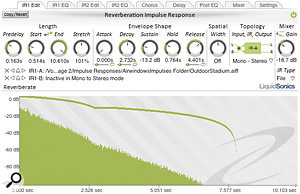 Liquidsonics' Reverberate features a comprehensive selection of controls allowing you to tailor the envelope and length of the impulse response.

To get the best results, it's a good idea to make sure that the frequency spectrums of the audio you want to process and the IR overlap, because the convolution process will emphasise these common elements. So it can be worth processing your impulse responses with EQ and fades. In some cases, the emphasised frequencies can be too strong, so that they overload the plug‑in, in which case you may need to use some EQ to keep them in check.

Try processing a vocal with a short IR sample containing plenty of high frequencies, such as a hi‑hat or clave sample, and listen to how the vocal picks up the character of the sample and how some of the harmonics and resonances of the instrument come through.

Another interesting area for experimentation is tempo. Try using an IR that has rhythmic content with the same tempo as the track you are processing. Spirit Canyon Audio, for example, offer a bundle of impulse responses called Kaleidoskopy, which includes a range of IR samples at various tempos. You could, of course, use Elastic Audio to modify any of these to suit the exact tempo of your song, as well as using your own drum or percussion parts to create custom IRs. 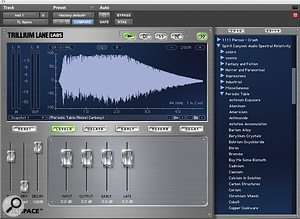 With a suitable IR, convolution can produce some fascinating tempo‑sync'ed rhythmic effects.

Another avenue to explore is trying different samples for the left and right channels of the IR. You can use a couple of mono tracks in Pro Tools to edit and match two samples, export them as a stereo interleaved file, and import that as an IR into your convolution reverb plug‑in. As an extension of this idea, try putting a Middle & Sides encoder before the convolution plug‑in — so that one IR sample is affecting the 'M' (mid or mono) channel and the other affecting the 'S' (sides or stereo difference) channel — and then using an M/S decoder after the reverb plug‑in to return the output to conventional stereo. This can be a very good way of widening out the stereo image. Again, it's worth spending some time manipulating the IR samples in Pro Tools before loading them into your reverb plug‑in.

Further special effects can be achieved by taking a very long reverb IR, such as a cymbal crash sample, and reversing it. This can produce some very neat, real‑time, backwards‑sounding effects that work well on vocals and speech. TL Space even includes a built‑in Reverse fader in the Reverb tab of controls at the right‑hand side. With this, you can not only reverse the IR but also beat‑match it to the tempo of your song, if appropriate. With other plug‑ins, you'll need to reverse your impulse responses in Pro Tools, which is simple enough: drag the IR onto a spare stereo track to import it, apply the AudioSuite Reverse plug‑in, and use Export Selected as Files from the Region List drop‑down menu to export it as a stereo interleaved file back into your IR library folder. Finally, import the reversed IR into your convolution reverb plug‑in and away you go.

Combining convolution reverbs with soft synths can be a very interesting way of generating complex material from simple sources. 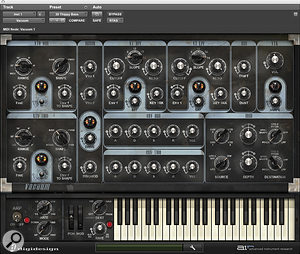 Even a simple drone from a soft synth such as Avid's Vacuum can produce interesting results when convolved with the right IR. For example, try using the Vacuum soft synth that comes bundled with Pro Tools to create a simple drone, then add a convolution reverb as an insert on the channel, and try loading IRs that have a pulsing pitch in them. Again, Spirit Canyon Audio have produced an excellent set of impulses for this purpose in their Spectral Relativity bundle. Try one of the 'Periodic Table' IRs and you will find that it adds life and movement to even the most flat‑sounding drone. You can, of course, also use soft synths to generate impulse responses that can be applied to other sources. Once you start to experiment, you'll quickly be hooked. No chance of being accused of using factory presets again!