Live offers all the tools you need for quick and convenient comping: you just need to know where to look. 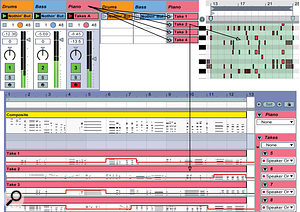 1: Clockwise from top left: multiple piano takes are recorded to accompany a looping 12-bar drum and bass scene. The recording is sliced into individual 12-bar takes. Those takes are then aligned on separate Arrangement tracks routed back to the piano track. Speaker On automation ensures that only one take plays at a time. The results are recorded as a new composite, which you can then edit as needed.

Some DAWs offer special features for recording multiple takes of the same passage and then compiling a composite from the best bits of those takes, a process known as compositing, or comping. Although it's not detailed in the documentation, Live's 'split personality' of Session and Arrangement views provides as good an environment for this process as you'll find, and in this month's column we're going to show you exactly how it's done. We'll start with the basics for both MIDI and audio comping and then move on to some handy ways to adapt the process to working with drum tracks, construction kits and effects processors. 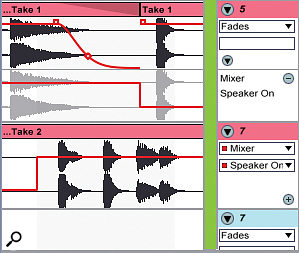 2: To create a more natural transition, the Speaker On breakpoint has been moved later for Take 1. This is then split at the breakpoint and a fade envelope is used to shorten the clip's tail.

You can record your takes in the Arrangement view, but the process is slightly easier in the Session view and it's also easier to audition takes and cull the best ones there. If you're adding a lead or background part to a section of an existing arrangement, the first step is to loop that section in the Arrangement view. On the other hand, if you're working with Session-view clips, you'll want to create a looping Scene as the background for recording your takes. If you're starting from scratch, it's a good idea to at least create background drum or drum and bass loops to play against, but in a pinch you can just play to Live's metronome. You'll probably find it easier to nail the first take if you set a record count-in in Live's 'Record, Warp, Launch' preferences.

When you stop recording, you'll have one long clip with its loop brace enclosing all the takes. Adjust the loop length so that the loop encloses only the first take. Audition the first take, and if anything in it is useful, copy the clip to a new clip slot on the same track and rename the original as 'Take 1'. Repeat this process for successive takes — without saving the useless ones, of course. When you're done, you'll have a few consecutively numbered takes. 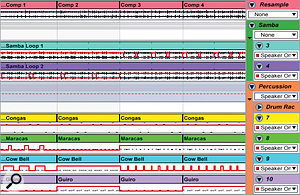 The first step in building composites from your takes is to create a new track for each take. If your takes are MIDI, route the output of each of the new tracks back to the track you recorded the takes on and keep that track record armed. Comping is much easier in the Arrangement view, so move each of your takes to the same grid position on its new track in this view. If your arrangement is empty, just move them to bar 1. If you recorded against an arrangement loop, align them with that loop. On each of the new take tracks in the Arrangement view, enable Speaker On automation and click off the speaker (aka Track Activator) button. Now start playback and audition the takes individually to find the take with the best beginning. Add automation to turn that take's speaker off at the end of the usable part, and use Speaker On automation on other takes to continue in a similar way, until you have assembled a full composite.

The best automation breakpoints won't necessarily correspond to grid lines, so you may need to zoom in and use your eyes and ears to refine some of the transitions. With MIDI, the main thing to watch for is notes near the transitions; you'll want to adjust the automation breakpoints to avoid notes at the very end of the outgoing take and to capture notes near the beginning of the incoming take. For audio takes, you may also need to add a crossfade between the takes. The easiest way to do that is to move the outgoing take's breakpoint a bit later, split the clip at the breakpoint, and adjust its fade envelope as necessary (see screen 2).

When you've finished a composite, you'll want to record it as a single MIDI or audio clip. For MIDI, simply record on the original MIDI instrument track in the Arrangement view. For audio, create a track group holding all the take tracks and then render the group track. Once you've captured the MIDI or audio composite, you can repeat the process to build different composites.

Beyond recording your own takes, comping also provides a way to tame effects that have a random element. Live's Beat Repeat audio effect is a prime example: intermediate settings of its Chance and Variation knobs randomise the likelihood and rate of repetition. If you capture multiple passes as takes, you can then create composites of the best results, rather than having to take what you get with each rendering of the project. A quick way to capture multiple passes for the same source clip in the Session view is to copy the source clip to several other clip slots on the same track and then freeze and flatten the track. (Create a copy of the track before freezing and flattening, in case you need to repeat the process.)

The comping process is a great way to create variations from pre-recorded material. For example, one of the shortcomings of commercial drum-loop libraries is that there is rarely enough variety. But if they include a few full-kit loops with the same feel or, better yet, some individual kit-piece loops, you can easily create composites to expand your arsenal. Furthermore, many libraries also include MIDI drum loops, along with one-shots from which you can build a matching kit. In that case, you can create your own kit-piece loops from the full MIDI loops and use comping to layer them with the audio loops in the library.

There are two ways to work with full-kit loops: you can create composites without overlaps, as previously described for take comping, or you can use short overlaps from one loop to create accents against another loop. Working with individual kit-piece loops, of course, gives you the flexibility to build your own drum loops from the ground up. When you have both kinds of material, you can use an audio track whose input is set to Resampling to capture everything, or you can use the methods previously described to separately capture the MIDI kit-piece and audio full-kit composites.

Aside from drums, commercial construction kits typically contain one or two loops for each part: bass, guitar, keys and so on. It takes a little more care than with drums to craft composites from those, but you'll get a lot more mileage out of the library if you make the effort.

For example, suppose you have both piano and electric piano parts following the same chord pattern. Without comping, you're limited to using them separately or layered. Comping lets you create a more interesting 'call and response' type of part by switching back and forth between them. Another trick, with a fairly simple lead or bass part, is to layer it with a delayed copy of itself (try a quarter-note-triplet delay) and then use Speaker On automation to limit the delays to certain notes. Yet another alternative, when you have several clips for the same lead instrument, is to craft new leads by treating the clips as different takes.