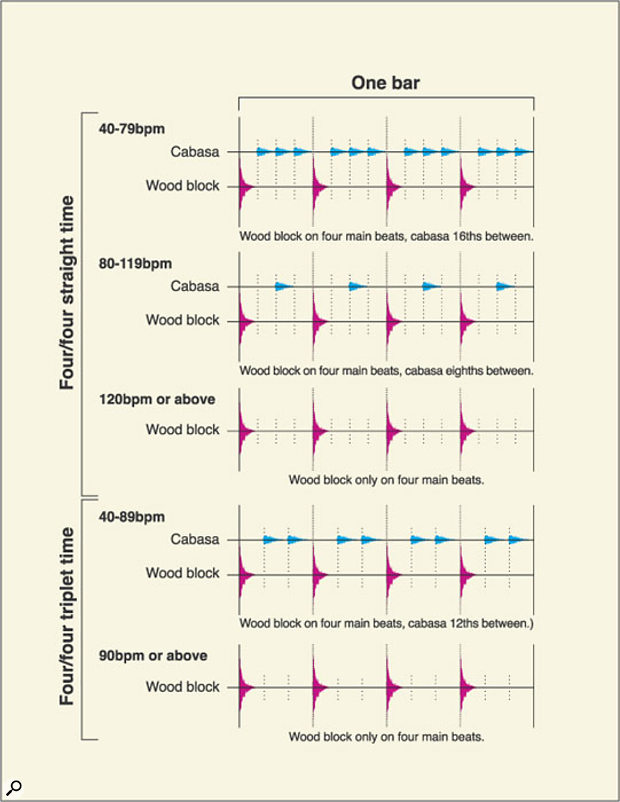 As a session drummer, I occasionally get asked by a producer, programmer or fellow musician, 'What kind of click do you want to play to?' Sometimes they forget to ask, and I end up having to face some nightmarish click scenario. Unfortunately, I can't simply ignore the problem, as playing with a click is essential nowadays. Most areas of modern production rely to a large extent on MIDI sequencing and hard disk editing, and only a brave but foolhardy few attempt to record their tracks without the safety net of pre-programmed, metronomic tempos and on-screen bar lines. In addition, live bands often want to incorporate sequenced and pre-recorded audio into their performances, and in some shows lights, video and even pyrotechnics are programmed to run alongside the backing track. In these situations, sync between band and machines can only be achieved one way: by playing to a click.

It makes no difference whether the job is a tiny club gig, a recording session or a live TV broadcast in an Olympic-size stadium in front of 92,000 people — to do my job well (ie. not go out of time with the backing track!), I need a sensibly programmed, musically intelligent click. It has become the drummer's role to form the 'human sync' between the backing track and the band, and it can be quite a pressure to know that the whole show is resting solely on my ability to hold steady with that insistent little pulse. Over the years I have encountered many types of click programming, some helpful and some very unhelpful, and I wanted to pass on to you my experience and advice on what a drummer needs from a click track. My priority is to help you avoid the 'very unhelpful click' scenario by using a bit of musical common sense.

Let's start with the all-important sound of the main click: my personal preference is a mono sample of a medium-pitched wood block, dry with no reverb. This plays the main beats, usually four in a bar. For subdivisions, I use a very short, high-pitched cabasa sample, also mono — this sound operates in roughly the same frequency range as a hi-hat, but remains distinct when I play real hi-hat on top of it! To protect my hearing, both samples are EQ'd, shelving off everything above 7kHz. This spares my eardrums a high-frequency onslaught, resulting in very little or no whistling in my ears at the end of the gig.

It's also vital to ensure that both samples are well trimmed at the front to guarantee a tight rhythmic response — you can use your sampler's graphic waveform display to zoom in and check this. Wood block samples usually have a sharp, well-defined front edge, but a cabasa has a slower attack and you may have to trim off some of its initial 'swoosh' to prevent it speaking late. Be diligent in your trimming, as even a few milliseconds can adversely affect the feel!

When it comes to the trickier question of subdividing the beat, take a look at Figure 1. This shows some simple ways of programming a click for a song in four/four time. The choice of subdivision is determined by tempo.

When playing the click into your sequencer, resist the temptation to carry on for 32 bars, or you will end up with an unnecessarily large editing job. Program just one bar, and adjust any discrepancies in the note velocities so that the sounds are dynamically even and consistent. It's a good idea to start off with MIDI note velocities in the 70-80 range; that will give you some dynamic headroom should you ever need to reprogram the click at a higher level. (Like in the passage where your guitarist lunges for the Overdrive switch on his 350W stage amp.) 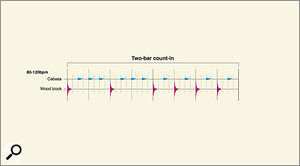 Figure 2. A good two-bar count-in, all eighth notes.Next, make sure the click is in time! Hard quantise those MIDI notes — you should have no qualms about doing this, as an out-of-time click cannot possibly help the feel of your track. There are a couple of caveats, though:

Although this may seem blindingly obvious, make sure that the click continues through all the sections of the arrangement (even the really quiet bits!) and stops in the right place at the end of the song. Using a click shouldn't preclude the use of tempo changes or rallentandos, but I've found that these occur so rarely in sequenced music that it's best to warn the drummer about them in advance! You can, of course, simply stop the click at some point, leaving the drummer and band free to continue playing at their own tempo, or to perform some big, tumultuous free-time ending. However, musical sync will be lost from that point on, and you shouldn't attempt to reintroduce the click without first giving a new programmed count-in — of which more in a moment. 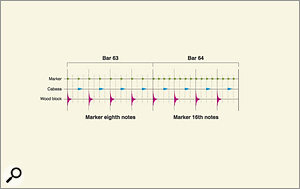 Figure 3. Using a marker sound to signal the beginning of a new musical section.Please don't put an accented note on the front of every bar — here's why: to compete with the insane racket generated by a drum kit, drummer's headphone clicks have to be incredibly loud. If you set your headphone level to accommodate the accented note at the start of every bar, you will struggle to hear the quieter, unaccented clicks in the rest of the bar. But if you turn your headphones up louder to hear those other beats, the accented first beat will blow your ear drums out of your nose, requiring an expensive mopping-up operation and incurring first aid bills! If, after a two-bar count-in, your drummer can't remember where 'one' is without having an accented note on the downbeat of every bar, I'd say it's time to get a new drummer!

You should be careful to check that the overall level of the click is the same from song to song. It is sometimes desirable to program quieter clicks for quieter songs, but such dynamic variations really need to be tested in a rehearsal situation. Thankfully, it's easy these days for drummers to be in control of their click volume by running it through a little headphone amp positioned next to their kit.

It is absolutely vital that the drummer hears a good positive count-in — this is an area where there is no room for error. I prefer a two-bar count, (ie: one... two... one, two, three, four). Figure 2 shows how I program it for tempos of 80-120bpm. With a count like this, the drummer can be absolutely sure where the all-important 'first beat of bar one' is. This sets him up nicely for bar two, during which he can bang his drum sticks together and bellow 'one, two, three, four!' for all the other musicians (and hopefully, the entire audience if you're playing live) to hear. For a few precious seconds, the wretched tub-thumper, butt of so many cruel jokes, is running the show. This is the drummer's moment of glory — do not deny it to him by programming a five-beat count-in!

It's also often helpful to program cues or 'markers' into the click track. (This hadn't occurred to me till I sat in for a drummer with a reputation for getting drunk on his gig, and realised, after checking his headphone mix, how it was that he could count all those bars without getting lost.) A marker is an additional sound designed to grab the attention, like a tambourine, cowbell or something even more startling — my colleague Dave Stewart sometimes uses a police whistle sample. This noise comes in loudly one or two bars before a major event in the song, like the ending. Alerted in this way, the drummer can be sure that he's in the right place. This is great for a long guitar solo (is there any other kind?) of, say, 64 bars — I don't want to have to count all those bars, but inserting a marker over the last two bars means I can forget about counting during the solo, get my warning cue on bar 63, then confidently cue the rest of the band by playing a fill on bar 64. If you program the marker as shown in Figure 3, it will really stand out. If you would like to replicate how I program my click tracks, feel free to download my click samples and accompanying MIDI files from my web site www.drumset.demon.co.uk.

Too Much Monkee Business — The Wrong Kind Of Subdivision

I did a session once where the producer wanted to remake 'Hey Hey We're The Monkees' for use in a film — I didn't have the nerve to ask why! He booked a very old-style analogue studio to get that authentic '60s sound, and turned up with a click track on a DAT tape. As you may remember, the basic feel of this song is triplet-based, and the drums play the classic swing hi-hat rhythm — 'ting tingka ting' — during the intro. The problem was that the producer had programmed a click which had four-in-a-bar cowbell with 16th-note subdivisions between each cowbell beat. There was no way to rerecord the click, because it had been worked out to synchronise perfectly with the film. In my youth, I learned to play Frank Zappa's mind-bogglingly polyrhythmic 'The Black Page', but trying to play 'ting tingka ting' on the Monkees theme tune against a relentless straight-16ths click was harder. I laugh when I tell this story, but it wasn't funny at the time!