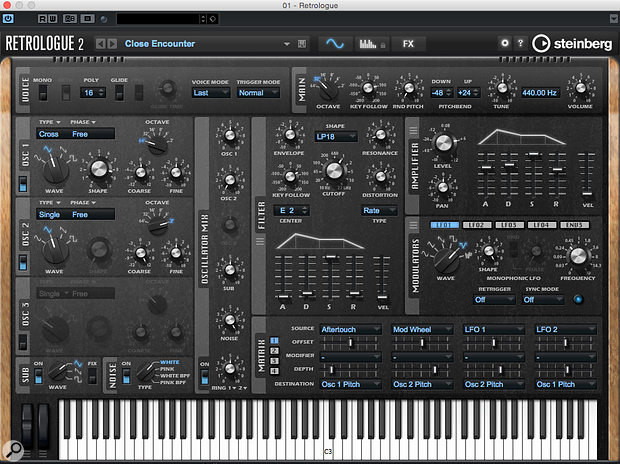 Retrologue 2: new, improved, powerful — but not as scary as it looks!

Cubase 8.5 introduced Retrologue 2, a powerful virtual analogue synth, and its presets are great — but rolling your own patches can be a lot of fun.

Retrologue, which arrived with Cubase 6.5, is a decent virtual analogue synth, but Cubase 8.5 brought an impressive update. The improvements in Retrologue 2 include a third oscillator, revamped and expanded LFO options, an additional envelope, a flexible arpeggiator, a three-band resonator and five new effects. Despite all the additions, all the key synth-engine parameters are housed in a single screen (there are two further screens for the arpeggiator and the resonator/effects options), so you won’t need a PhD in synth programming to roll your own sounds. We’ll examine the arp and effects options another time, but for now let’s see if we can squeeze ‘Retrologue 2 patch programming 101’ into this month’s two pages.

The main synth-engine screen is divided into a number of panels that, at first glance, host a complex control set. I won’t cover all of this in detail — the PDF reference manual does that well enough — but you do need to understand the overall structure.

The two panels across the top strip, Voice and Main, contain various global settings. In the Voice section, these include the Mono/Poly options, the Retr (retrigger) and Glide switches, and the Voice and Trigger Mode selections. The left-hand side of the screen is dominated by the sound sources, and it’s here that the signal chain starts, courtesy of: the three main oscillators, a sub oscillator (that tracks one octave lower than the note played on the keyboard), a noise generator and, at the bottom of the Oscillator Mix section, a ring modulator. The three main oscillators may be set to sine, triangle, saw and square waveforms but there’s huge flexibility to tweak them.

In terms of signal flow, the combined output from the mixer passes through the very flexible filter for further tonal adjustments. You can adjust the type/shape (some 25 options based around high-pass, low-pass, band-pass, all-pass and combinations of these), tweak the usual resonance and filter cutoff frequency controls, apply distortion (several types) and apply a dedicated ADSR envelope to modulate (change over time) the filter cutoff frequency. The depth of the envelope can also be influenced by the MIDI note (Key Follow) and MIDI velocity (the Vel slider).

The final stage (prior to any effects that are applied) is the amplifier section, which features an ADSR envelope with velocity sensitivity (setting the velocity slider to zero means the amplifier doesn’t respond to MIDI velocity).

All this leaves us with the Modulation and Matrix sections. It’s the modulation of a synth’s parameters that creates tonal (or other) variations in the sound as it is played (just as the filter can be modulated by its own envelope, as described above), so these two sections are important if you wish to create a sense of ‘movement’ in your sound. Retrologue 2 is very well served in this respect: you get four LFOs and a third envelope as additional modulation sources, options for modifying those modulation sources, and a huge list of modulation targets (destinations). You have 16 source-modifier-destination chains in total, and you can tab between the four banks of four within the display.

Loading the ‘Init Retrologue 2’ preset provides a suitably blank canvas with which to start your programming journey. This patch disables all the arpeggiator and effects features so you can focus solely on the main screen. To give our brief ‘Retrologue 101’ tour a focus, I’ll demonstrate how all this works by building a simple bass sound.

For a bass synth patch, toggling on the Mono switch in the Voice section, so the patch is limited to one note at a time, is usually a good start. Enabling the Retr switch means that if you continue to hold one note while you then play a second, the first note will be retriggered on release of the second note; this can be really handy for bass lines. For now, leave the rest of the Voice and Main settings at the ‘Init’ defaults.

The ‘Init’ patch sets a single sawtooth oscillator active, and the filter fully open (the cutoff is set at 22kHz) with zero resonance and zero distortion added (that is, the filter section is pretty much bypassed). The default amplifier envelope gives a rapid attack and almost instant release; a note is either on or off. Finally, the Matrix slots are all empty; there is no modulation configured. 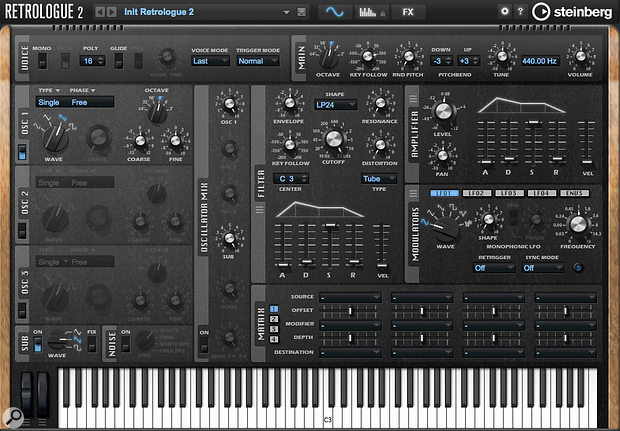 The ‘Init’ patch provides a blank canvas for your own programming efforts.

Lots of early analogue synths were built around only a single oscillator, and we’ll stick with that approach here, just to keep things easy to follow. Each of the four basic waveform types produces a different basic tone. The sine wave creates an almost hollow, nasal, sound, while the triangle waveform is fairly neutral but a little more ‘solid’. Both make a good start for a strong bass tone that will sit easily in a mix. In contrast, the saw and square waveforms are brighter and more aggressive, with the former having more body. These waveforms might be a better bet when you want a bass sound that’s a little more ‘dominating’. To work through this example, choose the saw option.

Fattening up your single oscillator sound — that is, making it more harmonically complex — is pretty easy in Retrologue 2. Pick ‘Multi’ from the Type dropdown and then set the ‘No’ (number) value to 2, and apply about 10 cents of pitch detuning via the Det knob. You can go fatter still with more extreme settings. Finally, switch the Sub sound source on to add a little weight and blend the levels of Osc 1 and Sub to taste using the mixer panel.

You should already have a pretty aggressive-sounding patch but let’s try applying some basic filter and modulation tweaks, just to give a flavour of what more can be done. As shown in the screenshot, set the cutoff frequency to 1 (kHz) and the resonance to 5. This filters out a little of the high end. I’ve set the filter Shape parameter to LP12 (a low-pass filter but less steep than the 24dB/octave option). Then set the Envelope knob to around 3 (the filter will then be gently modulated by the filter envelope) and set the envelope’s Vel fader to 100 percent and the S (sustain fader) of the envelope to around 60-70 percent.

This combination should get the filter responding to MIDI velocity (higher velocities produce a slightly brighter sound). By varying the A (attack) of the envelope (try a setting of about 1000ms so you can hear it clearly, but a lower value would be better for rapid notes), you can create a sense of the filter slowly opening as a bass note is sustained. Add a small dose of tube-based distortion and things should be coming along nicely.

The amplifier envelope settings can probably be left ‘as is’. The fast attack, decay and release settings mean that the sustain setting dominates; a note is fully ‘on’ as soon as you hit it and ‘off’ as soon as you release it. I’ve set the Vel slider to around 50 percent so that MIDI velocity gives the sound some volume dynamics. This can be adjusted to suit the performance style, but a synth bass with too much by way of volume dynamics can often prove more challenging to control in a mix. 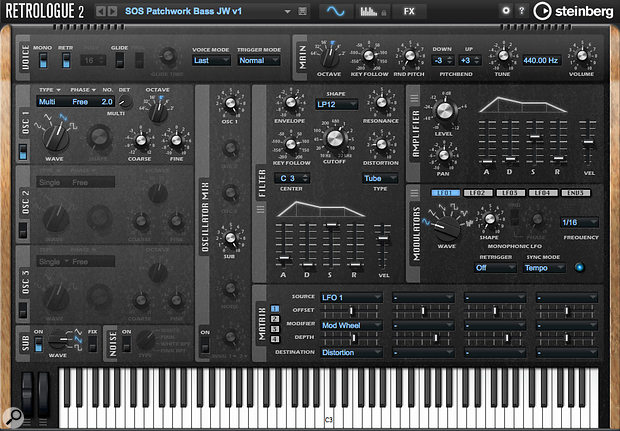 Our finished bass patch: a single oscillator, a little sub, and some filter and distortion modulation — and all set up in just a few minutes!

While the filter envelope is already modulating the bass sound as a note plays, Retrologue provides plenty of other modulation possibilities. The screenshot shows one simple example to get you started. Here, I’ve used LFO1 set to follow the project’s tempo at 16th notes using a simple sine waveform. In the Matrix pane, this LFO is set as the modulation source for the distortion level. I’ve then set the Depth control to a very modest 10 percent. In the absence of any Modifier, with these settings, LFO1 would add a sort of tempo-sync’ed ‘beat’ to the sound as it modulates (changes) the distortion level. However, by adding the mod wheel as a modifier, the intensity of this effect can be changed via the wheel while playing. We now have a very playable monophonic bass synth patch. This is a very simple example, but it demonstrates the potential of the modulation system for adding the sorts of tonal changes to a synth sound that give it an extra sense of ‘life’.

This workshop has barely scratched the surface of what Retrologue 2 can do, but what I hope it has demonstrated, especially for those who don’t see themselves as synth experts, is that despite the fairly busy control set, Retrologue is very easy to experiment with. No presets involved and, with just a few minutes work, you created a new sound for your music. How cool is that? Next time we’ll dive a little deeper!