Whether you’re going to EQ bracket or not, it’s a good idea to check and possibly correct the phase relationship of multi-tracked bass recordings.

When it comes to mixing bass, sometimes more is more, and Cubase has all the tools you need...

The electric bass guitar often has to provide a mix with both low-end solidity and mid-range aggression, but setting up an instrument/amp to deliver both is tricky: drive the amp for a more mid-range character and you can sacrifice low-end definition and solidity. When playing live, respected players such as Chris Squire, Geddy Lee, Doug Pinnock and Billy Sheehan get around this with dual amp setups; a clean amp provides a well-defined bottom end, while a second is overdriven for more aggression in the mids. In the final part of his Making Modern Metal in SOS March 2018 (http://sosm.ag/modernmetal3), Mark Mynett describes a similar tactic that’s often used in the studio: the bass is multitracked, and high- and low-pass filters are used to ‘bracket’ a specific range of frequencies on each track; you process each range individually and blend them together to create a composite sound.

To attempt this in Cubase, you need a bass part recorded to two audio tracks. This could be a traditional mic-plus-DI recording, or you could use duplicate DIs and treat one with a virtual amp, such as Cubase’s VST Bass Amp. Although the EQ brackets focus each part on a specific range, there’s still some overlap, so start by checking the phase relationship of the two parts. Phase-cancellation issues, in which the blended sound appears ‘hollower’ than either sound on its own, can be tackled most easily by disabling snapping, and then shifting one track’s part along the timeline. If you want to see what’s going on, zoom right in on the waveform, but you must use your ears!

The screenshot above shows an amped track that benefitted from a slight negative shift along the timeline, and polarity inversion via the ‘phase’ switch in the MixConsole’s Pre rack; the hollowness disappeared and my blended bass sounded much more solid.

Let’s explore what EQ bracketing can do. There are many options, but with our DI and amp tracks now in phase a good starting point is to insert Cubase’s Frequency EQ plug-in on each track. In the screenshot example, DI provides only the solid low end, so I’ve rolled off everything above 175Hz (the ideal frequency will vary, but it will usually be in the 150-200Hz area) using a 12dB/octave slope, and everything below 50Hz at a gentler 6dB/octave. As we’re dealing with multiple tracks, I used Frequency’s linear-phase mode. For the amped/driven track, I rolled off everything below the same frequency (175Hz). I also added a little 4kHz boost, which I find often helps to bring out note definition created by the fingers or pick. Finally, I rolled off everything above 8kHz, where the bass contributes nothing particularly useful.

Cubase’s Frequency plug-in provides all the control and visual feedback you need to EQ bracket your bass tracks. Here, the DI and amp recordings are set to crossover at 175Hz.

With the parts restricted to their own range, dynamics control can be applied. I chose Cubase’s Vintage Compressor for the low-frequency DI part, and the Tube Compressor for the more characterful amp track. An amp often compresses the sound a little but DI’d bass can be very dynamic, so don’t be afraid to apply plenty of gain reduction to the DI to nail down the low-end. You can bus the two tracks to a dedicated Group Track, on which you can apply further dynamics processing to and level automation of the composite sound. 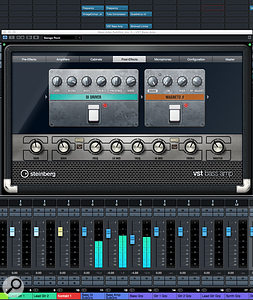 Steinberg’s VST Bass Amp plug-in can be a great means of adding character to your lower-mid/mid bass track.With the two tracks operating in different ranges, the faders can be used to create the desired balance. But the fun really starts when you experiment with the amped part, free from concerns of low-end solidity. I selected the Tube Compressor for this track due to this processor’s Drive control, which allows you to push a slightly overdriven amp sound like this one that bit harder — you can be really assertive if you want, without the overall bass sound becoming a fuzzy, blurry mess.

You could use any saturation plug-in in the same way, and if your amp tone is fairly clean you could go the whole hog and use your favourite amp-modelling plug-in. VST Bass Amp is nice, but as we’ve rolled off the low end and focused on the mids, why not try a VST Amp Rack guitar amp model instead?

We’ve only used two bass tracks so far, but there’s nothing to stop you using a third. In addition to the low-end DI, you could use two tracks, with a bracketing ‘crossover’ around 1500-2000Hz, to give you separate control of the low-mid/mid region and the upper-mids. (The upper-mids track would be the one with the 4kHz EQ boost for finger/pick noise).

For a flexible rock tone, a good starting point is to keep the low-end track (below about 175Hz) clean, to use VST Bass Amp to apply some moderate overdrive/saturation to the low-mids track (175Hz to 2000kHz), and then get as gnarly as you like on the upper-mids (2000Hz and up). Again, VST Guitar Rack is ideal for this last role, and blending this third track in alongside the others can bring a wonderfully aggressive edge to the sound, while leaving the overall bass sound solid and well-defined. 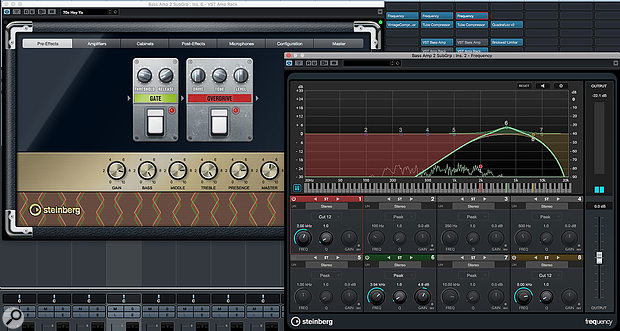 A third bass track, with a crossover with the second track at around 2kHz and an instance of the VST Amp Rack inserted, can provide useful control of the upper-mids.

EQ bracketing for bass guitar can also bring some benefits to the wider mix process. For example, it can be easier to get the fundamental of your kick drum and bass guitar working together, simply because you can focus on how the kick works with your low-end bass guitar track, without changing anything about the bass’s mid-range qualities. And your low-mid/mid bass track, and upper-mid track if you have one, can be fine-tuned to work better with any guitars in the mix, without affecting the mix’s low-end.

Setting up multiple bass tracks obviously requires a little extra work, but for lots of rock styles it’s one of those rare cases where more actually is more. And, while you can use any third-party EQ, compression or amp sim plug-ins for the task, as shown here, Cubase’s own plug-ins are more than up to the job.