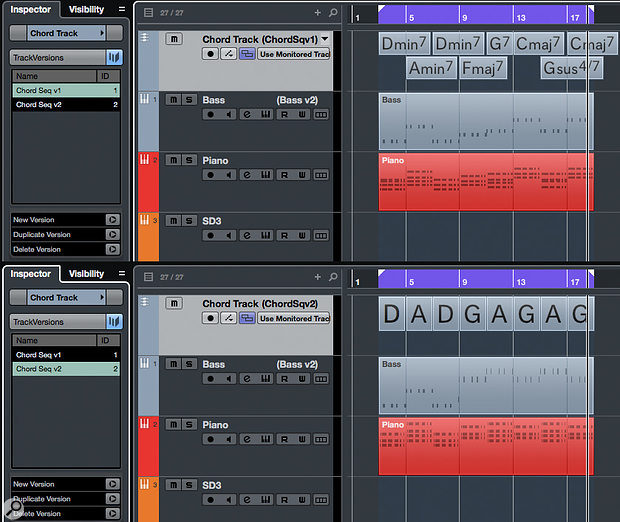 If you like to explore different versions of a song (or just have difficulty making your mind up!) Cubase’s Track Versions have a lot to offer.

There’s a strong argument for committing to sounds and performances when recording rather than putting off decisions forever, but you won’t always enjoy the clarity of musical thinking this approach requires. And you might, in any case, just wish to explore alternative musical ideas in a project. In such circumstances, you can create multiple projects, of course, but Cubase Pro or Artist (7.5 or newer) offer you the ability to experiment with alternative ideas within a single project: the Track Versions and the related Track Lanes facilities both have their merits for basic comping, but Track Versions also has creative potential. So, whether you can’t make your mind up, or you desperately want to create both Rockabilly and Death Metal variants of the same song, let’s explore how Track Versions can help.

(Not) Making Your Mind Up

Naturally, Track Versions work with audio tracks, but the feature also supports MIDI, Instrument, Chord, Tempo and Signature tracks. In all cases, the basic concept is straightforward: a single track in your project can access multiple ‘virtual tracks’, each with different content — rather like some hardware digital recorders of days gone by. You can easily switch (for example, via the Track Versions tab in audio and MIDI tracks’ Inspector) between the different Versions, as you consider which works best.

One benefit is that you don’t have to create multiple tracks, with resource-draining duplicates of plug-ins, if you want to audition a different performance. And, as shown in SOS December 2014, Track Versions also handle things like multitracked drum recordings neatly, especially if you place all of these tracks in a Folder Track and add the benefit of Group editing.

The Track Versions feature makes Chord Track experimentation easy: rather than manually edit individual Chord Track chords (and edit them back if you dislike the results), you can create your alternate chord sequences on multiple Track Versions and simply switch between these to audition how they sound. If you change the Chord Track contents in this way, your MIDI and monophonic audio tracks’ contents can be set to automatically adjust to follow these changes (or certainly make a good enough stab at it that you can audition how well the alternative chords might work).

A simple example is shown in the first screen. The Chord Track’s Track Versions Inspector shows that two different Track Versions are present. These contain very different chord sequences (the more complex one shown on top, and a much simpler one shown below). Switching between these simply requires you to click on the desired version in the panel’s list. When you do that, the two MIDI tracks (containing bass and piano parts in this simple example), both of which are set to follow the Chord Track, automatically self-adjust to work with the currently selected chord Version.

The Track Versions panel includes options to create a new Track Version, duplicate an existing one or delete one that’s no longer required. In this application, duplication is helpful if you just want to experiment with changing one or two chords, rather than creating a completely different sequence.

Track Versions are supported in most track types, including the Tempo Track.

Cubase’s Tempo Track can be used either to lock freeform audio recordings to a regular click or to apply tempo variations to recordings performed to a click track (see the SOS January 2013’s workshop for an introduction to this). The latter, for example, might allow you to bump your chorus tempo by a few bpm to add an extra element of excitement to a performance.

Given that Cubase can (within reason!) force audio and MIDI tracks to lock to tempo changes, the Tempo Track makes experimenting with tempo variations relatively easy. And as Track Versions support this Tempo Track, you can get just as experimental with the tempo on a new Track Version as you can with chords — safe in the knowledge that your original Tempo Track will remain instantly accessible.

A more obvious application for Track Versions is recording alternative performances of individual parts. For instance, if your bass player suggests two different approaches to the bass line, each can be recorded on a single audio track as a different Track Version. This has the advantage of avoiding duplication, both of the tracks themselves and of any insert effects (assuming the parts are similar enough to require identical processing!). It also means much less annoying clutter in the Project and Mix windows, given that the additional tracks would spend much of their time muted. In addition, switching between Track Versions (via the Inspector’s Track Versions panel) is quicker than performing the mute/unmute actions that are required to switch between two different tracks.

I find two vocal-based applications particularly useful. First, if you tend to track into Cubase as part of your composition process, you can use Track Versions to record multiple versions of your lead vocal, as the lyrics or performance/melody evolve. Second, once you’ve settled on a vocal performance, if that happens to include a few choice words, Track Versions can be used to record both the ‘original’ version and a ‘clean’ version. You can simply create a duplicate Track Version from the original and use that to drop in where the more choice words need cleaning up for family listening. Providing you record both vocals under the same conditions (so they require similar processing), this makes it very easy to generate both your ‘album’ mix and a suitable radio-friendly one.

Lanes are supported for each Track Version, giving you tremendous flexibility.

Incidentally, the Lanes system and the Track Versions system can both be used in this kind of situation, and they can be used together. Every Track Version gets its own set of Lanes, and you can therefore use the excellent Lanes-based comping features to optimise each Track Version. That said, you can also do basic copy and paste actions between Track Versions should you wish.

Of course, the principle described above for a single track such as a vocal or bass can also be applied to a whole project. Two obvious examples can be suggested here. First (and despite my tongue-in-cheek Rockabilly/Death Metal suggestion earlier), you might wish to try alternative versions of a song. Providing the differences are not so extreme that different processing is required on each track (in which case an alternative project might be a better choice), Track Versions can make this kind of experimentation straightforward. Second, if this is a band-based project, and you like to start with an old-school, ‘live’, multitracked, recording, Track Versions can be used to record each live take. You can then easily flip between each multitrack version until you decide which take is the ‘keeper’ to form the basis of any subsequent overdubs.

Version ID makes it easy to link Track Versions across multiple tracks and switch between them as a single action.

Once the various tracks are selected, you can easily flip between their common Track Version IDs via the same Track Header drop-down; change one and all the other selected tracks follow. Oh, and as you can also select any combination of tracks and then execute the Project/Track Versions/Assign Common Version ID command, you can easily change the default version ID to ‘group’ any combination of tracks/Track Versions to allow instant recall. Very neat!