In this month’s Logic technique column, we look at two different ways to create guitar sounds that have a lot of stereo width. To create a wide stereo guitar sound we need to convert a mono guitar signal into a stereo signal and then introduce differences between the left and right channels. Simplistically, it is the differences in time, timbre and pitch between the left and right guitar channels that give a stereo guitar sound its width (see http://sosm.ag/jan11stereowidth for more detail). 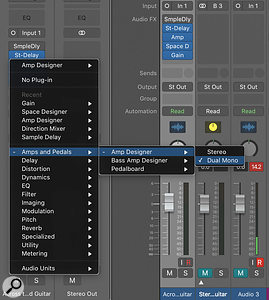 Let’s begin with a mono direct guitar sound and transform it into an ultra-wide stereo guitar sound using dual mono processing. There are many things you can do with dual mono processing, however in this example we will take inspiration from guitarists who split their guitar signal into two separate guitar amps: one for the left channel and the other for the right.

Add a mono guitar recording and let’s begin by transforming the signal into a stereo signal. To do this instantiate Logic’s Delay / Sample Delay / Mono->Stereo plug-in, but don’t change any settings. We will return back to this later on. Next, let’s create the illusion of two guitar amplifiers in a room. From Logic’s insert menu choose Amps and Pedals / Amp Designer / Dual Mono (see Screen 1). When a stereo audio signal in Logic is run through a Dual Mono plug-in, Logic effectively creates two mono instances of the same plug-in — one for the left channel and one for the right channel. At the top of the plug-in you will see the edit mode buttons. The L button selects the left channel and the R button selects the right channel, whereas choosing Couple will adjust both simultaneously (see Screen 2). Clicking the settings icon to the left of the L button allows you to bypass either the left or right insert, or switch the processing from L/R to Mid/Side. Load the Clean Jazz Fat preset. This will load the same setting onto both channels. Set the edit mode to Couple and tweak the amp and cabinet to taste. Next, click the R button and choose a different amp and cabinet for the right channel. This will create a contrasting guitar sound to the left channel. Listen to it in isolation by simply panning the main channel strip hard right. Balance the left and right level by tweaking the Master Output parameter of the amp. You should now have a satisfyingly wide stereo guitar sound.

Screen 2: If you have instantiated a Dual Mono plug-in then you can switch between editing the left channel or right channels by clicking the L and R buttons, or edit both at once using the Couple button.

Now we will use a reverb plug-in to place the right channel further away in a virtual room. Load a Dual Mono instance of Logic’s Space Designer plug-in after the Amp Designer. Load the Small Spaces / Rooms / Recording Room preset. Click the L button in the plug-in header to edit the left channel and set the Dry level to max and the Rev to 0, so that the left channel has no reverb on it. Next edit the right channel and this time set the Dry setting to -20dB and the Rev to -20dB so that the right channel has a wet guitar sound like a single room mic. Hit play and marvel at your wide and reverberant guitar sound. It’s worth taking the time to try out different Space Designer impulses as the characteristics of the room will have a significant bearing on the end result. Once you have your basic stereo guitar sound, experiment by augmenting it with effects. Try adding a small amount of pitch shifting or chorus modulation to one side using a Dual Mono instance of those effects plug-ins (you can add the effects before or after the amp simulation).

Another way to add width to your guitar sound is to introduce a difference in time between the two channels. Open the Sample Delay plug-in that is in insert slot 1 and set the Delay Right time to 850 samples. Now listen to the difference with the plug-in both on and off, paying attention to the width of the guitar sound. Experiment with different delay times and you’ll find times above 35ms start to sound like a delay rather than an increase in width. If you are a fan of the Edge and those types of stereo guitar sounds with two delay units, then try adding a stereo instance of Logic’s Stereo Delay plug-in after the Sample Delay plug-in. Then, load the Dual 1/8 Note Dotted preset and tweak the Output Mix Left and Right sliders to taste.

Let’s now look at an alternative way to achieve a wide guitar sound using a Track Stack as a container. This feature will allow you to save and recall the guitar routing we will set up inside it. The Track Stack will contain an audio track that will be the mono guitar source feeding two busses that will be used to split the guitar signal into left and right channels, each with their own respective amp and effects chain. Create a single mono audio track and name it Guitar Source, and add a mono audio file of a DI guitar to it. We will use this track as our source. Next, on the Guitar Source channel strip create two pre-fader auxiliary sends and set each send to 0dB. Go to the Mixer and select the two busses you just created. Ctrl-click on one of them and, from the drop-down menu, choose Create Track. We will use these two busses as channels for left and right virtual guitar amps. Now label the track for the first bus Guitar Left and pan it hard left, and repeat this for the second bus (label it Guitar Right and pan it hard right). Lastly, turn down the fader of the Guitar Source track and hit play — you should see and hear your guitar recording through both the Guitar Left and Guitar Right busses. 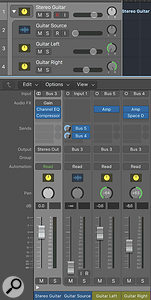 To finish, let’s create the Track Stack itself. We will use the Track Stack’s channel strip to add overall processing to the stereo guitar sound, and as a container to save our guitar setup as a preset. Select all the guitar tracks, Ctrl-click one of them and from the drop-down menu choose Create Track Stack. From the pop-up, choose Summing Stack and click Create. Rename the Track Stack to Stereo Guitar. On the Stereo Guitar channel strip add an instance of Logic’s Gain insert plug-in to the first insert slot. Open the plug-in window and set the Mono button to On. This will sum your guitar track to mono and will give you a quick and easy way to check the mono compatibility of your stereo guitar sound. Ideally your guitar will have the same timbre in mono as in stereo with no unpleasant cancellation. If this is the case, bypass the Gain plug-in. If you do get unpleasant cancellation, try moving one of the virtual microphones in the Amp Designer plug-in or use the Sample Delay plug-in on one side to decrease the cancellation. Next add an instance of Logic’s Channel EQ and Compressor insert effects to the Stereo Guitar channel and assign these to smart controls so you can easily tweak the overall EQ and compression of the guitar track (see Screen 3). To save the completed Track Stack so that you can use it in other projects, open the Library and click the Save button in the bottom right-hand corner. From the pop-up window name the preset Stereo Guitar and click the Save button. You can now recall this preset in a new project by going to the Library / User Patches area and clicking on Stereo Guitar.

There is a lot more experimentation you can do with stereo guitar processing beyond the basic setups covered here. For instance, you could create much more experimental chains with more dramatic effects on each side for more striking results.