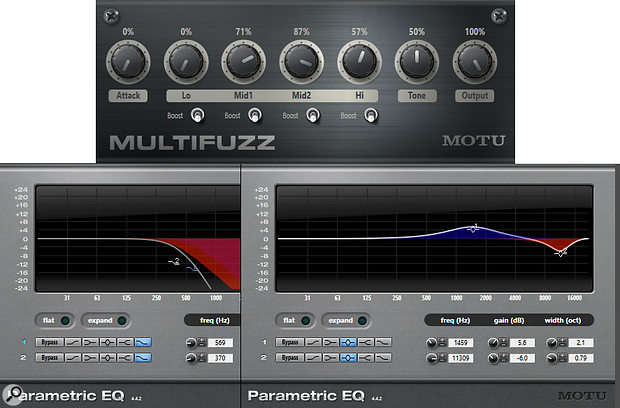 Screen 1: MultiFuzz recreates my old QuadraFuzz. It's flexible in its own right, but EQ can make it even more so.

Many of DP's emulated guitar pedals offer even more than the real thing!

In the SOS January 2019 DP column, we covered the virtual amps and amp rooms that were introduced in Digital Performer 8. But that's not all that DP has to offer guitarists: there are also stompboxes, and some new processors introduced in DP9. As we'll see, one or two of DP's other plug-ins can also prove unexpectedly useful with guitars...

Many of DP's stompbox plug-ins pay homage to vintage models, but there's more to the story, because some of them reproduce not only the original circuit but also popular modifications to it — so even if you're using a third-party amp simulator, it's worth checking out the MOTU versions of the stompboxes. For example, the Tube Wailer and Über Tube distortion pedals have a switch for choosing between the characteristics of the stock silicon diodes and the germanium diodes that some users replaced these with. Germanium diodes clip at a lower level that gives less output, but produce more distortion over a wider range of input levels. The Distortion Plus pedal, meanwhile, has a Load Z control, which varies the simulated output load from a low-impedance combo amp at one end of the scale to a 1MΩ high-impedance input at the other. Likewise, a Source Z control emulates input impedance changes. The effect of both controls is extremely subtle.

The MultiFuzz is new to DP9, and as the documentation says, it's a "spot-on reproduction of Craig Anderton's legendary QuadraFuzz multiband distortion kit from decades past... the results range from sublime warmth to absolute filth". So I think I'm qualified to say the company did a fine job of recreating the QuadraFuzz. (In today's world I wouldn't blame anyone for being cynical, but I like the MultiFuzz because I like it. I didn't and don't receive any compensation, other than being glad to see another version in plug-in form.)

The MultiFuzz splits the guitar into four bands and distorts each one individually to minimise intermodulation distortion. It's designed mostly for big power chords, which can benefit from EQ afterward, and sometimes before. In Screen 1, I'm pairing it with two instances of the Parametric EQ plug-in. The output EQ (right) increases articulation and removes some high-frequency fizz. Add the input EQ (left), and the sound becomes beefier and darker. But there are a huge number of possible combinations, so before getting too involved with EQ, play with the levels of the four bands, the drive (Attack), and the boost switches and tone control to get a sense of the possibilities.

As well as offering pedal emulations, DP also departs from convention with three synth-type effects. MegaSynth is the 'full fat' version, of which MicroG (for guitar) and MicroB (for bass) are simpler derivatives.

MegaSynth is a subtractive synth, with your guitar's signal replacing the oscillators. It has four layered 'voices': the dry guitar (Input), Square Wave at the fundamental frequency, Octave (higher) and Sub Octave (lower). Each output can feed one of two filters, or a VCA. Note that although each voice can feed only one of these modules, the modules themselves can accept more than one voice.

The filters have cutoff and Q (resonance) parameters, while the Amp has gain and, if you're using the mono-to-stereo version, a pan control. All of these parameters can accept modulation, which can come from one of two envelopes, one of two LFOs, a pattern of constant-amplitude pulses (you can't vary the level for each step), or an envelope follower.

MegaSynth is polyphonic, but the effects you place before or after it can optimise the sound for chords or single notes. For single-note leads or bass parts, placing the Dyna-Squash compressor before the MegaSynth gives a more even, consistent signal with more sustain. Inserting a ParaEQ 4 afterward can tailor the sound for specific applications.

Screen 2 shows example settings for a synth bass sound. I've inserted a pre-MegaSynth Dyna-Squash to make the sound more 'solid'; then, in the synth itself, I brought the Sub Octave gain up full so that it provides the sound's backbone, and routed it to Filter 2. Envelope 1 then triggers Filter 2's cutoff with zero Attack, Sustain and Release, just Decay — so, when you hit a note, there's a quick attack, and then the bass settles down to the timbre set by the filter cutoff control as the note sustains. The square-wave signal at the guitar's fundamental goes into Filter 1, which is also modulated by Envelope 1. However, both the gain and cutoff frequency are considerably lower than for Filter 2. The intention here is to give just a little attack above the Sub Octave to add a taste of high-frequency 'fizz'.

Where you route the Input, and at what level, has a major sonic influence. In the screenshot, it too is feeding Filter 1, blending in with the Sub Octave to give a fuller sound; routing the Input directly to the Output gives more of an 'eight-string bass' effect from adding the guitar's fundamental. Routing the Input to Filter 2 gives a similar effect, but because the filter makes the guitar bassier, it sounds 'rounder'.

As Screen 3 shows, MegaSynth can also create a convincing octave-above effect, like the old Octavia pedals. The effect is most dramatic from about the ninth fret on up, because then it doesn't sound like you're just playing higher up on the neck. I've placed RXT Distortion in front of MegaSynth to give it a distorted, sustained signal to work with; turning the RXT's Filter knob up creates a mellower tone (yes, it's counter-intuitive, but that's the way the original Rat distortion worked), which can make MegaSynth happier. 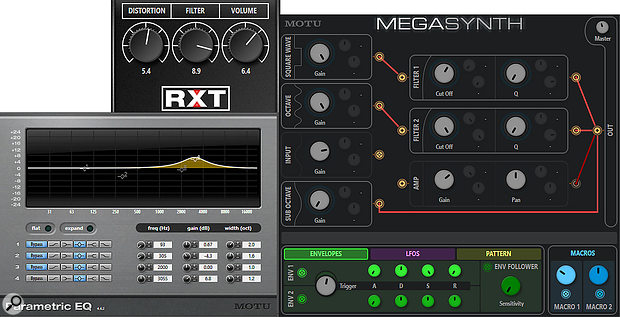 Screen 3: These settings recreate an 'octave above' doubler effect.

MegaSynth's square wave feeds a filter, with the cutoff trimmed so the highs don't dilute the effect of the Octave sound. Although you can feed the Octave signal directly to the output, routing it through Filter 2 gives the option to play with the cutoff and/or Q controls. Also, sometimes you might want to blend in the Sub Octave when you want a thicker-than-usual sound, so you can route that to the output.

My post-MegaSynth EQ uses a single stage to give a substantial upper mid-range boost around 3kHz, emphasising the octave-above component. As with all lead sounds, a little bit of echo or reverb goes down well too, and of course you'll find delay and reverb effects among the roster of processors as well.

'S' Is For Amplifier

Finally, although it's not intended for use with guitars, a de-esser can be surprisingly effective at helping you customise the sound of your amp simulator. DP's bundled De-Esser is particularly useful as it can be made to behave like a dynamic EQ, and its range hasn't been limited to only high frequencies — you can process frequencies ranging from 24Hz to 16kHz. For example, if you try to boost the treble too much on an AC30-style amp, the sound becomes harsh and screechy, so you need to be realistic about how bright the sound can be. However, you can insert the De-Esser before the AC30 to control the brightest incoming frequencies, and then apply a treble boost to the AC30's output to give a sweet brightness you wouldn't be able to obtain without the De-Esser. The De-Esser is also useful for reducing potential harshness with high-distortion amp simulators, like DP's Soloist. Inserting before the amp can tame high-frequency peaks so the simulator concentrates more on distorting the bass and mid-range instead of the highs. It's even possible to obtain more of a single-coil sound from humbuckers by 'de-essing' in the 300-500 Hz range.