Fancy using the multi‑touch screen of your iPhone, iPod Touch or iPad as a DP control surface? Here's how... 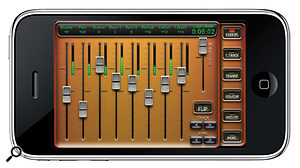 Thought you could never afford a Mackie Control for your DP rig? Now, if you've got an iPhone OS device, you probably can, courtesy of AC7 (left) and AC7 Pro. 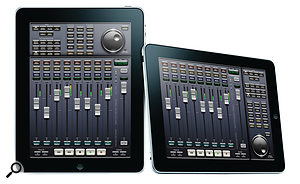 As a Digital Performer user, you may already have an iPhone, iPod Touch or iPad to complement your Mac, and there's now a way you can use it directly in conjunction with DP, by turning it into a really capable control surface that emulates a Mackie Control.

Saitara Software are Scottish developers of iPhone OS apps, and they've released two that act as DAW control surfaces. AC7 ($5.99) is for the iPhone and iPod Touch, while AC7 Pro ($9.99) is specially designed for the iPad. They're both available from the App Store in the normal way, via iTunes.

Getting started with AC7 is a little bit more involved than you might think. First off, some requirements: you need to be running DP version 6.02 or later, and your Mac should have Airport enabled. Then you can go to www.saitarasoftware.com's Setting Up page, download the latest version of the DSMidiWifi application that's linked to from there, and drag it into your Applications folder. This is a tiny utility that was originally written to interface with the Nintendo DS, but works great with the iPhone and iPad too.

You can ignore some of the other recommendations on the Saitara web site and next go to http://jacklinstudios.com/downloads/DP‑AC7‑DSMidiWifi‑Bridge.html. From there, you can download and install DP‑AC7‑DSMidiWifi‑Bridge (which undoubtedly wins the 'application with the longest name on my Mac' award). This little utility was written by DP guru Kelly Jacklin, whose very useful DVLatencyAdjuster application I featured in my DP column a few years back. It simplifies the whole experience of setting up AC7 with DP, and provides some extra features, such as dynamic track naming in the AC7 app.

Start up the DP‑AC7‑DSMidiWifi‑Bridge app. It should ask you to locate the DSMidiWifi app, and when you've done that, it launches the app. That will happen automatically every time from now on.

Now to launch DP (or relaunch it, if it was already running). Create a new empty project (which you can bin in a minute, if necessary). This enables you to choose 'Control Surface Setup'... from the Setup menu. How this window appears varies a little between different versions of DP, but the principle's the same. Click a '+' (plus sign) button to add a new control surface 'slot'. Choose 'Mackie Control' in the Driver pop‑up menu, then 'DSMIDIWiFi‑out‑1' in the pop‑up menu that's marked MIDI (in DP 6.02‑7.1) or Input Port (in DP 7.11 and later). Once you've done this, OK the dialogue and quit DP. Quit DP‑AC7‑DSMidiWifi‑Bridge too. 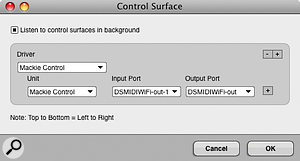 Telling DP about AC7 is a crucial step in getting it to work. Here's how the Control Surface Setup dialogue looks in DP 7.12.

Everything so far has been basic setup stuff, and you're not going to need to do it every time. How you actually start using AC7 with DP depends a little on how your Mac is set up, and whether you want AC7 to be a heavyweight mixing aid or just a simple tracking assistant that sends a few transport commands and tweaks a couple of track levels.

If your Mac is already connected to the Internet via a wireless router, the laziest approach is to do nothing: communication between AC7 and DP can take place via your router. There's the potential for some flakiness and control latency this way, but if you have good signal strength it can work well enough. Here's how it goes:

1. Make sure both your Mac and iPhone, iPod Touch or iPad are connected to your wireless network. On an iPhone OS device, you configure that in Settings app / Wi‑Fi.

As soon as DP loads a project, AC7 should spring to life, with faders flying to match DP Mixing Board settings. Then you're off!

If this isn't providing crisp enough response, you'll need to hook up your Mac and iPhone, iPod or iPad directly. A simple way is to go to your Mac's Airport menu and choose 'Create Network.' Click OK for the next dialogue box, which simply prompts you to give the network a name. (If, by any chance, you don't happen to have an Airport menu, you can get one by going to System Preferences / Network, selecting 'Airport', and ticking the 'Show AirPort status in menu bar' tick‑box. Connect your iPhone OS device to this network, again via Settings / Wi‑Fi, and you can then do steps two and three above.

The down side of this method is that it disrupts your Internet connection if you normally use Airport to connect to the Internet. After you've finished with DP and AC7, you'll have to go to the Airport menu, select 'Disconnect from' the network you created, and choose your normal router. It'll be the same story for the iPhone's connection. In return, AC7's response is much snappier: ideal if you've got an iPad and have a six‑hour mixing session scheduled!

AC7 itself sports controls that are found on a real Mackie Control, so some of them use terminology that's different to that found in DP. The main thing to note is that there's a dedicated DP mode you access using the Mode key, which is in the 'Transp' view of AC7 and above the master fader of AC7 Pro. To gain control of your pan pots, touch the 'Flip' key, and then the faders will represent pan positions vertically. Just like a real Mackie Control, AC7 displays a maximum of eight faders at a time, so to access further tracks, use the Track left and right arrow keys to shift along AC7's fader 'view' one track at a time, or the Bank left and right arrow keys to do it in blocks of eight faders. Finally, iPhone/iPod users might want to note that the RTZ (Return to Zero) key, which shuttles DP playback position to the beginning of the sequence, is in the AUT/TR screen. Users of iPads can find it in the Transport key group. Beyond that, DP's Mackie Control PDF is essential reading, and you can get to that via Help menu / Control Surfaces Help.

Although starting out with AC7 can feel like a little bit of a struggle, it's nothing short of a revelation when you're used to it and you've found your preferred way of working. Saitara are continuing to hone AC7's DP compatibility, and James Steele of the Motunation forum has made huge efforts in getting the combo off the ground and supporting Saitara's efforts. His excellent PDF tutorial, which can be downloaded at http://jamessteele.com/dp‑ac7pro, discusses some more network options, including possibilities if your Mac doesn't have Airport, and will be a good read especially if you're experiencing any difficulties.

Merge Soundbites makes one long soundbite out of multiple shorter ones, and has a variety of uses.

Merge Soundbites, a command in the Audio menu, is a long‑standing DP feature that does what it says on the tin: generates one long, unbroken new soundbite from any number selected. If there are gaps between the soundbites, Merge Soundbites fills those with 'silent' audio, and if you've applied fades, crossfades or Bite Gain alterations, those will be 'frozen' into the new soundbite. It's handy for simplifying a region with lots of edits, making it easier to handle for repositioning, duplication and looping — and for subsequent editing.

Before DP 7.1, you'd make a time‑range selection across the soundbites you wanted to merge, then DP would create the merged region starting and finishing at the outer edges of the first and last soundbite. Now, though, Merge behaviour has changed, with DP merging the entire time‑range selection and generating regions of silent audio outside the boundaries of the first and last soundbites, if that's what you've specified.

Why is this important? Well, if you're used to the old method and want to keep working in a similar way, you need to modify your approach. Try using the cross‑hair cursor or I‑Beam tool and dragging to make a time‑range selection just within the outer edges of the first and last soundbites. Then, with the arrow tool, shift‑click the upper portion of the first and last soundbites to add them to the selection. This gives you a time‑range selection that's exactly aligned to the soundbite boundaries, and then you're good to Merge.

But the new scheme has one major advantage, which can be massively useful for exporting your DP project ready for mixing in another DAW, perhaps, or for belt‑and‑braces archiving. Start by freezing any tracks that already have effects on them, along with virtual instrument or external effects tracks. Then hit Apple‑A to Select All, and then use Merge Soundbites to create continuous audio tracks that are the same length, spanning the entire sequence and all neatly aligned at the start of the sequence. Just locate them in the Project's Audio Files folder (try DP7's Reveal In Finder command, in the Audio menu) and send them to your collaborator, or archive them, as necessary. As simple audio files, they can just be dragged into any other DAW and aligned to the same time position, with no cross‑format export/import headaches.